Stepping into the silky waters of Iceland’s new blockbuster geothermal pool: Sky Lagoon features a 250ft-wide infinity-style edge and ‘one of the world’s most stylish swim-up bars’

There’s magic in the air as I step into Iceland’s gloriously warm geothermal waters. Stars shine in the early evening sky and clouds of steam momentarily cut me off from the other guests.

It’s an experience you can really only have in Iceland. But I’m not in the geothermal waters of its world-famous Blue Lagoon. Instead, I’m in Sky Lagoon – a new, more intimate pool set in a rocky headland on the very edge of Reykjavik. 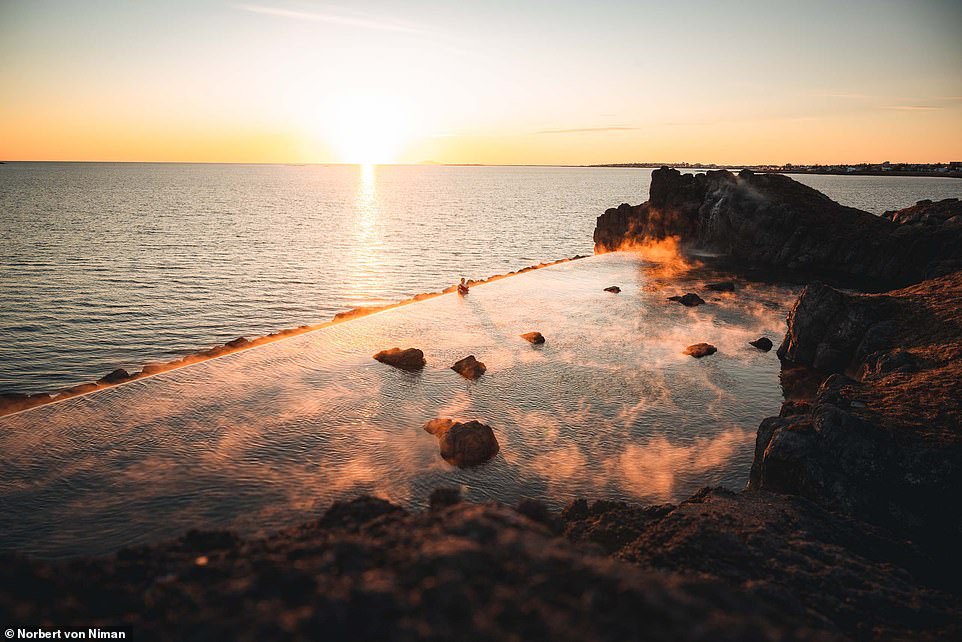 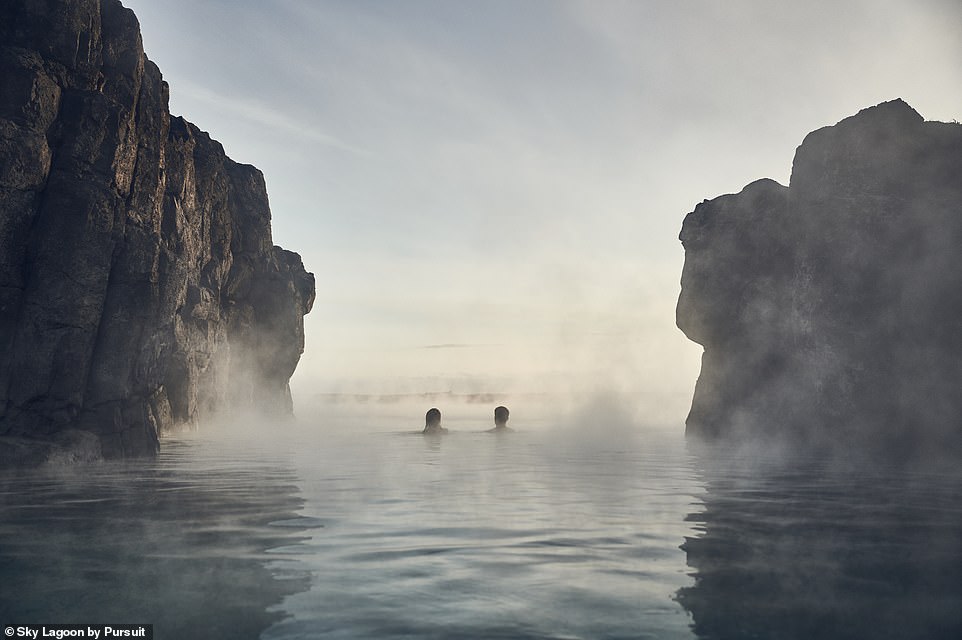 Neil describes Sky Lagoon, pictured, as an ‘intimate pool set in a rocky headland on the very edge of Reykjavik’

Less than a year old, it doesn’t make a great first impression. On your way there you’ll pass a lot of ugly warehouses, but turn the final corner and everything changes.

On a promontory that looks like the edge of the world, there’s a dark, hulking, low-slung reception building. The walls are made of blackened timber and volcanic bricks. The angular roof is covered in hardy, snow-topped turf.

Inside is a warm but shadowy world with the kind of top-notch spa a Bond villain might join. 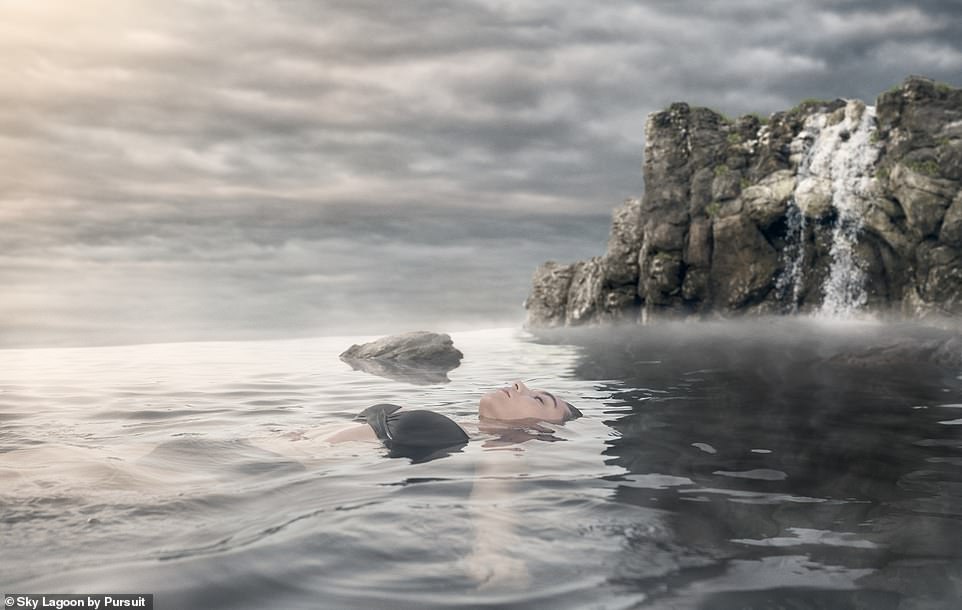 Neil says that ‘you’ll pass a lot of ugly warehouses’ on the approach to the lagoon, ‘but turn the final corner and everything changes’ 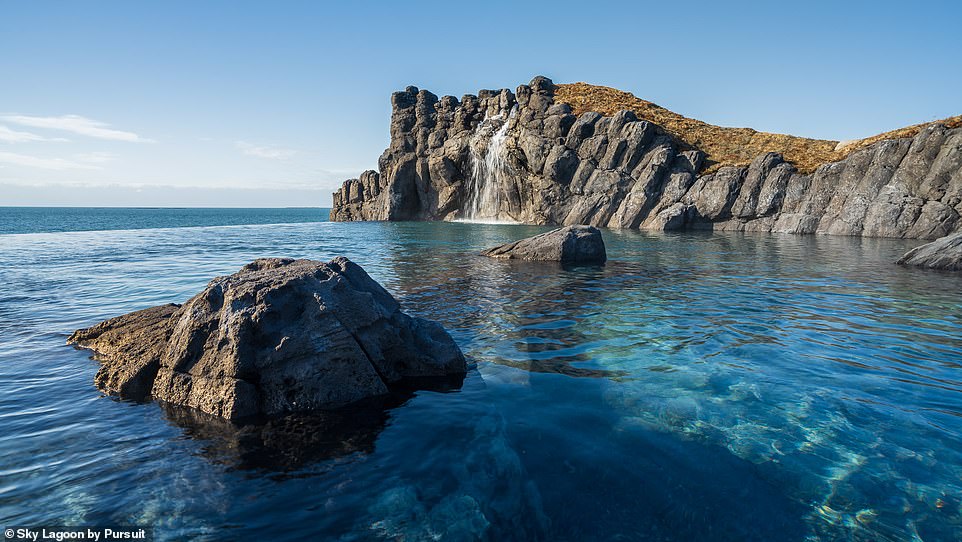 The lagoon is accessible to all ages, though the over-12s-only rule puts it off-limits for young families, says Neil 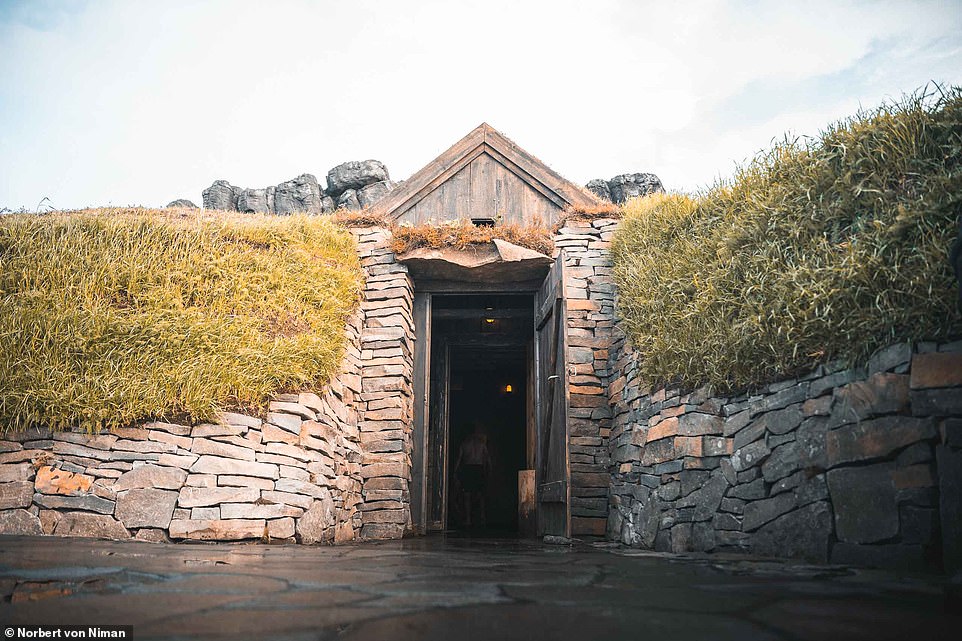 The walls of the reception area are ‘made of blackened timber and volcanic bricks’, according to Neil 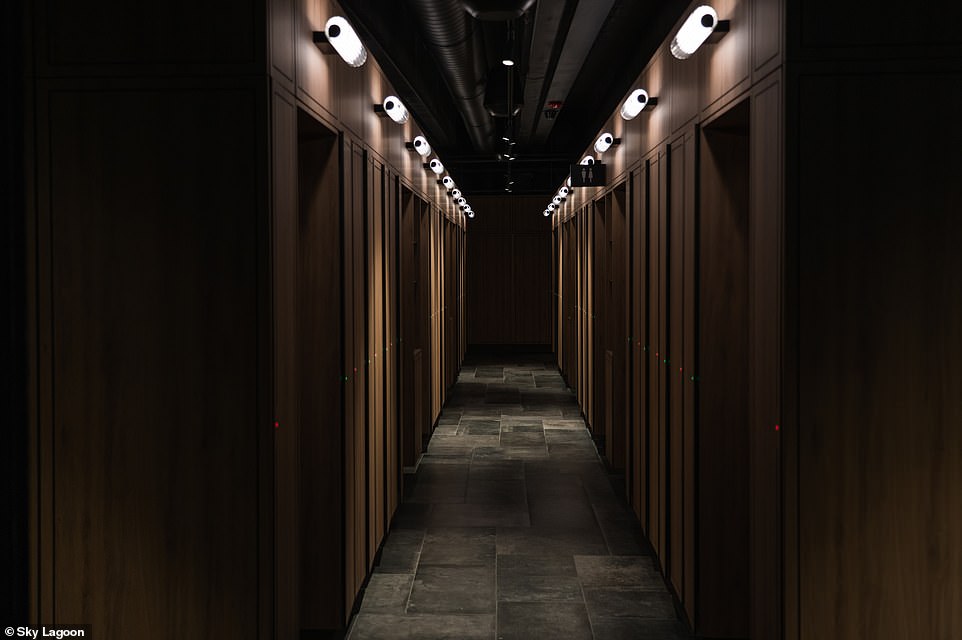 According to Neil, the underfloor heating in the Sky Lagoon locker rooms adds a touch of luxury 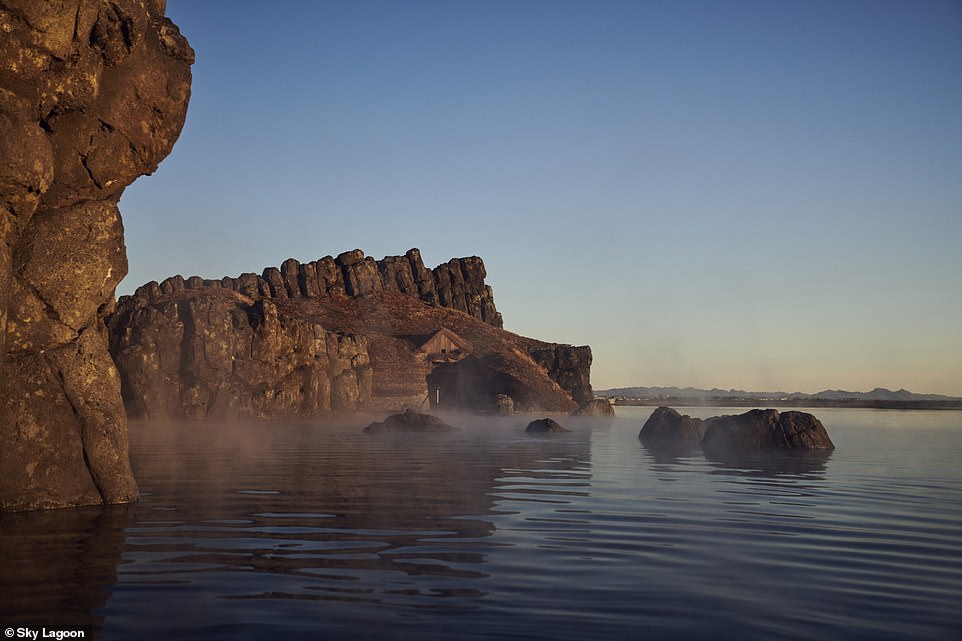 In the ‘enchanted cove’ of Sky Lagoon, ‘jagged black volcanic rocks rise up on all sides’ 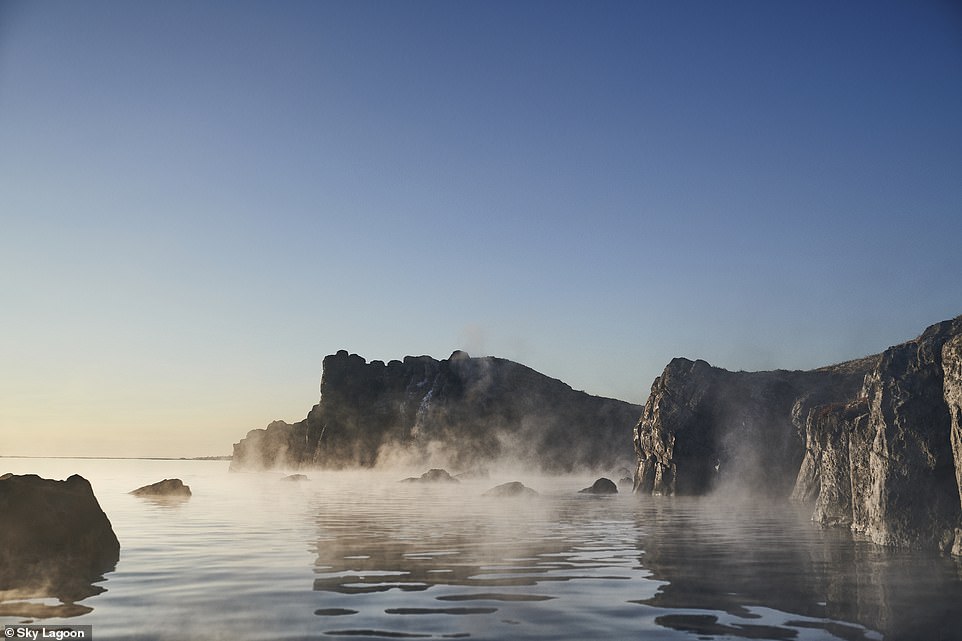 Underfloor heating in the locker rooms adds an early touch of luxury, but doubts remain as I leave the zen-like shower area – can Sky Lagoon really beat the old faithful Blue Lagoon?

The answer comes quickly. Walk through clouds of steam and step into its warm, silky waters. Glide forward, leaving the building behind and prepare for your jaw to drop.

You’ll find yourself lost in an enchanted cove. Jagged black volcanic rocks rise up on all sides.

Step or swim through waters that twist round a series of dark corners and you’ll soon hear the low buzz of voices. Head towards them for the next big reveal.

It’s here that Sky Lagoon’s main pool opens out. The waters stretch away on both sides, while in front is the lagoon’s 250ft-wide, infinity-style edge. Ahead of that is only the sea and sky. Stand at the wall and you’ll feel as if you’re suspended over the very edge of the Atlantic. 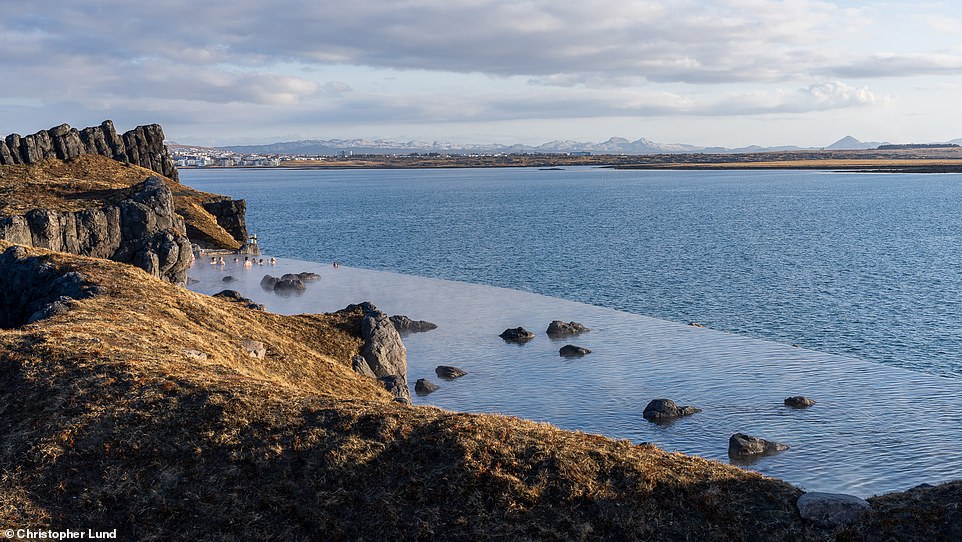 Describing the main pool, pictured, Neil writes: ‘Stand at the wall and you’ll feel as if you’re suspended over the very edge of the Atlantic’ 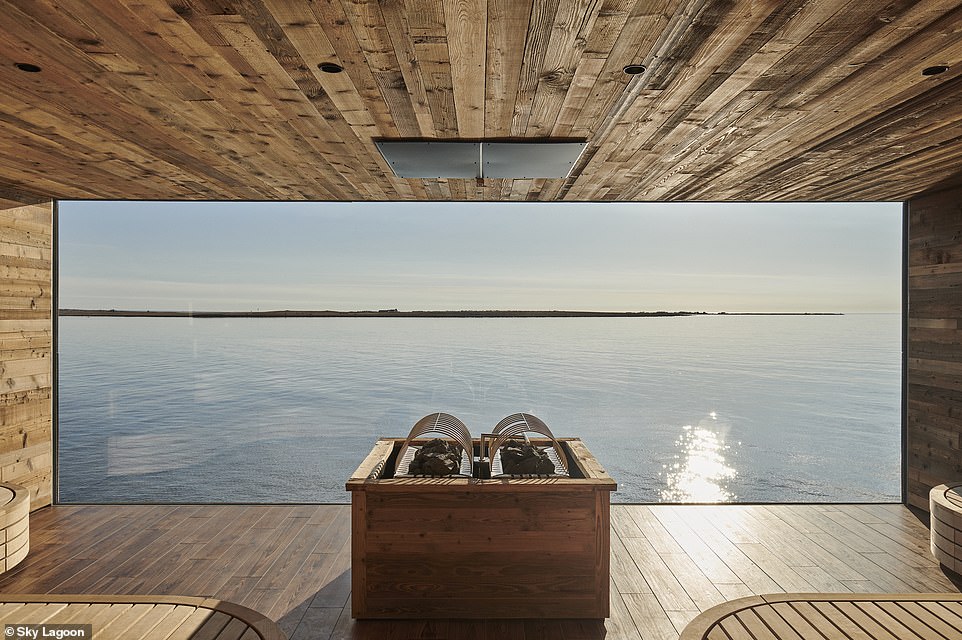 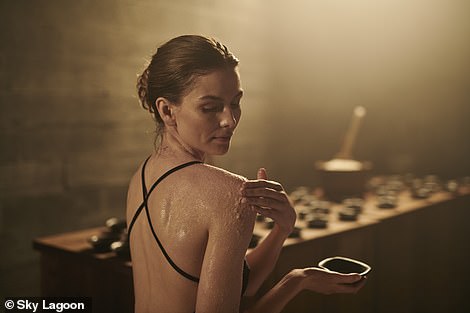 The wow-factor beats anything I felt at the bigger, land-locked Blue Lagoon. All around me here are faces as excited as mine. And through the steam I see something else: happy couples drinking champagne. For Sky Lagoon has one of the world’s most stylish swim-up bars. Tucked away in the entrance to a dark cave, you pay for drinks using the high-tech wristband that secures your locker and acts as your entry ticket.

Toasting a terrific holiday amid a new flurry of snow made Sky Lagoon feel even more magical. And I hadn’t even paid extra for the Sky Ritual ticket that includes a body rub, steam room and a glass-walled sauna looking straight out to sea.

Missing out on those was a mistake, a proud Icelandic grandmother told me later as I sat by the fire and layered up to leave the lobby. She proved the lagoon is accessible to all ages, though the over-12s-only rule puts it off-limits for young families. She also said that after taking the waters I’d have a fantastic night’s sleep – and she couldn’t have been more right. 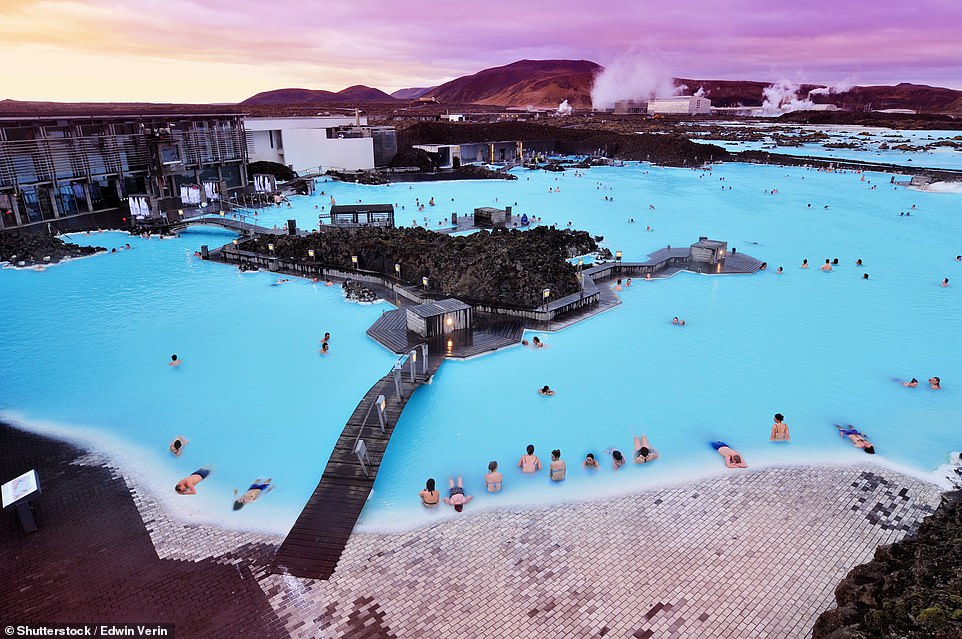 Comparing Sky Lagoon with the Blue Lagoon, pictured, Neil says: ‘The wow-factor beats anything I felt at the bigger, land-locked Blue Lagoon’ 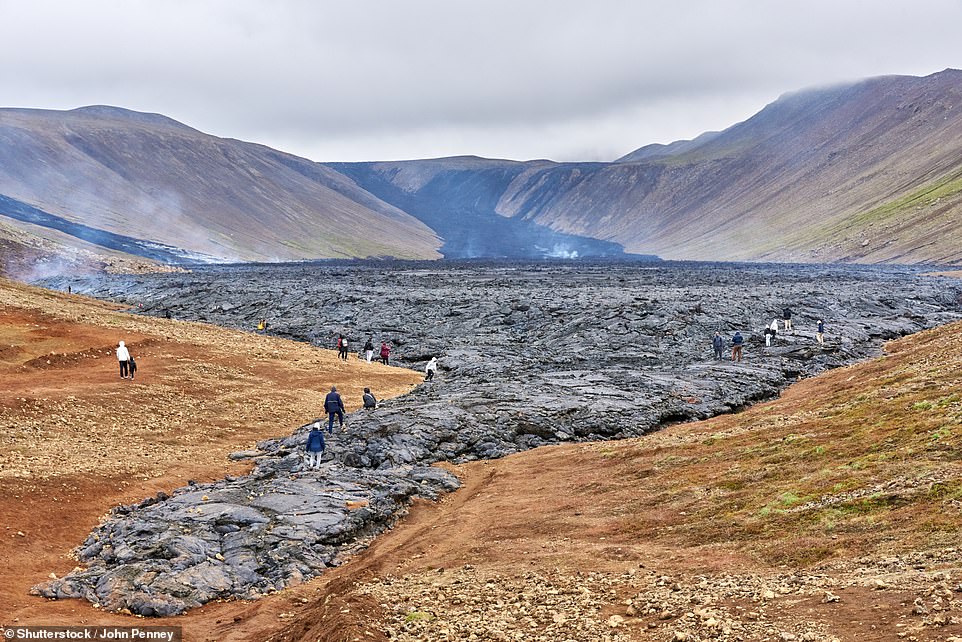 Entry to Sky Lagoon starts at £40 (skylagoon.com) and guided tours to the Fagradalsfjall volcano cost from £48 (re.is). British Airways, easyJet, Icelandair and Wizz have direct flights to Iceland from £120. Get more inspiration at visiticeland.com.

Head to Iceland soon and Sky Lagoon isn’t the only new attraction to try. Last spring the huge Fagradalsfjall volcano began to erupt for the first time in 800 years.

Hiking to the crater offers a rare chance to see (and smell) newly formed lava fields.

Tour groups and private guides are rushing to take advantage of the sight, knowing the volcano could become dormant again at any time.

Sign up for an hour-long drive towards the volcano, then walk some 90 minutes to the best viewpoints.

I wasn’t lucky enough to see fiery lava, although I did face horizontal sleet from the moment I left the coach.

Fortunately, I’d taken the hotel’s advice on boots, hats and warm, waterproof clothing. And the landscapes I hiked through, even when wet, were worth any discomfort.

Better still, the free-flowing geothermal waters that fill the Sky and Blue lagoons also help fill Iceland’s radiators and hot-water tanks, so you don’t need to feel guilty about turning up the heat at your hotel and taking a long, hot shower before diving under a thick duvet for the perfect night’s sleep.

Save valuable luggage space with this fast-drying beach towel

Woman bags seven-night holiday to Spain for just £4.94 and it includes return flights – here's how she did it | The Sun