Family-run hotels passed down the generations that critics still love

For the best of British hospitality, stay somewhere family-run: The brilliant hotels that have been passed down the generations – and are still getting rave reviews

For a truly warm and friendly welcome with wonderful hospitality throughout, there is nothing to match hotels that have been cherished by generations of the same family.

While such establishments are commonplace in Europe, there are fewer of them in Britain but they certainly make their mark. Ranging from those with just a handful of rooms to historic country houses, they provide the very best of British hospitality, year in, year out.

The Goring, next to Buckingham Palace, is the last privately owned luxury hotel in London. It was started by Otto Goring in 1910, swiftly becoming a favourite of royalty and heads of state, and is now run with the same level of care by Jeremy, his great-grandson (thegoring.com). 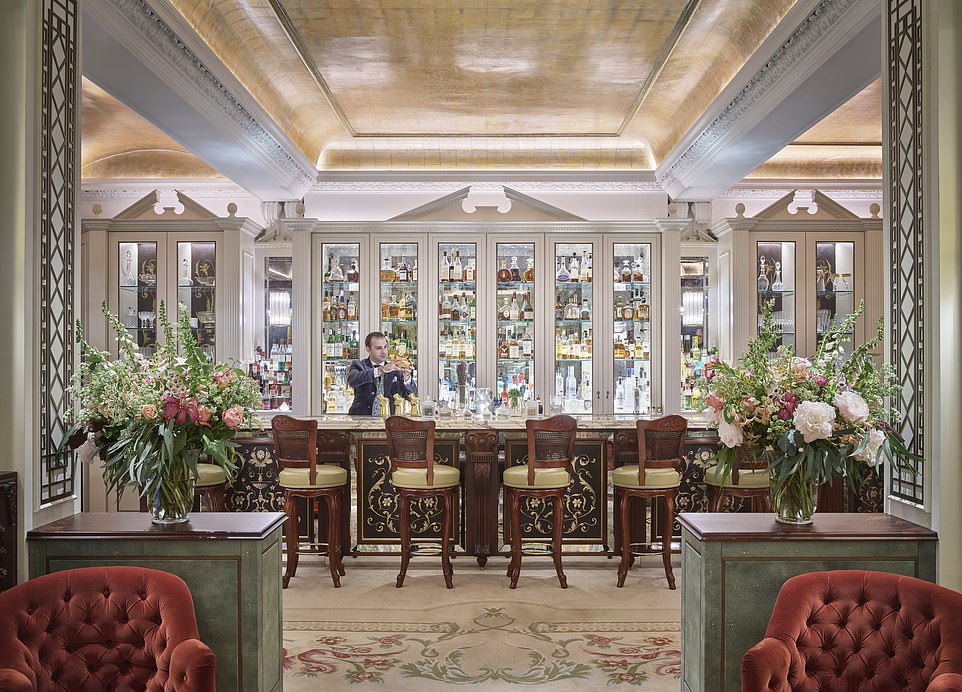 The Goring, next to Buckingham Palace, is the last privately owned luxury hotel in London. Pictured is the swanky bar 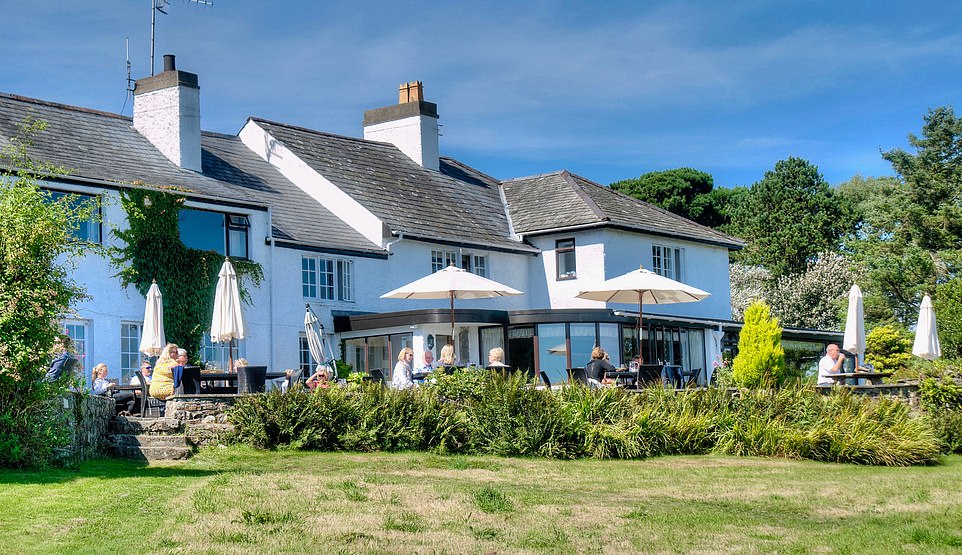 But delve into the history of Britain’s oldest family-run hotels and often there’s a matriarch with a vision to be found. Norah Fletcher-Brewer opened Porth Tocyn in 1948 and, with a focus on food from the very start, it has had an entry in the Good Food Guide since 1957 – a record few other hotels can match.

‘She had a hunch that holidays in Wales would take off when the war ended,’ says Nick Fletcher-Brewer, her grandson.

Norah certainly knew how to pick a location. On the Llyn Peninsula in North Wales, the white-washed hotel has a staggering view over Abersoch and the coast. From just five bedrooms in 1948, there are now 17 plus a cottage and a new shepherd’s hut. There’s also an outdoor swimming pool.

And despite the foodie heritage – the restaurant still gets rave reviews – it’s very family-friendly. Children can share rooms with their parents for no charge, and there’s a fridge and microwave for parents’ use as well as a games room. High tea and supper are available for younger children. Not surprisingly, about 80 per cent of guest are repeat customers. 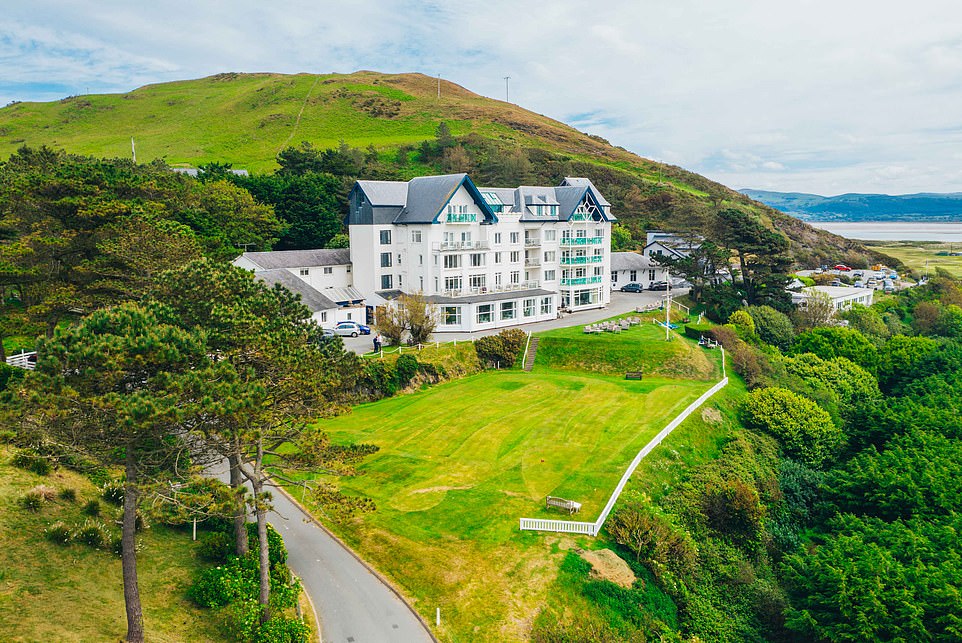 At Aberdovey, within the Snowdonia National Park, the Tredeffian has been owned by the wonderfully named Cave-Browne-Cave family since it opened in 1907 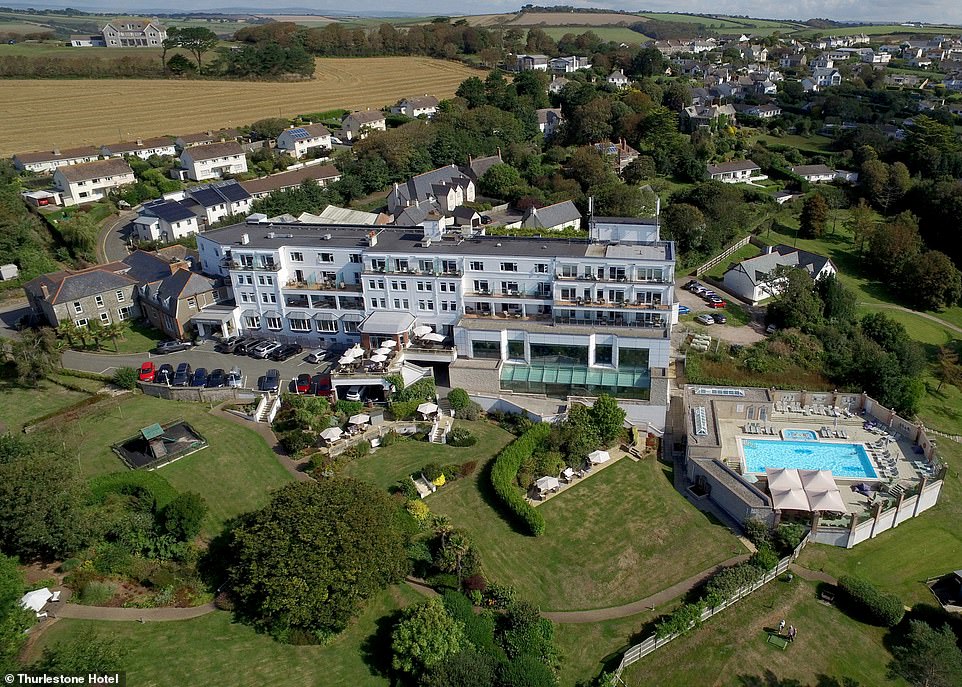 Nick’s son Henry is the newest generation at Porth Tocyn. He started in the kitchens, washing up when he was 14, and three years ago, now married with a young son of his own, he returned to help his father run it.

‘The generation of kids that came every year when I was young are now coming back with their children, and that’s amazing and wonderful to me,’ Henry says. Double rooms start at £168 a night including breakfast (porthtocynhotel.co.uk).

At Aberdovey, within the Snowdonia National Park, the Tredeffian has been owned by the wonderfully named Cave-Browne-Cave family since it opened in 1907. Current managing director Caroline has overseen the addition of an indoor swimming pool plus two self-catering cottages with views on to Cardigan Bay. Doubles start at £220 a night, including breakfast (trefwales.com).

In 1896, farmer’s wife Margaret Amelia Grose realised that people coming to play on the newly created Thurlestone golf course in South Devon might like somewhere to stay, and started offering B&B from her 17th Century farmhouse.

The original building has changed a good deal, although you can still see parts of the farmhouse in the lobby. There are now 65 bedrooms, tennis courts, indoor and outdoor swimming pools and a spa. Double rooms from £240 a night including breakfast (thurlestone.co.uk).

However, it’s in neighbouring Cornwall where you’ll find Britain’s most extraordinary hotel family. In 1926, Olive Whittington opened Edgcumbe Hotel in Newquay with her daughter Bettye. Today, her descendants are in charge of some of Cornwall’s best-loved hotels, all of them award-winning.

Bettye in particular remains a legend in hotel circles, working until her 90s (she died aged 94 in 2011) and inspiring her children and grandchildren to expand the business with their own establishments, which include Watergate Bay Hotel. 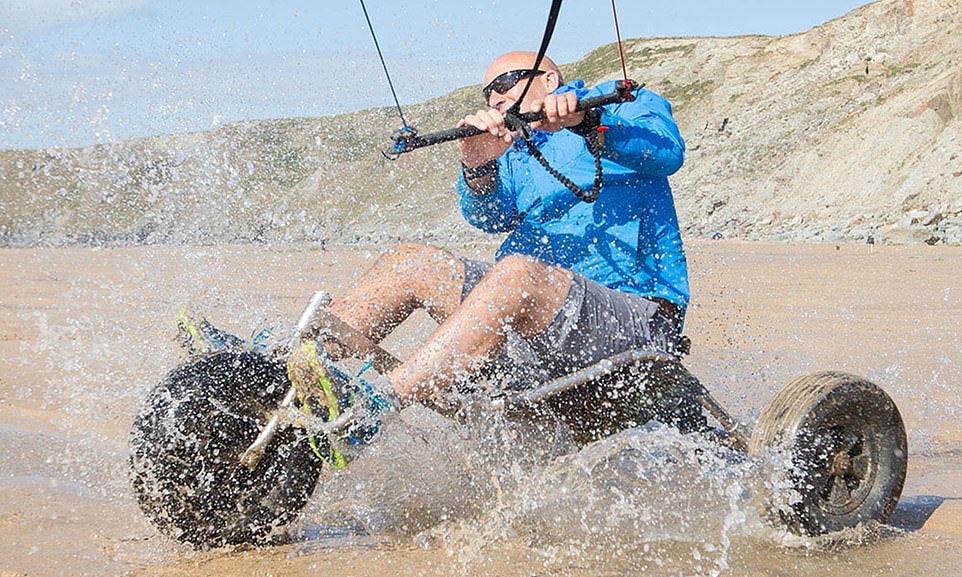 One of the extreme sports offered at Watergate Bay in Cornwall 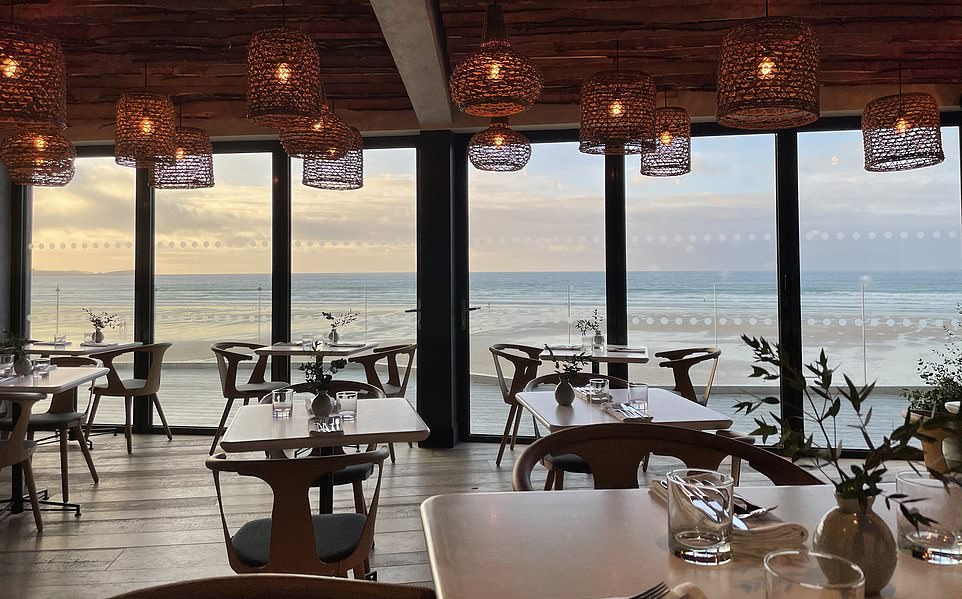 Watergate Bay was originally built in 1900 for a railway line that never appeared, and today it’s a powerhouse hotel with 78 bedrooms, five restaurants and bars. Pictured is the Emily Scott Food restaurant

‘Bettye was amazing,’ says Will Ashworth, her grandson who now owns the hotel. ‘She didn’t care for spreadsheets but was instinctively brilliant at creating hotels that resonated with people.’

Watergate Bay was originally built in 1900 for a railway line that never appeared, then used by the Ministry of Defence for married quarters before Will’s parents John and Mary Ashworth took it over in 1968.

Today it’s a powerhouse hotel with 78 bedrooms, five restaurants and bars and an extreme sports academy on the beach, the brainchild of Will’s brother Henry. In 2017 Will and his family opened Another Place in the Lake District and last year bought Amport House in Hampshire – also from the Ministry of Defence – which aims to open in 2022.

Will adds: ‘I’ve spent 20 years repositioning Watergate Bay for the contemporary lifestyle market, but the fundamentals we learned as children – the meaning of hospitality – have stayed the same.’ Double rooms at Watergate Bay start at £225 a night including breakfast (watergatebay.co.uk).

A two-hour walk along the coastal path from Watergate Bay and you reach Bedruthan and The Scarlet hotels, which blend luxury with a strong sustainability-based ethos. The sisters who own them, Debbie Wakefield, Emma Stratton and Rebecca Whittington, are cousins of the Ashworths.

At The Scarlet (scarlethotel.co.uk) there’s a natural outdoor swimming pool, wood-fired hot tubs and an Ayurvedic-based spa, while Bedruthan (bedruthan.com), which has a thermal spa, has been family-centred for more than 70 years. 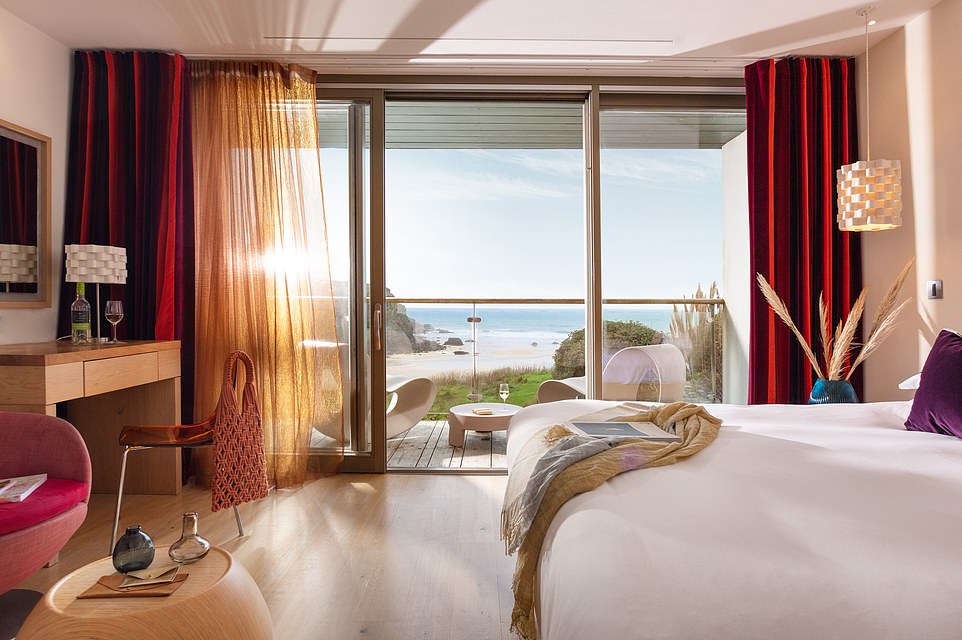 On the beach: The spectacular sea view from a modern room at The Scarlet 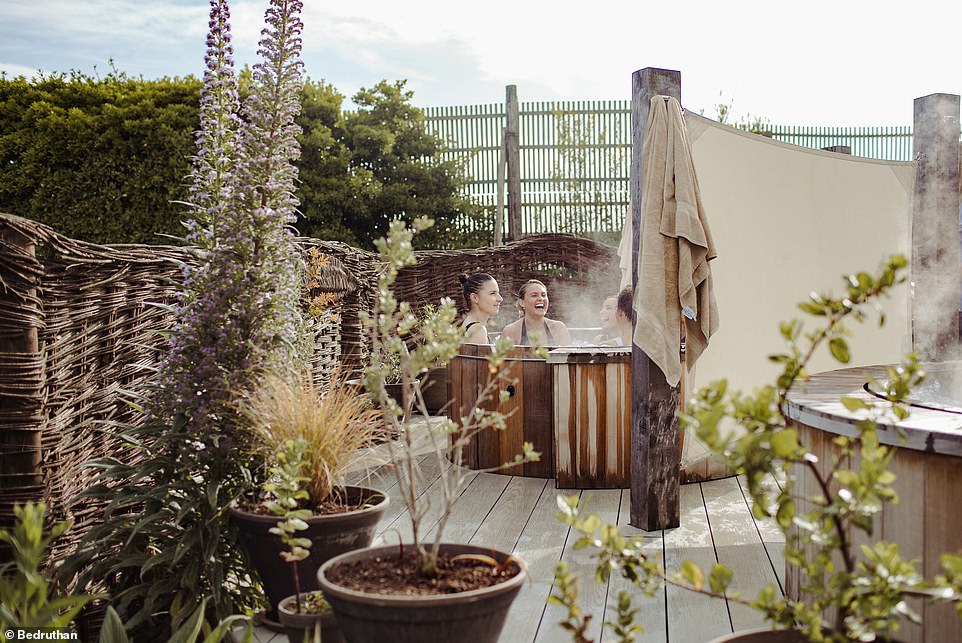 Bedruthan, which has a thermal spa, has been family-centred for more than 70 years

Generations game: The Nare hotel on Carne Beach in Cornwall

On Carne Beach, Will’s brother Toby owns The Nare, which Bettye bought in her 70s as a retirement project. It revels in tradition – staff will happily unpack your suitcases – and has many long-serving employees, including Ken Cracknell who has run the cocktail bar for some 40 years. B&B in a sea-view double costs £698 (narehotel.co.uk).

At Kinloch Lodge in Skye – originally a farmhouse that has been in her family since the 17th Century – Isabella Macdonald says: ‘I want people to feel at home but let us look after them.’

Her parents converted the place into a hotel in 1972 and it quickly won awards. Her mother, food writer Claire Macdonald, would usually be in the kitchen when guests arrived and, if her father Godfrey – also known as Lord Macdonald and High Chief of Clan Donald – was busy, Isabella and her siblings would show guests to their rooms.

Isabella’s sons now help out at weekends and during school holidays. She says: ‘I’ve told them I don’t mind if one of them wants to carry on with the hotel, but they’ve got to go away and do something else first.’

Now with 18 bedrooms, a kitchen garden was added during lockdown last year. Isabella says: ‘Our seafood – langoustines and mussels – have always come from our amazing suppliers on Skye, but in the early days my mother used to get excited by tins of tomatoes or frozen spinach; now it’s much easier. We’ve got spinach, two types of beetroot, carrots, a fruit cage and rhubarb, among other things. We’re also experimenting with oyster trestles this year.’ 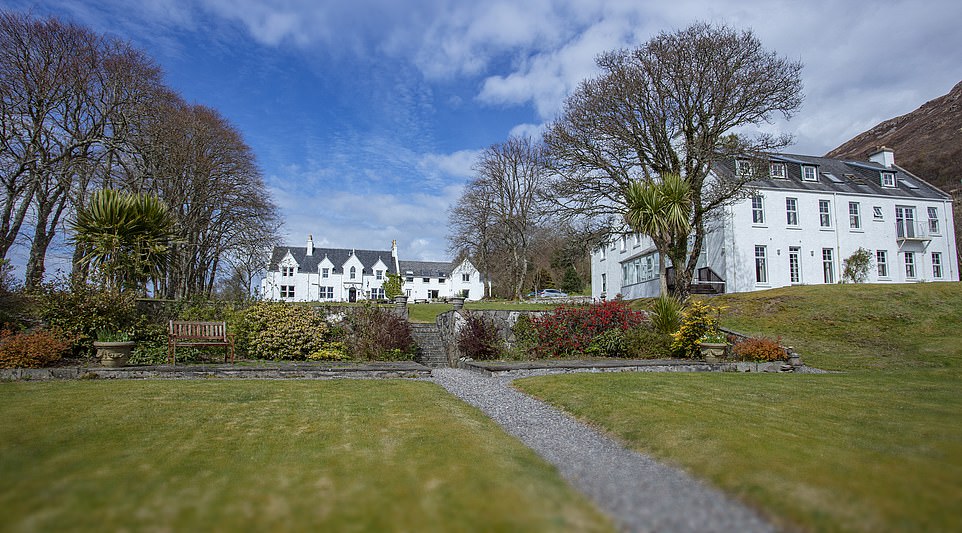 Kinloch Lodge in Skye, originally a farmhouse, has been in Isabella Macdonald’s family since the 17th Century 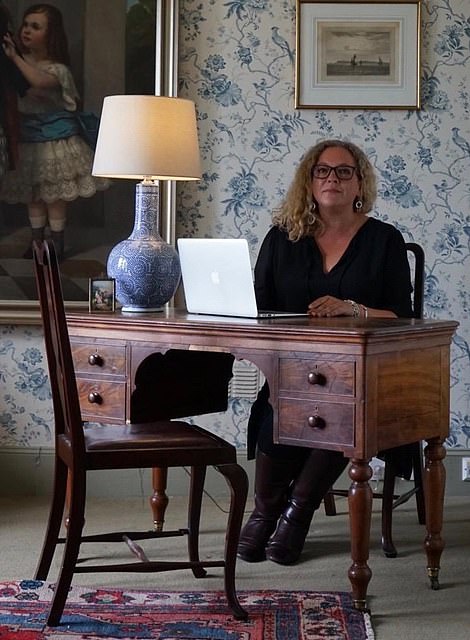 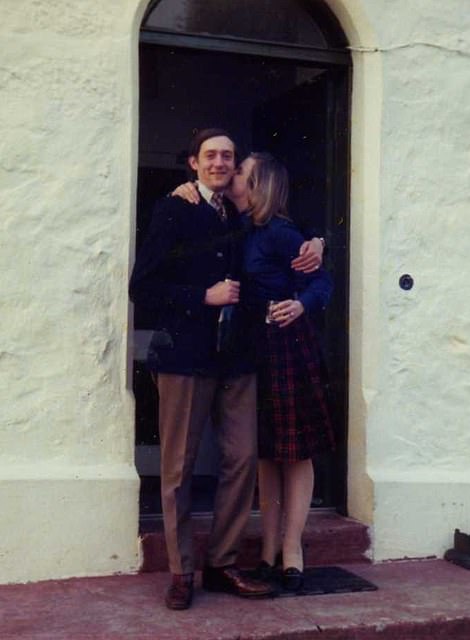 Isabella, pictured left, now runs Kinloch Lodge with the help of her sons. Her parents, Claire and Godfrey, seen right, converted the property into a hotel in 1972 and it quickly won awards 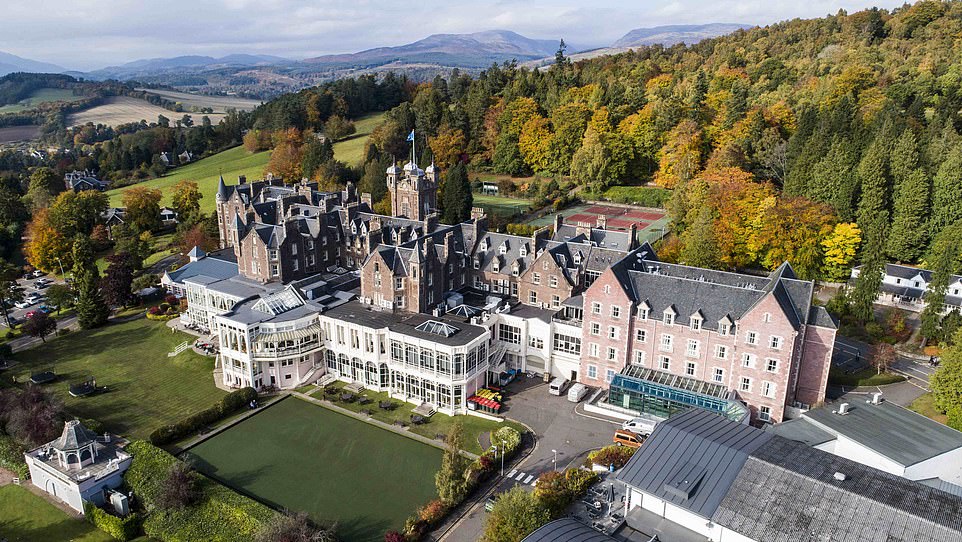 Crieff Hydro in Perthshire, which was started by Scottish doctor Thomas Meikle in 1868 as a hydropathic spa and temperance hotel, is set in 900 acres 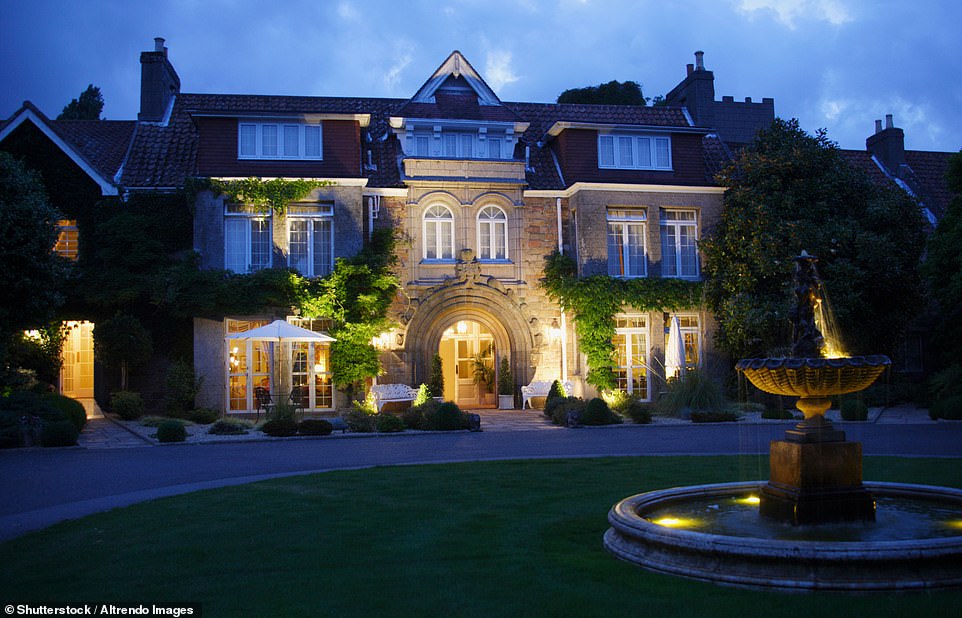 Edith Lewis fell in love with derelict Longueville Manor when she visited Jersey after the war. In 1949, she opened it as a hotel with her husband, Sidney. It had 12 bedrooms and one bathroom – today it has 30, all en suite

In Perthshire, Crieff Hydro was started by Scottish doctor Thomas Meikle in 1868 as a hydropathic spa and temperance hotel.

Now, more than 150 years later, the hotel, set in 900 acres, is run by Stephen Leckie, the founder’s great-great-great-grand-nephew, and features several bars – including one named after Meikle. Doubles from £139 a night including breakfast (crieffhydro.com).

Edith Lewis, a pub landlady from the Midlands, fell in love with derelict Longueville Manor when she visited Jersey after the war. In 1949, she opened it as a hotel with her husband Sidney. It had 12 bedrooms and one bathroom – today it has 30, all en suite.

Edith’s grandson Malcolm is now in charge. He says: ‘My sisters and I had a brilliant childhood. The hotel was our playground but we were also roped in to help, making beds, carrying bags and helping in the kitchen.

‘During lockdown, my daughter, having sworn that she’d never work in a hotel, deferred her place at university and worked here when it was open. She’s now decided to study hospitality. Our 16-year-old son has the hotel bug, too.

‘This has been a challenging year, but one of the beauties of a family business is that in difficult times you all dig in together.’ Double rooms from £225 a night, (longuevillemanor.com).