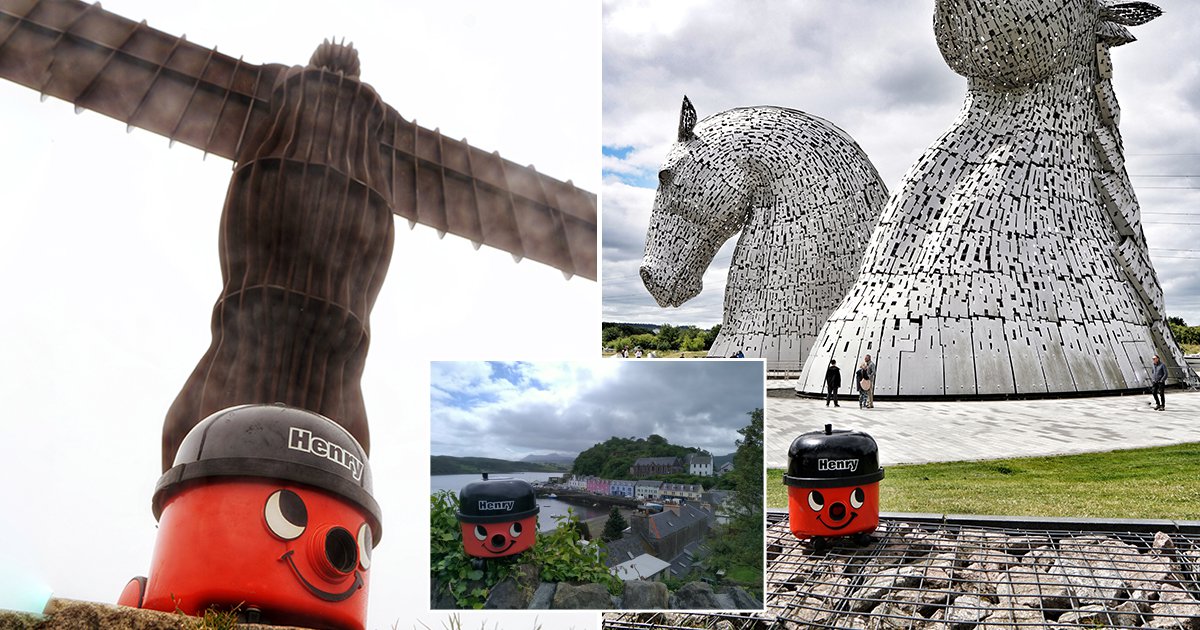 Thought you were well travelled? Well, you might have been beaten by a vacuum cleaner.

Meet Henry, the hoover who has adventured across the UK with his proud owner, Andrew,

The iconic vacuum, which was first launched in the 1980s, has even completed all 214 of the UK’s highest peaks.

Henry has been exploring the nation since 2018 and since then has ventured from Scotland to Cornwall.

Here, Henry himself (yep, not only does he travel, he speaks too) tell us how he became probably the world’s only travelling vacuum cleaner.

Talking hoover, Henry, said: ‘It was when we were working in a holiday house in Cornwall that some visitors suggested I take a trip out with them to see the town’s top tourist attraction, the Bude Tunnel.’

The Bude Tunnel – which is actually a Perspex tunnel that takes Sainsbury’s shoppers from it’s carpark to store entrance – was so life-changing for Henry that he ‘suddenly had a taste for travel and adventure’.

There was no going back for the plucky vacuum, who has been travelling the UK ever since, with Andrew and his Border Collie.

Henry said: ‘I’ve seen lochs, lakes, meres, waterfalls and the sea, travelled to England, Scotland and Wales, been up mountains and down valleys, but somehow, I feel I have only scratched the surface.

‘Many places I’ve been to require a bit of a hike, but others can be fully appreciated without much exertion.’

While most vacuum cleaners call a new carpet an adventure, Henry has visited Chatsworth House in Derbyshire and taken in the art at the Yorkshire Sculpture Park.

He’s ventured up the A1 to the Angel of the North and even further to the DunBear in West Lothian, Scotland. He’s also enjoyed the sites of Durham Cathedral.

And down South, he’s visited the Eden Project in Cornwall.

Having spent most of his life in a cupboard, Henry is said to be amazed by the places he’s been able to go and has made it to some unexpected locations.

He said: ‘My most memorable morning was taking in a sunrise on the top of Yr Wyddfa (Snowdon), though that was very recently rivalled with an incredible cloud inversion in the Peak District which really took my suction away!’

He has also spent time in the Ethels, a list of 95 hills in and around the Peak District, which are all 400m above sea level.

Henry added: ‘It’s good to have a project going on like the Ethels, it helps keep the motivation to get out there.

‘I do have to be careful though as, on a windy day, I can get blown off them!’

Henry is aiming to explore the UK even more while trying to make the world a better place along the way.

Henry – who is definitely not really Andrew – said: ‘This country has some fantastic places and so much of it is free for us all to enjoy.

‘It is very precious though and I’ve met some top people who like to help keep it that way.

‘These people are out there organising litter picks or grabbing bags full of rubbish that has been carelessly left behind.’

Henry is recording the rest of his adventures with Andrew, who shares their photos on Instagram (@henryhooverontour) with their 108,000 followers.

In a recent post, they shared a snap of Henry looking at the sunset from an Alphin Pike, gaining over 4,900 likes.

While another said: ‘Beautiful view and sunset Henry worth it after your tough little hike.’

‘I am in awe of you Henry, the way you achieve such great heights on those little wheels your such an inspiration,’ said another.