Rum and reggaeton: What's it's like to visit tropical Puerto Rico in January 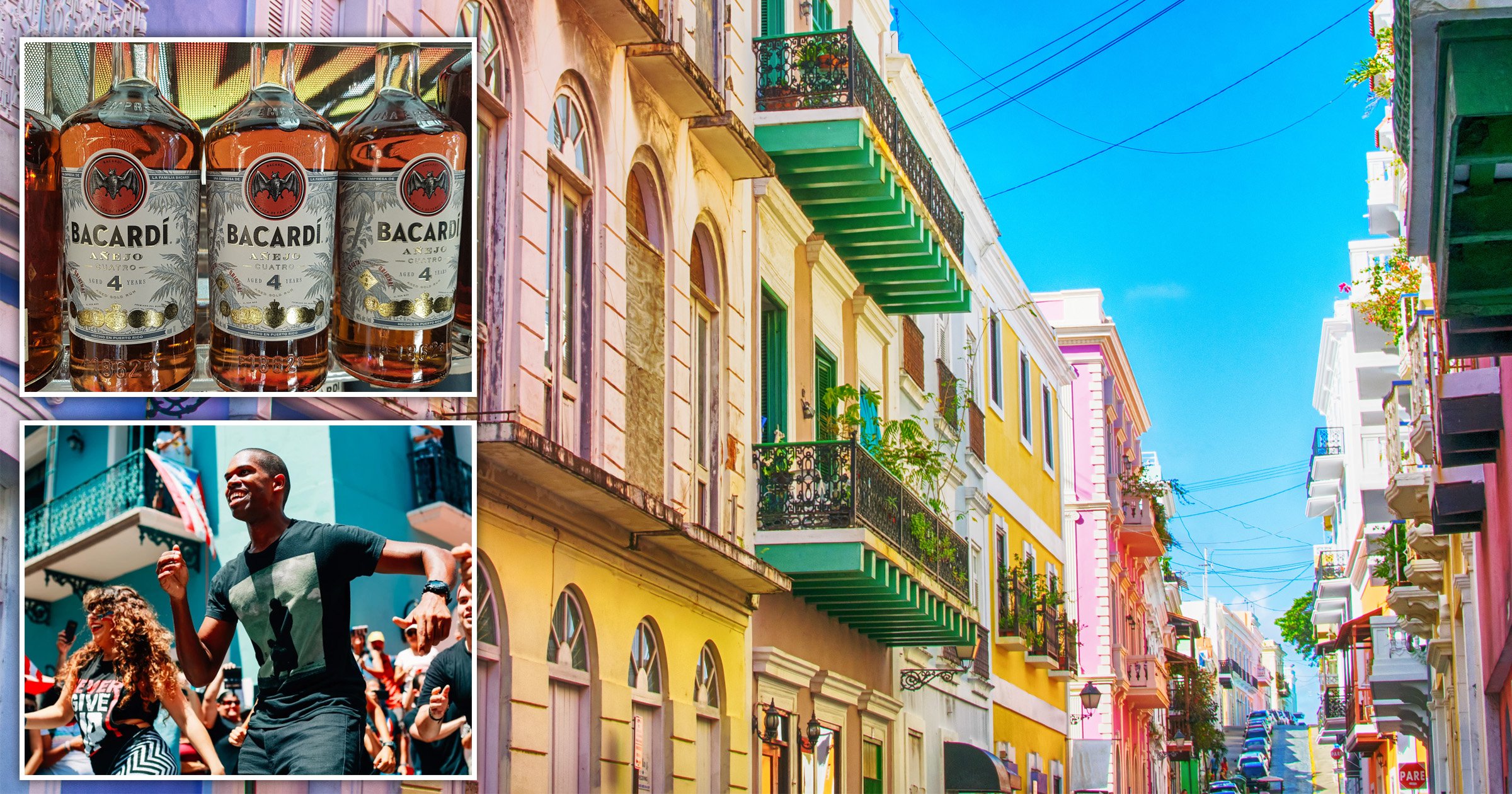 This is one helluva way to spend a wet January.

I’m in a see-through kayak that’s illuminated with LEDs, my face plastered in fluorescent glow paint, paddling around a lagoon in balmy, night-time San Juan.

Around me the skyline of Puerto Rico’s capital is twinkling, while below the clear bottom of my boat, shy, weird-looking manatees (sea cows) lumber through the water.

Night-kayaking on the Condado is the lovely, quiet calm before the storm – the following days will be all sun, grooves and booze.

If Death In Paradise has made you itch for the Caribbean, then this tropical paradise is the perfect antidote to deathly dull January.

Of course, Puerto Rico is not Guadeloupe but it sits not a million miles away at the head of that string of Caribbean islands where you’ll also find the Virgin Islands, Monserrat and the home of DI Parker and co.

It’s two and a half hours by plane from Miami and as you’d probably expect, it’s hot, colourful and obsessed with music and dancing.

But first, and most importantly, there’s the rum!

And there’s no better place for it than at distillery Casa Bacardi, one of the country’s most famous destinations.

‘Puerto Rico is the happiest island in the world!’ enthuses Cristal, the energetic young woman guiding me around. They produce a thirst-quenching 135,000 litres of alcohol every 24 hours and by the time we get to the cocktail-making and sampling stage, I’m very much on board.

We start with a classic Cuba Libre – Bacardi rum, Coca-Cola and squeezed lime – which heralds the distillery’s origins.

Founded in Cuba in 1862 (the bat symbol was incorporated after fruit bats were discovered hanging in its rafters), in 1930 their biggest ever site was established here on the outskirts of the little town of Catano, just 20 minutes from San Juan.

Three rum-based drinks later and I’m ecstatic about being here too.

I need a loosener because in Puerto Rico, music and dance are everywhere you go. Strolling around the cobbled streets of the old town of San Juan – a Unesco heritage site that has just celebrated the 500th anniversary of its founding by the Spanish – I hear melodies drift out from behind hot-pink, lime-green and pumpkin-coloured walls, while, in cafés and restaurants, servers move to the beat of salsa tunes between taking orders.

Latin beats are to be expected. This, after all, is the nation that spawned superstar Ricky Martin, who had us Livin’ La Vida Loca, but I keep an ear out for the country’s slave heritage too.

Descendants from several African countries brought their own rhythmic, pulsating dance forms and their legacy is rapper Daddy Yankee, the king of reggaeton.

Dancing to reggaeton requires more flexibility and flirt than I can muster but still, there’s plenty of fun to be had people-watching. In the lively La Placita neighbourhood, scantily clad chicas and men with muscles bulging through their T-shirts throng outside bars and nightclubs in the evening, the streets alive with noise.

Another afternoon, I wander around the shanty town of La Perla, which sits just outside Old San Juan’s walls, and is where the video for Luis Fonsi’s 2017 smash earworm, Despacito, was filmed. Here, I take some time to soak up the island’s rich history.

Puerto Rico means ‘rich port’ and in the days when it traded the gold that the Spanish discovered here, San Juan was the jewel in its crown.

Which means elaborate historic architecture is everywhere, from the old San Cristobal fort overlooking the Atlantic – used to defend the island from attacks from pirates, the French and the British – to the old Puerta de San Juan (the bright red former entrance gate to the city), and impressive churches such as the chalk white Iglesia de San Jose.

Due south in Ponce, its second city, there’s plenty more to keep visitors transfixed (and cured of hangovers).

Named after Spanish explorer Ponce de León, who founded the first settlement here, Ponce was another major port that was used to export incredible coffee.

The coffee here is so good it’s knocked back by Spanish royalty and the inhabitants of the Vatican, so suitably wired on it, I walk around the town, admiring buildings including an art deco cinema and, oddly, the local fire station.

Dating from 1882, it’s become the most photographed structure in the city thanks to its unusual black-and-red-striped exterior and Moorish design.

I end my trip back on the water and surrounded by lights on the very south-west tip of the island.

Near where I’m staying on Combate Beach (rooms from £98pn) is a special stretch of water. La Parguera is one of Puerto Rico’s three bioluminescent bays and the only one you can get to with a motor boat.

I hop aboard one steered by friendly Captain Cachi from Paradise Scuba (bio bay tour, £40pp) and he explains that bioluminescence is caused by microscopic organisms that glow when stimulated by movement.

I jump into the inky water and the second I start swimming it’s like moving through sparkling, liquid diamonds. January has never made me feel so jubilant.

Inspired to visit Puerto Rico? Add these to your holiday to-do list:

Take a trip to a hacienda to see how and where coffee is produced.

Try Hacienda de Cafe Pomarrosa, where owner Kurt will talk you through how they pick, prepare and roast their coffee beans.

You’ll get to meet his pooch, Macchiato.

Immerse yourself in Puerto Rico’s cuisine with a walking tour of Old San Juan, which will introduce you to many of the island’s dishes, including mofongo – mashed plantain with meat or seafood and cream cheese pastries.

El Yunque is the only tropical rainforest in the US and is home to hundreds of unique plant and animal species.

Here you can hike one of its many trails, bathe in natural pools underneath waterfalls or simply take in the beautiful scenery.

The lighthouse of Los Morrillos sits on an isolated peninsula on top of jagged cliffs that overlook salt marshes and lagoons.

It’s great for views to the sea, and close by are the highly Instagrammable pastel-pink waters of the saline lakes at Cabo Rojo.

Always check entry requirements to your destination at gov.uk/foreign-travel-advice