The new hotel in Newcastle that has sensational riverside views

Back in 1995, a Texan tourism report declared that Newcastle was the eighth-best party city – on the planet.

After a recent stay with a chum at the brand-new Innside Newcastle hotel on the historic Quayside, I can confirm that this mighty north-eastern citadel has lost none of its joie de vivre.

The evidence? For starters, during our dinner in the hotel’s swanky Gino D’Acampo Quayside restaurant, some of the guests treated the venue as a disco, twirling around to their heart’s content to party-tune remixes pumping through the speakers courtesy of a DJ in the bar area. 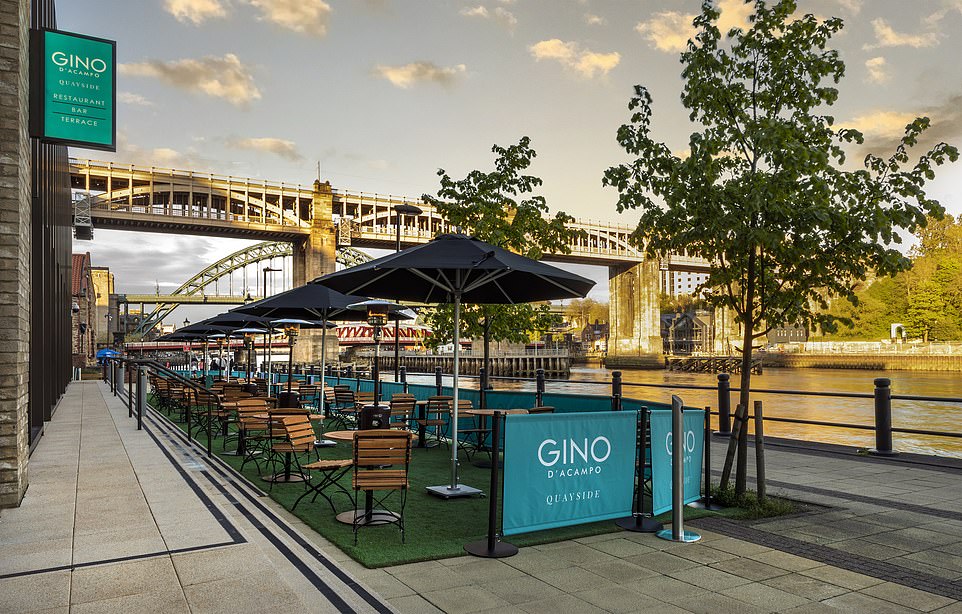 Innside Newcastle is a brand new hotel on Newcastle’s historic Quayside, with the restaurant offering by Gino D’Acampo 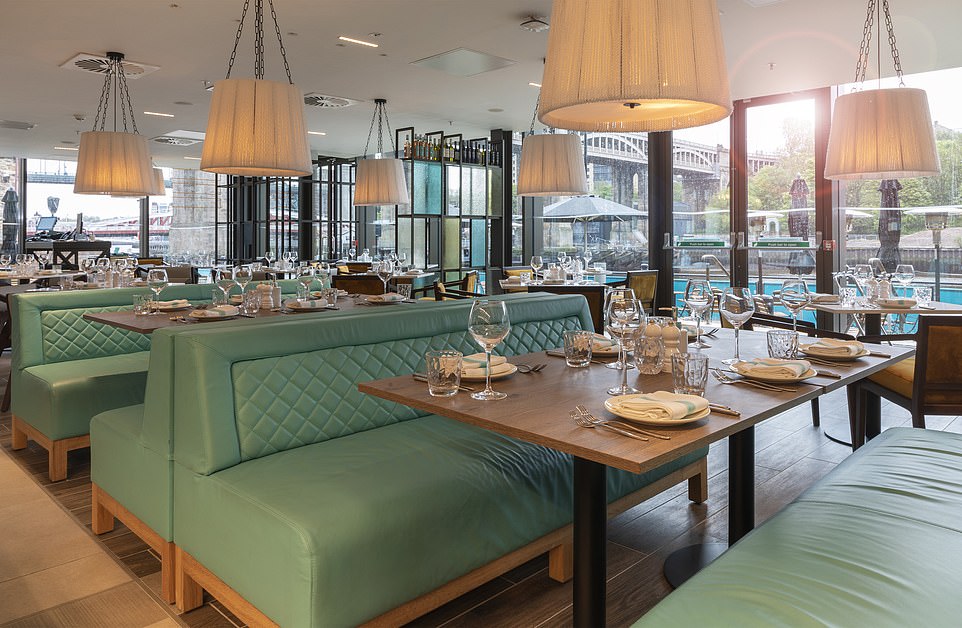 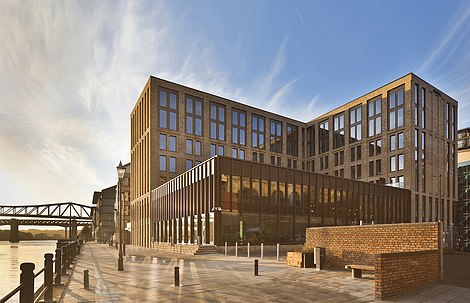 We had to lean towards each other to hear what was being said, the noise levels boosted by spontaneous whoops of delight from spectating diners.

I’m curious as to how posh a restaurant must be for Newcastle denizens to refrain from dancing. I’d wager that any establishment below two-Michelin-star level and it would be a case of ‘hold the amuse bouche, crank up the rumbustious fuzz pedal, we’ve got shapes to throw’.

By contrast, we were petering out fast, having earlier been on an epic 77-mile (123km) Hadrian’s-wall-themed bike ride into Northumberland National Park, with local cycling enthusiast and history expert Carlton Reid as our tour guide.

Carlton showed us how the Unesco-listed Wall and associated archaeological Roman treasures could be seen amid Newcastle’s modern-day housings estates, roads – and even at a petrol station.

On the way out to the breathtaking vistas west of the city, we diverted off the A186 to look at the remains of Benwell Roman Temple, built around AD 178–80 to honour the British deity Antenociticus.

Today it sits on Broomridge Avenue, among red-bricked bungalows and semis.

Next, we wheeled two roads over to Denhill Park, a residential area built around another remarkable Roman structure – Benwell Vallum Crossing (AD 130). The vallum was a defensive ditch that the Romans built to the south of the Wall. In Denhill Park lie the remains of a gateway and one of the stone causeways that led through it and over the vallum to Benwell fort, which bisected the Wall. 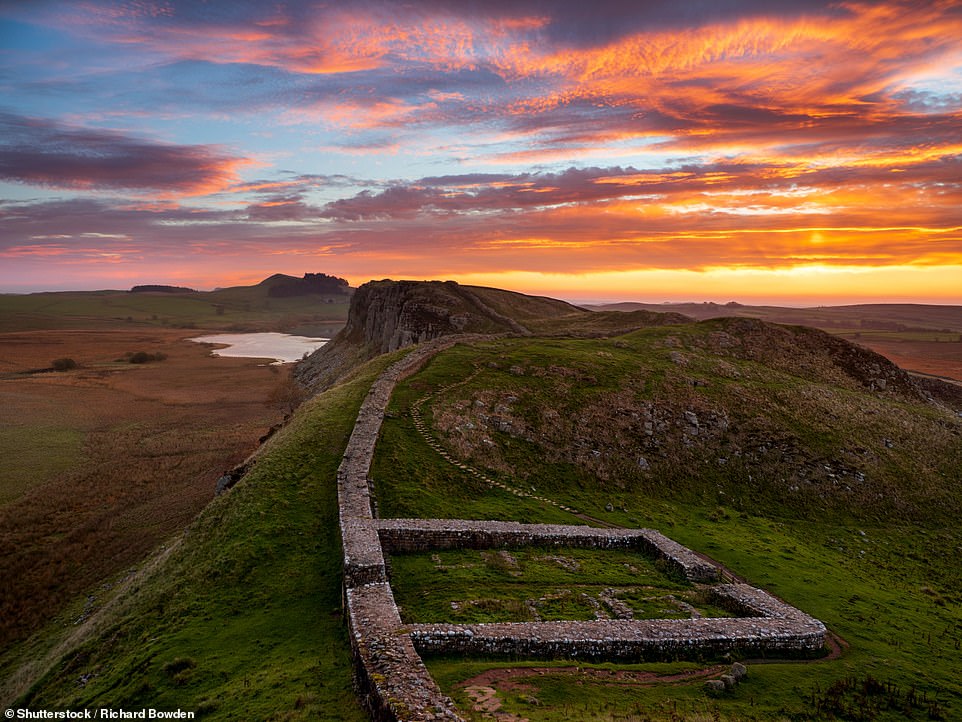 Ted, Colin and Carlton cycled parallel to Hadrian’s Wall and this small fort – Milecastle 39 – on the B6318 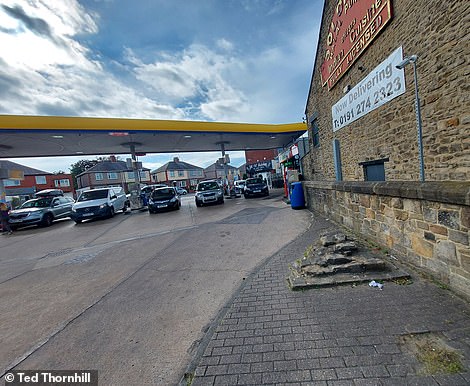 Further west, Carlton alerted us to a small section of the actual Wall jutting out of a Jet petrol station forecourt by the A186 and we lingered at Denton Hall Turret, an impressive, ruined fortification alongside a 65m (213ft) length of the Wall, right next to the A69.

It wasn’t long before we left the city limits behind.

The historical highlights of our pedal-powered perusal of the countryside included the Temple of Mithras, built in AD 200 and now a ruin off the B6318 (careful if you ride to this, I wheelspinned in some sheep droppings and, as I was clipped in, fell over sideways), and a hidden dell strewn with huge stones that Roman soldiers carved up and used to build the Wall a short distance away.

Markings made by the soldiers can still be seen.

After six hours or so of riding, we trundled along a riverside path, under the strapping King Edward VII railway bridge, right up to the outer edge of Gino D’Acampo’s al fresco seating.

We’d had a feast for the eyes as well as the mind, cycling under bruised skies along mesmerising rolling Roman roads through a landscape that took the breath away almost as much as some of the climbs. We rode past Sycamore Gap – you’ll know it from Robin Hood: Prince of Thieves – glided along deserted twisting lanes and cruised through idyllic villages. 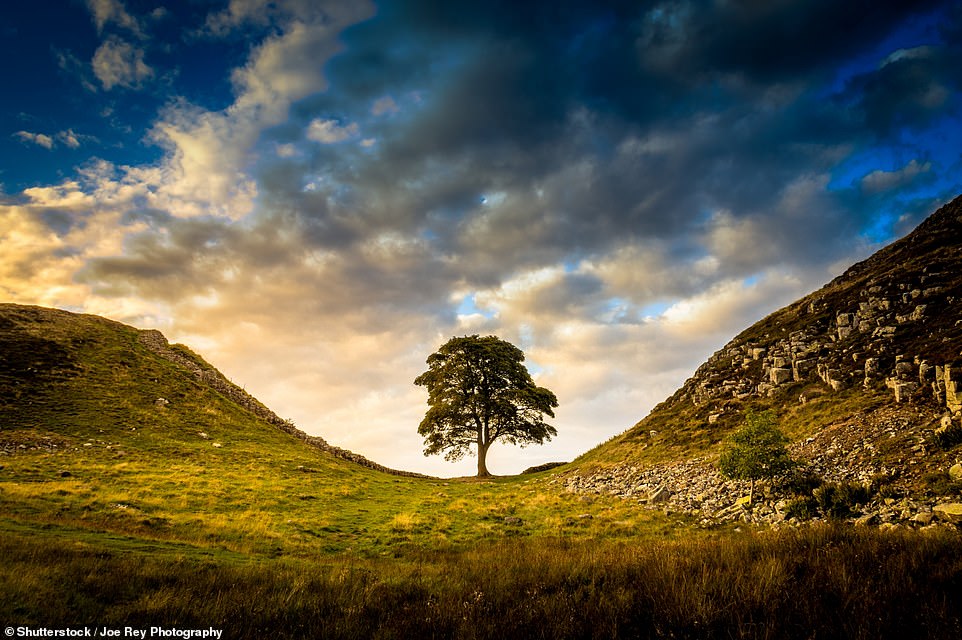 Sycamore Gap – you’ll know it from Robin Hood: Prince of Thieves. The lone tree can be found near the Wall’s Milecastle 39 fort 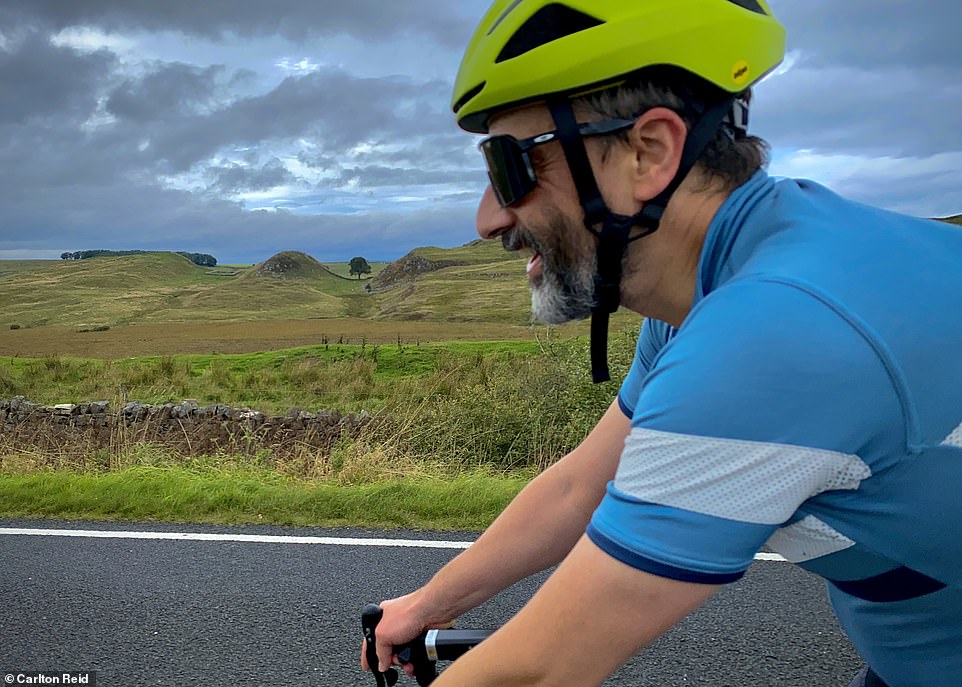 Ted is pictured here making steady progress through the Northumberland National Park, with Sycamore Gap and Hadrian’s Wall in the background

Now it was time for a feast for the stomach.

We’d snacked on energy bars, had a wrap and pasta at the excellent Vallum Farm tearoom, a few miles from the village of Corbridge, and had a refreshing pint of chocolate-flavoured raw milk at Bays Leap Organic Dairy Farm.

But my energy levels were sapped – Gino and his Italian fodder were calling. 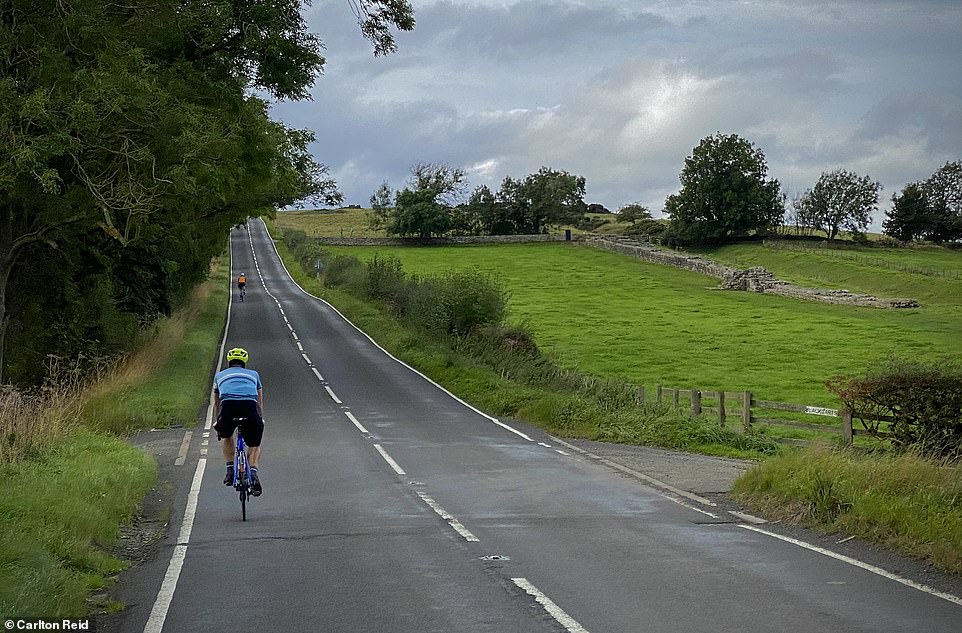 Ted, pictured, writes: ‘We’d had a feast for the eyes as well as the mind, cycling under bruised skies along mesmerising rolling Roman roads through a landscape that took the breath away almost as much as some of the climbs’ 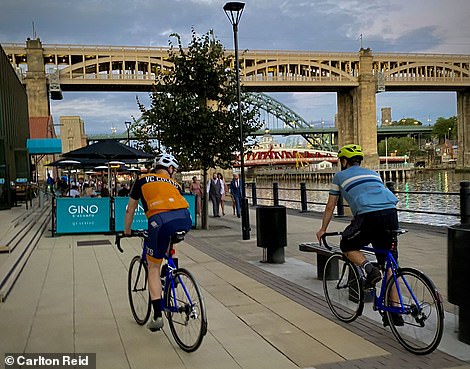 Colin, left, and Ted, right, arrive after their 77-mile adventure at Innside Newcastle

I had just enough left in the tank to shower and hold a pre-restaurant/disco pint of Moretti in the bar while ruminating on what sort of job the designers of the 161-room hotel – Newcastle and Vancouver-based Faulknerbrowns Architects – had done.

A good one, it transpires.

Sensibly, they’ve made views of the River Tyne, which flows mere yards away, and some of its epic bridges the priority.

We had a stunning view (even from the shower) of the river from our superb Studio Twin, along with the 120ft-tall High Level Bridge (a road and railway bridge), the Tyne Bridge, the Swing Bridge and the Gateshead Millennium Bridge. 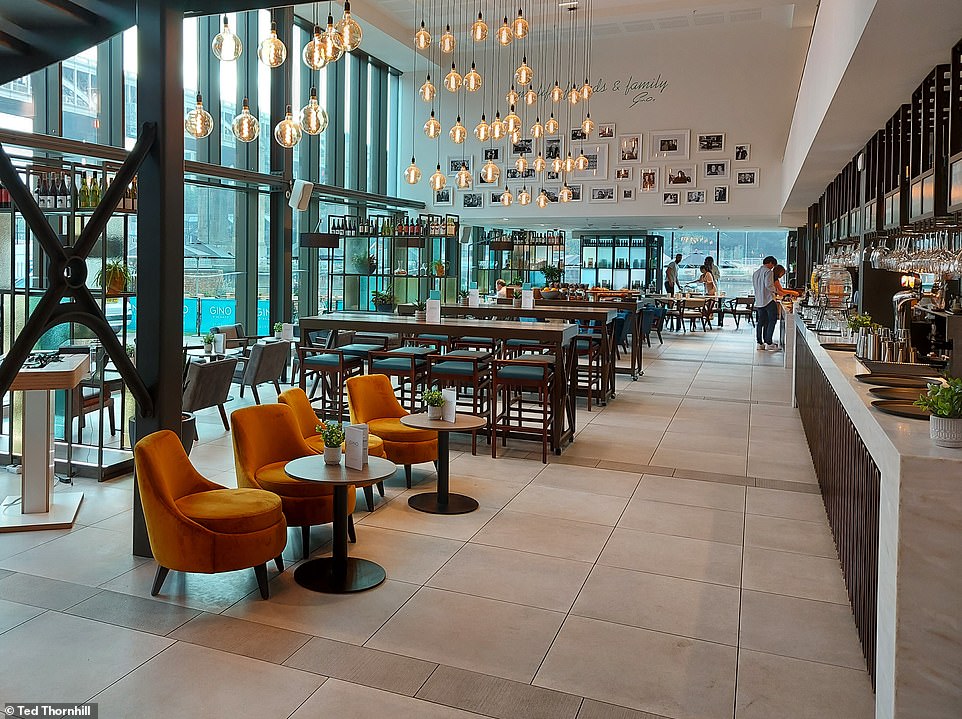 On the open-plan ground floor – home to the lobby/reception, bar and Quayside restaurant – there are floor-to-ceiling windows throughout 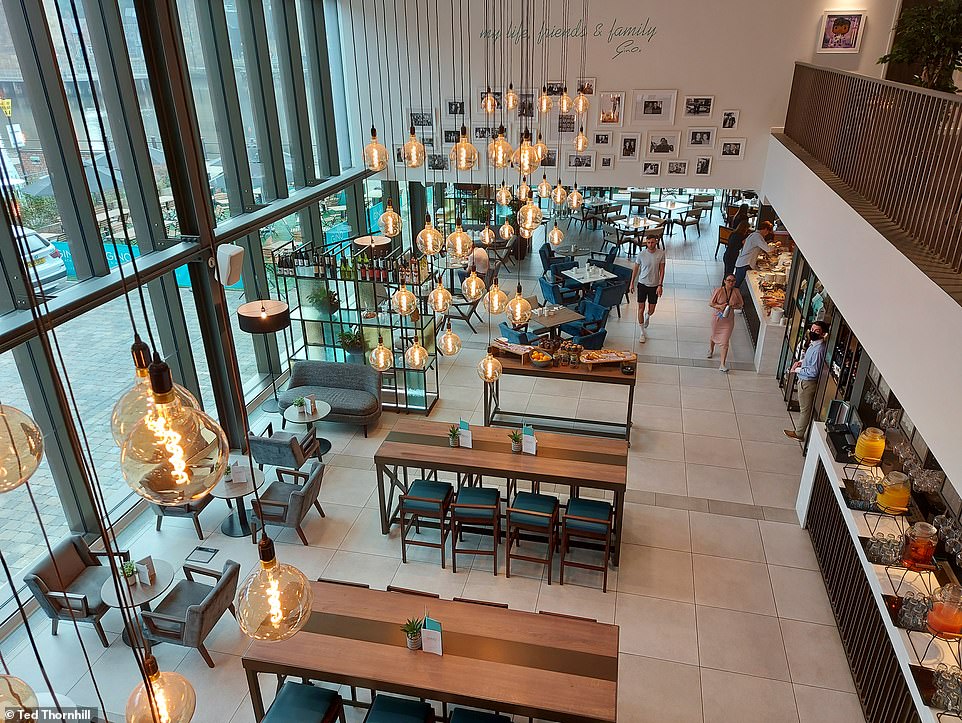 The windows, along with the double-level atrium design of the bar, give the downstairs space a wonderfully light and airy ambience 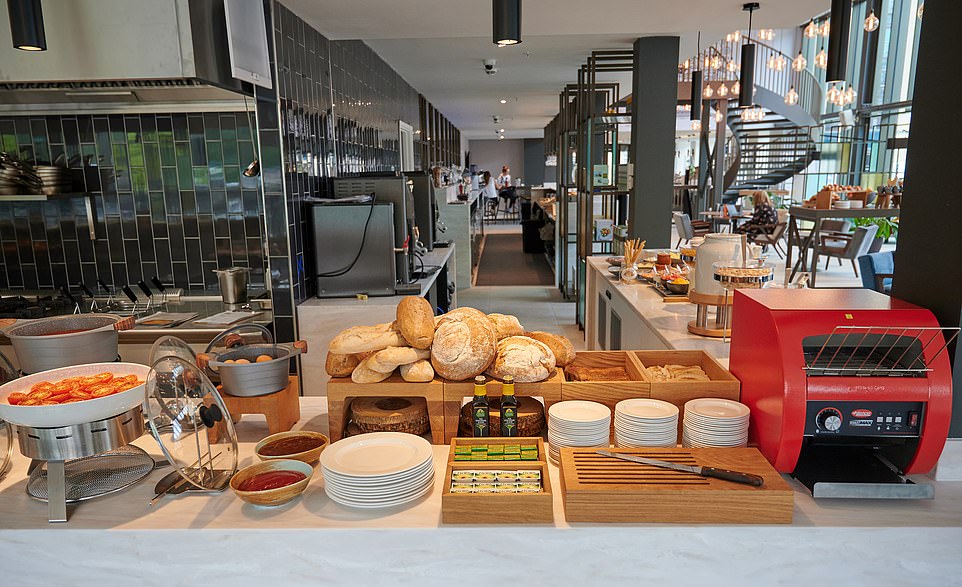 This picture shows part of the breakfast spread at Innside, which is laid out in the restaurant and bar area

THE JOYS OF TAKING THE TRAIN TO NEWCASTLE

We took the 7am from Kings Cross and it didn’t hang around, arriving in Newcastle three hours later.

On the way we take in some incredible sights from our seats – the impressive York station, the magnificent Durham Cathedral and the striking Angel of North, just before Newcastle. 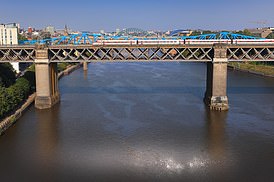 The arrival into the station there is breathtaking, with amazing views of the city and the River Tyne as the train crosses the mighty King Edward VII Bridge.

We arrived 10 minutes early and sat on the bridge waiting for a free platform. With the vista on offer? Bliss. 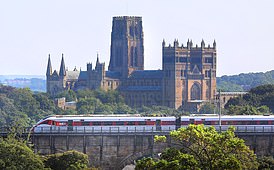 And on the open-plan ground floor – home to the lobby/reception, bar and Quayside restaurant – there are floor-to-ceiling windows throughout, so the river is easy to spot, even from the lobby at the road end of the building.

These windows, along with the double-level atrium design of the bar, give the downstairs space a wonderfully light and airy ambience.

The décor, meanwhile, is smart and modern, with a splash of hipster – there’s a ‘cloud’ of filament lights hanging from the ceiling in the bar and long wooden communal tables.

Every member of staff we met was bright and helpful and the service purposeful. A little too purposeful in the restaurant, where we decided to dine Italian style, with a pasta dish before a main grill course. The staff brought these out together. Perhaps they noticed how hungry we looked.

Each of the menu items includes a little description by Gino, which I thought was a cute touch.

For dessert we had chocolate fondant (£6.95) – ‘my son Rocco’s favourite dessert’. I could see why.

My chum Colin – the wine buyer for the Vagabond wine bar chain – declared that the wine list was ‘solid’ and opted for a bottle of extremely quaffable Pra Otto Soave to wash it all down with.

Too tired – and old, frankly – to go drinking in the city’s famous Bigg Market, we chose instead to walk around it before turning in.

It was the same old vortex of hedonism it always has been.

In the morning, we gazed along the Tyne from our room and watched as a jet-skier took the party to the water, pulling ‘doughnuts’ around one of the enormous columns of the High Level Bridge.

The final chapter of our weekend odyssey was a Metro trip to beautiful Tynemouth, where we met an old mutual friend for lunch at Riley’s Fish Shack on the seafront.

The ‘shack’, which houses the bar and kitchen, is right by the beach in a perfectly formed little bay.

We sat on pre-booked deckchairs (with a table and umbrella) as humorous waitresses delivered the freshest of Lindisfarne oysters (£3.65 each) and hugely satisfying portions of salted fish (£25) served with sourdough, caper butter, salad and potatoes (potentially the option for my last supper). 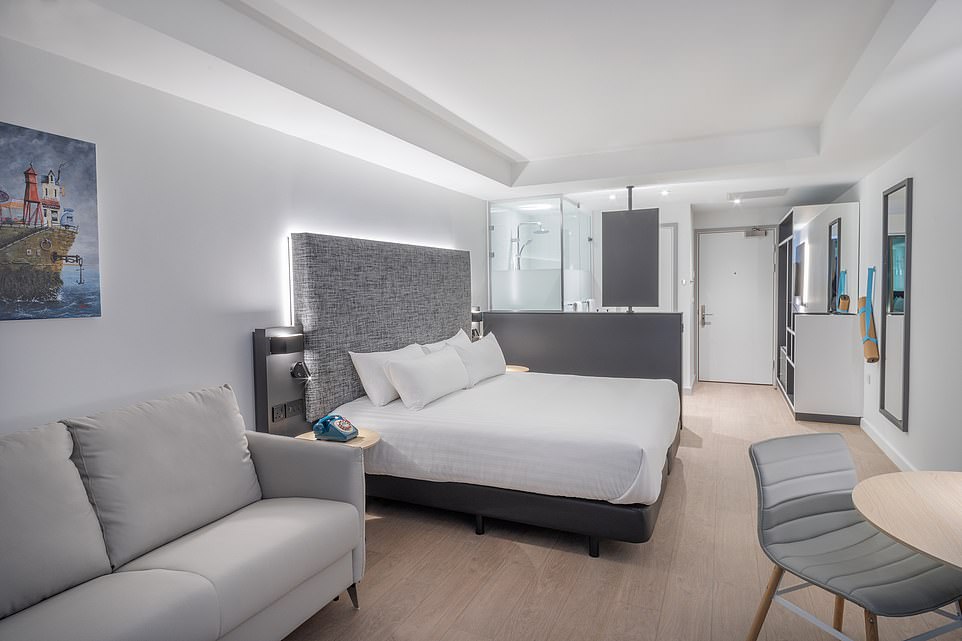 Ted’s room was a twin version of the Studio room shown. It had amazing views of the river and Newcastle’s bridges – even from the shower 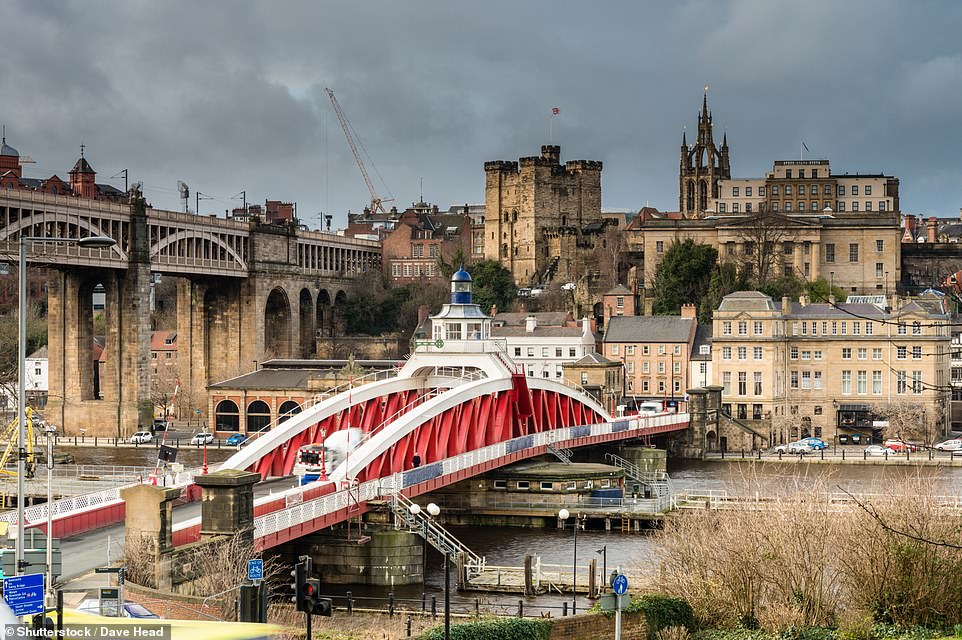 Back in 1995, a Texan tourism report declared that Newcastle was the eighth-best party city – on the planet 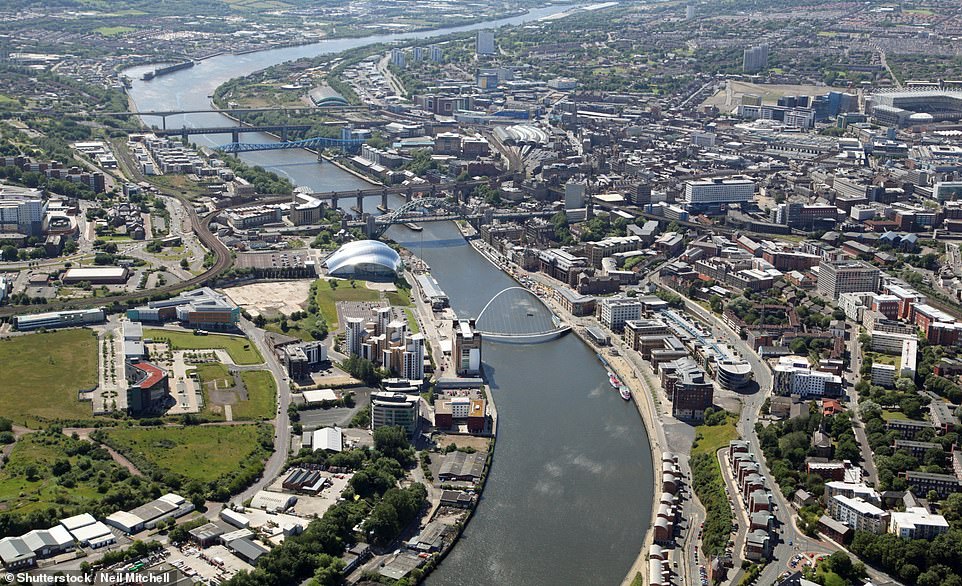 A stunning aerial shot of Newcastle and Gateshead, with bridges including the 120ft-tall High Level Bridge (a road and railway bridge), the Tyne Bridge, the Swing Bridge and the Gateshead Millennium Bridge straddling the River Tyne 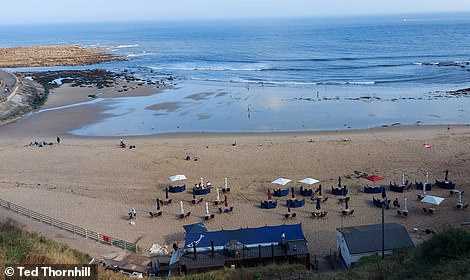 Carlton said Riley’s was ‘world famous’. I’m not sure about that – but it should be.

We sat in a contented daze on the zippy LNER service back home to London.

Innside Newcastle had been smart, comfy and fun and a great base for exploring some of Britain’s finest landscapes, most fascinating historical sights – and for reeling in some of the best seafood in the land.

Next time, I’ll bring my dancing shoes, as well as my cycling ones.

Ted and Colin were hosted by Innside Newcastle, where rooms start from £99 B&B.

LNER operates regular daily direct services between London King’s Cross and Newcastle, with journey times of around three hours. Booked direct at lner.co.uk, advance return fares start from £120.00 in first and £44.40 in standard, where passengers can now have food and drink brought to their seats.

hotel, in, New, Newcastle, Tha, the
You may also like: