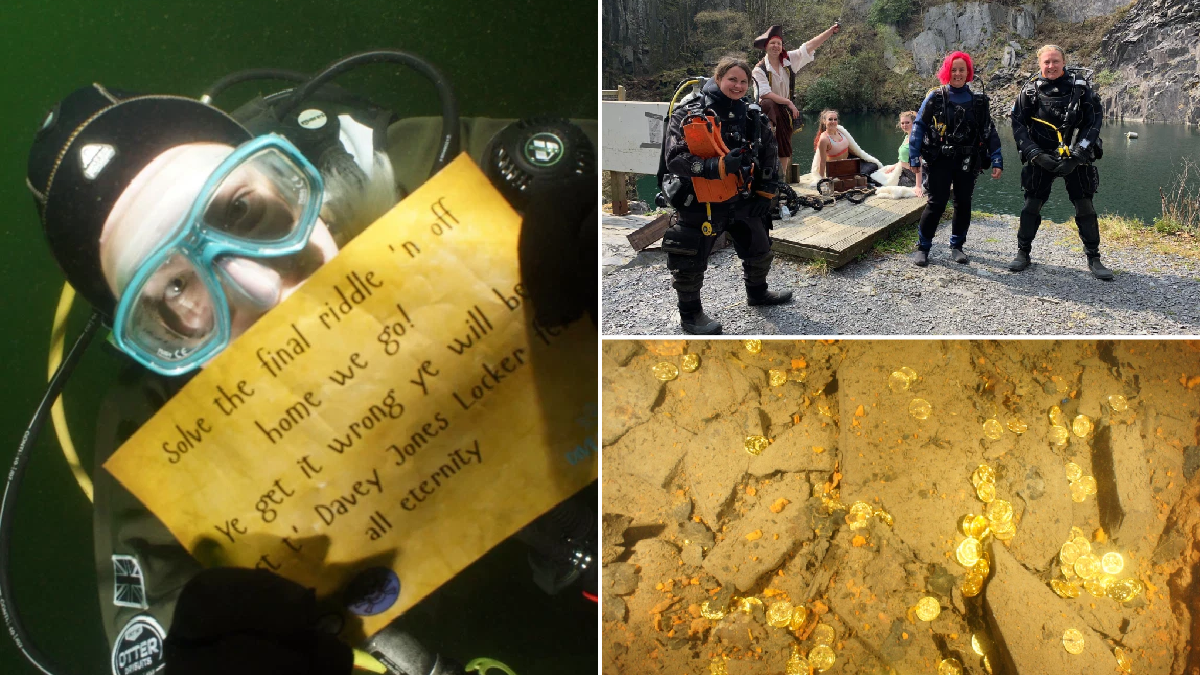 I haven’t had many memorable moments recently but wrestling a necklace from the clutches of a skeleton lounging at the bottom of a flooded Welsh slate quarry stands out.

I’ll back up. Last year, I obtained my Padi (Professional Association of Diving Instructors) Open Water Diver certification in the Maldives. But much as I loved diving the bath-warm waters while being flash-bombed by swarms of angelfish, my bucket list has subsequently been filled with dives closer to home, whether it’s swimming with Devon’s seals or exploring Scottish shipwrecks.

And now, rather unexpectedly, I’m taking on a session in the world’s first underwater escape room, found in Snowdonia’s Vivian Quarry.

Scuba Escape, which has just launched, is the brainchild of Clare Dutton, Padi course director and founder of Duttons Divers (duttonsdivers.com), and Padi instructor Leanne Clowes.

If you’ve ever visited Llanberis you’ve probably seen Vivian Quarry’s entrance, near Snowdon’s mountain railway: two imposing red wooden doors (perfect for the escape room concept) wedged into the side of what was once the world’s second-largest slate quarry.

The six 240-minute games test diving skills such as buoyancy and navigation. I choose the pirate-themed Treasure of Syreni and beforehand I’m sent a swathe of fascinating facts about shipwrecks and swashbucklers.

I arrive in Snowdonia on a surprisingly sunny April day, although there’s a definite chill when the quarry’s doors slam shut, despite sunlight pouring in from above.

The theming is fantastic, whether it’s the treasure chests and rum barrels scattered across the waterside platform where we buddy check our kit, or the briefing by a sword-wielding pirate under the gaze of mermaids lazing nearby.

Although my fellow competitors wear dry suits, I opt for a wetsuit and barely notice the cold. At 18 metres underwater, I’ve more pressing matters to deal with, like remembering the name of Blackbeard’s ship.

Visibility is surprisingly good. I spot a discarded quarry wagon and the rusting hulk of a submarine.

My diver certification allows me to dive to 18 metres, and the quarry’s 20-metre depth means it’s easy to avoid accidentally exceeding limits.

Sadly I’m unable to reveal further details or else I’d have to kill (or drown) you. But I can reveal that I find myself extracting messages from bottles, searching for buried treasure among boulders and grappling with a skeleton perched on a shipwreck.

The other five games are equally brilliant — themes range from zombie invasion to murder mystery. Their beauty isn’t simply in how they can be tweaked for different skill levels (the only requirement is an open water diving qualification) but in the way they test diving skills, which means they double as brilliant refreshers in between dives elsewhere.

Then again, in a year when Padi is reporting record-breaking numbers for courses, perhaps a tussle with a skeleton in a Welsh quarry is the post-lockdown stress relief we all need.

The first place in the UK to be named a Marine Conservation Zone, you’ll find one of the most vibrant marine life areas in the country thanks to the action of the Gulf Stream . There are ten diveable wrecks, and you’re likely to see lobsters, jellyfish, crabs, and, most of all, grey seals, who’ll get up close and personal while you’re underwater.

One of the most famous dive sites in the UK, largely thanks to the 52 German naval ships which were sunk here during WWII. Today there are seven left, and one called Tabarka is a favourite for divers to explore because it’s easily accessible (at a depth of 14-18m) and surrounded by clear water.

Testament to the fact that these islands mark one of the most dangerous shipping areas in the UK, dozens of wrecks lie on the seabed. This is also home to another grey seal colony — around 5,000 of them swim around these waters — and a number of nesting bird species including the puffin.

Off the Lizard Peninsula, this diving site is home to incredible drop-offs, reefs, and dozens of shipwrecks, ranging from 8m to 80m deep. One of the most famous is the Mohegan, which sank in 1898 and is even said to be haunted. Most likely any feelings of eerieness will come from the conger eels which like to hide inside.

When is the next UK green list travel update?

Green list countries: Which holiday destinations can I travel to from the UK?