Customer ‘HYPNOTIZES shoe shop worker, 30, and rapes her’ at Italian store: Victim ‘only realised after watching store’s CCTV the next day’

A customer allegedly hypnotised a shoe shop worker and then raped her at the store in Italy.

Adil Muhammad, 45, allegedly entered the women’s shoe store pretending to be a scarf salesman before drugging the clerk and raping her in a shop south of Padua on November 30.

She took several days to file a complaint because she did not realise what had happened until she reviewed CCTV images from the incident. 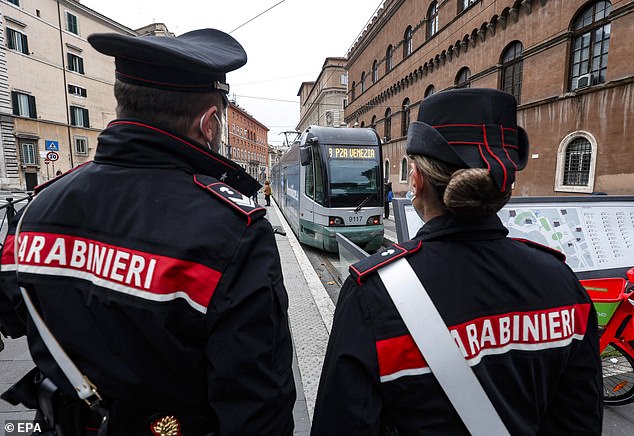 Adil Muhammad, 45, allegedly hypnotised a shoe shop worker and then raped her at the store south of Padua, Italy. File picture shows police in Rome

Muhammed showed the victim one of his scarfs before pulling a thread and setting it alight, giving off fumes which stupefied her, L’Unione Sarda reported.

He then put his hands to his temples and made sounds to hypnotise the woman before kissing and raping her.

The 45-year-old left an hour later, when a customer entered the shop.

He was apprehended after the alleged victim filed a report on December 2, police said.

Muhammad was arrested on suspicion of sexual assault.

He had tried a similar attack on two other residents but had not succeeded, local media reported, without providing details.