London: The young son of an Australian man killed in last Friday’s petrol station blast in Ireland has urged people to be grateful for their families and for their lives.

Hamish O’Flaherty, the 12-year-old son of Sydney-born James O’Flaherty, told mourners at his father’s funeral at St Mary’s Church in Derrybeg, was a hard-working, loving father, who read to him every night. 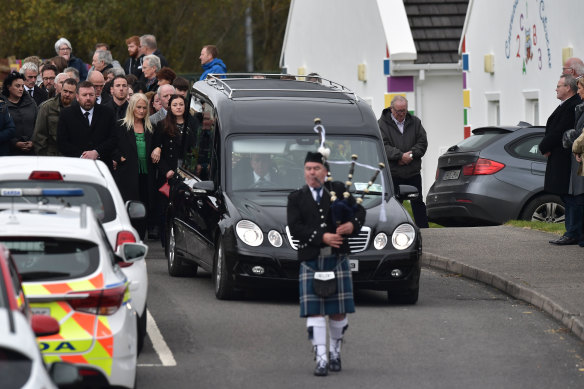 Mourners watch the arrival of the coffin as they attend the funeral of Martin McGill at St Michael’s church in Donegal, Ireland on Tuesday. James O’Flaherty was buried on Wednesday.Credit:Getty

O’Flaherty was one of the 10 people killed last week. Two of the 10 victims — Jessica Gallagher and Martin McGill — were laid to rest after the funeral masses on Tuesday.

Creeslough, a village of about 400 people, is about 24 kilometres from Letterkenny in the north-west of Ireland and 48 kilometres from the border with Northern Ireland. The incident, which is still under police investigation, has been described as the “darkest day in Donegal”.

Speaking at the end of the service, Hamish, who himself narrowly avoided serious injury himself, said: “If I have learned anything it is that we should be grateful for our families because they won’t be there forever. Be grateful for your life. It won’t last forever.”

O’Flaherty, 48, was remembered as a much-loved father and husband at the funeral for the Australian engineer. He had settled in the former fishing port of Dunfanaghy, about 10km from Creeslough, with his wife Tracey and son. 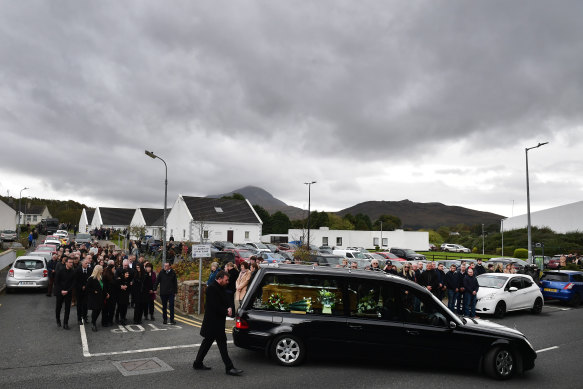 The funeral at St. Michaels church in Donegal, Ireland. Credit:Getty

The Irish Examiner reported Hamish was sitting in his father’s car in the service station forecourt at 3.20pm last Friday, looking out the passenger window when the blast went off. O’Flaherty had collected his son from school last Friday and stopped for petrol before the pair were to go for a walk in Creeslough’s Duntally Wood Nature Reserve.

The paper reported that Hamish escaped injury by chance, having dropped something he had in his hand and leant forward and down to pick it up. Debris flew in all directions, shattering the car’s windows, but miraculously, it flew over Hamish’s head.

Dr Dan Gill, who is a GP based in nearby Falcarragh, rushed to the scene of the explosion and said he did not expect to discover his neighbour O’Flaherty to be among the dead. He said Hamish’s actions had “saved him from a significant injury”.

At the end of the service Hamish told mourners that he wanted to say a few words about his father.

“He was a great man. He worked very hard and very long each day. Whether it was around the house or at work,” he said.

“He wore a jacket with a huge paint stain on the side of it everywhere. He managed this by leaning on a wall which was still wet with paint. He wore the jacket everywhere. To the shops, to the movies, to the beach.”

“I would like to say thank you to all of the people who have given and offered so many things.”

Mourners applauded him as he was led back to his seat by his mother while uniformed students from Hamish’s school, Faugher National, provided a guard of honour as his father’s remains were brought into the church. Gifts were presented at the beginning of the Mass, including a box of chocolates and a framed family photography.

A copy of Roald Dahl’s Going Solo was also brought to the altar, with the father and son having been reading the book before the tragedy.

Ireland’s President Michael D Higgins was among the mourners who attended the service.

Fr Brian O Fearraigh said James had “showered his loving son and wife in hugs and kisses every day”.

“James O’Flaherty was a generous and a kind man. He loved chatting to other people and he just wanted to spend all his free time with you – his family,” he said. “He was a man who had high morals which I’m told are traits and values that he shared with his late father.” 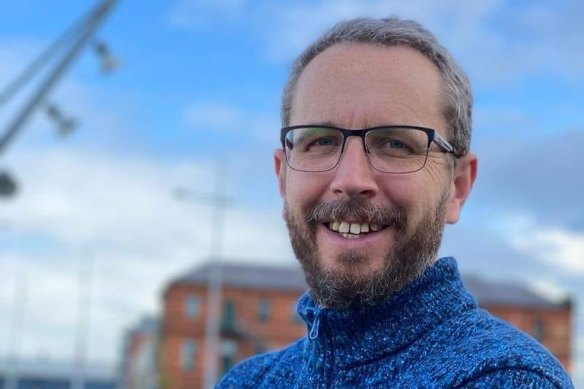 James O’Flaherty, 48, originally from Sydney, died in the blast.

He also mentioned his culinary skills, which included his “crazy omelettes” — in which, the priest said, “you never knew what you might find in them”.

He said an example of how much he loved his son was the fact that despite being a big fan of golf and living near some great courses, he once told Hamish: “Why would I play golf when I could spend the time with you?”

The Examiner reported that representatives from the multinational he worked for, Jabil, flew in from the United States to be at the funeral. 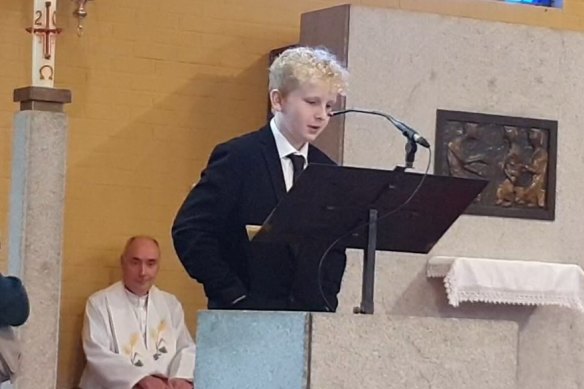 Speaking after funeral, Higgins told reporters it was important to recognise that when a terrible disaster happens, that it doesn’t weigh only on those who have lost their lives or those who are injured or their families.

“It’s a lesson to everybody to see, in a way, how an entire community can be initially numb with the tragedy and interpreting it, but the way they’re able to respond,” he said.

Catherine O’Donnell, 39, and her 13-year-old son James Monaghan were also buried on Wednesday.

The other victims of Friday’s explosion were 50-year-old Robert Garwe and his five-year-old daughter Shauna Flanagan Garwe, who were in the shop to buy a birthday cake; 14-year-old Leona Harper; 59-year-old Hugh Kelly; and 49-year-old Martina Martin.