There’s more than one way to get rid of a fish, but not all of those ways are OK.

The Texas Parks and Wildlife Department announced that 406 invasive fish were recently removed from one of the state’s rivers. These fish likely ended up in the river due to dumping, a dangerous practice that could harm the ecosystem.

Hundreds of suckermouth armored catfish, also known as plecos, were removed from San Marcos River. The Texas Parks and Wildlife Facebook page posted that not only do these fish compete with native fish for resources, they can also cause serious damage.

These non-native fish dig burrows in the river banks, which can cause erosion.

“Researchers from Texas A&M and Texas State universities recently removed a total of 406 invasive suckermouth armored catfish (SAC; aka plecos) from the San Marcos River during a dewatering event at Rio Vista Park,” Texas Parks and Wildlife wrote on Facebook. “Information collected from these fish will help managers to better understand how to effectively control this invasive species. SAC have been introduced to numerous water bodies in Texas through aquarium dumping–Never dump your tank!”

Dumping pet fish into natural bodies of water has led to problems before. 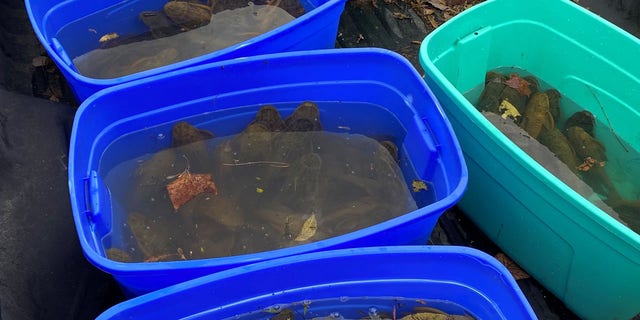 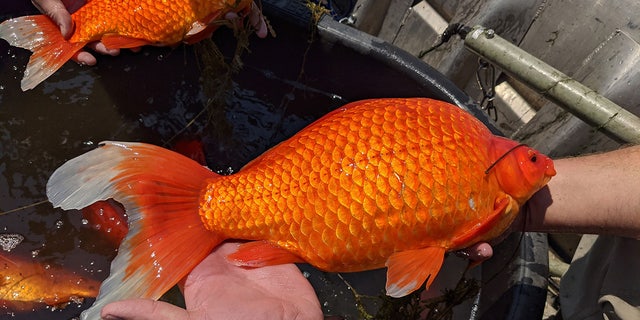 Last year, officials discovered 20 large goldfish in a Minnesota lake that were likely put there after being dumped from aquariums.
(City of Burnsville)

The city’s official Twitter account posted a message about the fish, writing, “Please don’t release your pet goldfish into ponds and lakes! They grow bigger than you think and contribute to poor water quality by mucking up the bottom sediments and uprooting plants. Groups of these large goldfish were recently found in Keller Lake.”