Phone records and Australian Federal Police documents will be examined in the weeks before the defamation trial brought by Victoria Cross recipient Ben Roberts-Smith, as lawyers attempt to gather more information about potential contact with witnesses.

Mr Roberts-Smith, 42, is suing The Sydney Morning Herald, The Age and The Canberra Times over a series of stories published in 2018, which he says are defamatory because they portray him as someone who “broke the moral and legal rules of military engagement” and committed murder. 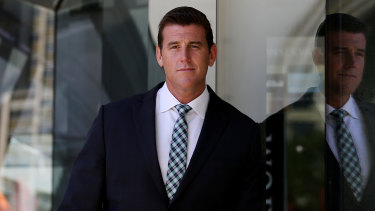 An estimated eight-week trial will start in the Federal Court in Sydney on June 7.

During a brief procedural mention on Wednesday, a registrar said Optus and Telstra have produced documents to the court after a subpoena was issued at the request of the media defendants.

Mr Roberts-Smith’s barrister Matthew Richardson said the newspapers had sought various records relating to four phone services, due to the belief the phones were used to communicate with specific witnesses.

The barrister successfully sought for Mr Roberts-Smith and his legal team to have first access to the records until 4pm on Friday, to see if they contain personal or business information which has no connection to the case.

Mr Richardson said if such information was handed over unchallenged, including potential information relating to Mr Roberts-Smith’s employment at Channel 7, the subpoena for the documents would become a “fishing expedition”.

Jeremy Forbes, appearing for the newspapers, said the media has also sought information from Australian Federal Police, with a subpoena earlier this month asking for copies of handwritten notes or envelopes provided to investigators by John McLeod.

In court documents, lawyers for the newspapers said it will be argued at trial that Mr McLeod was involved in sending an envelope at Mr Roberts-Smith’s behest to a former SAS soldier who served with him in Afghanistan.

The AFP has produced some of the requested documents, the court heard, but others will be subject to a claim of public interest immunity because they relate to an ongoing investigation.

Mr Roberts-Smith has argued in the defamation case that the newspapers wrongly suggested he disgraced his country and the Australian Army through his conduct overseas. He was deployed to Afghanistan six times between 2006 and 2012 as a soldier in the SAS.

The newspapers argue the articles do not convey the defamatory imputations pleaded by Mr Roberts-Smith and he is not identifiable in some of them.

However, if the Federal Court finds the articles did identify and defame him, the outlets have pleaded a defence of truth to all the claims, including alleging Mr Roberts-Smith was involved in unlawful killings in Afghanistan.

The case will return to court on May 26.