Follow
Home » World News » Some 1.9MILLION jobs are still on furlough despite 590,000 fall

Some 1.9MILLION jobs are still on furlough despite 590,000 people returning to work in a month – amid fears hundreds of thousands will be unemployed when scheme ends

Furlough numbers fell by another 590,000 last month – but 1.9million jobs are still being propped up by the government.

The drop in wages being underwritten by the scheme emerged with the next stage of withdrawing the support happening this weekend.

Some 1.9million employments were covered in June, down from 2.4million a month earlier. Those on full furlough also dipped from 1.23million to 970,000, as people went back part-time.

However, despite the UK’s strong economic recovery there are fears hundreds of thousands of jobs could face the axe when the arrangements are dropped altogether.

June’s furlough numbers are the last more of the burden is shifted from the Treasury to companies.

From this month employers had to pick up 10 per cent of their employees’ salaries, while the Government’s proportion was cut from 80 per cent to 70 per cent.

From Sunday employers will pick up 20 per cent and the government 60 per cent, and the scheme is slated to end after September.

The number of people on furlough has been dropping since January when 5.1million workers were stuck at home.

They were guaranteed 80 per cent of their salaries – up to a ceiling of £2,500 a month – from the Government scheme.

However, going into July more than one in four employers still had some of their staff on furlough.

Around 58 per cent of jobs at UK airlines are still furloughed. 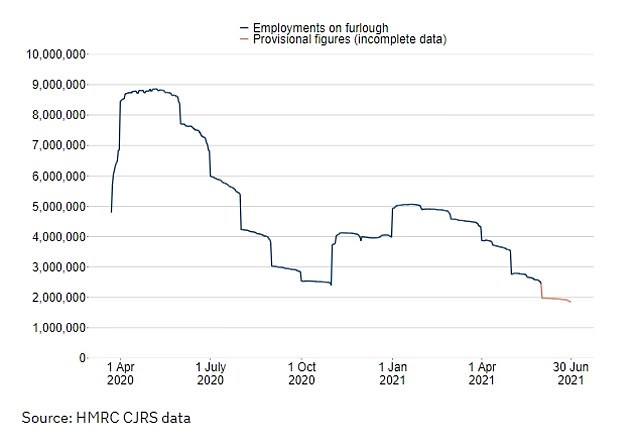 Furlough numbers fell by another 590,000 last month – but 1.9million jobs are still being propped up by the government 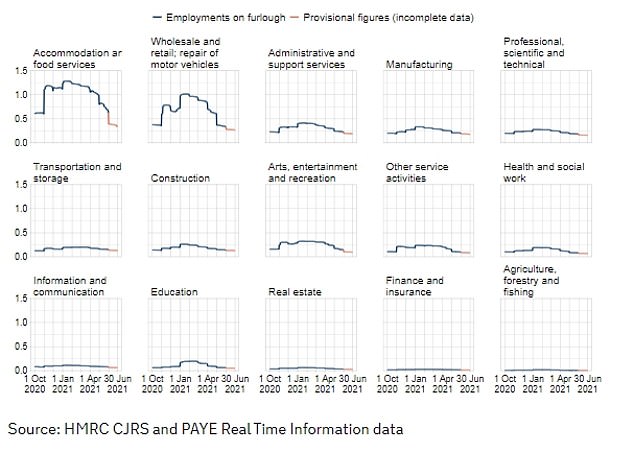 Travel agencies and tour operators, photographers and the arts also still have many people on furlough.

Chancellor Rishi Sunak said: ‘It’s fantastic to see businesses across the UK open, employees returning to work and the numbers of furloughed jobs falling to their lowest levels since the scheme began.

‘I’m proud our plan for jobs is working and our support will continue in the months ahead.’

Charlie McCurdy, an economist at the Resolution Foundation, said: ‘The number of furloughed employees has fallen below two million for the first time as the economy continues to reopen. But that is higher than many expected, and a cause for concern as the scheme is wound down.

‘With employer contributions to furloughed staff doubling from this Sunday, and the scheme ending completely in just two months’ time, it’s vital that as many furloughed staff as possible return to work soon, in order to limit the rise in unemployment this Autumn.’

Young people have been the most likely to be on furlough throughout much of the pandemic, but this changed in June when they moved off the scheme twice as fast as all other age brackets.

Now, staff over 65 have the highest furlough levels of any age group.