A French Banksy is filling potholes with pretty mosaics 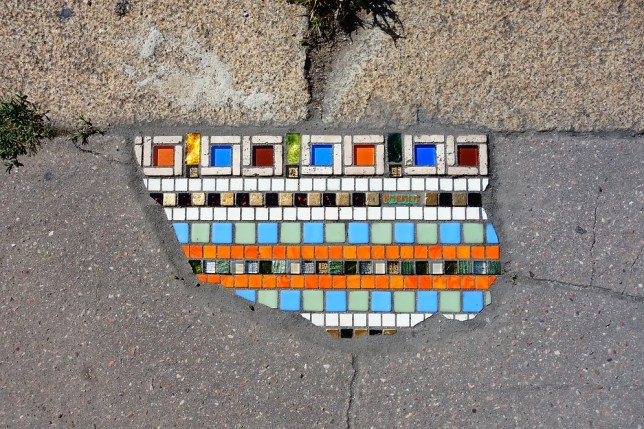 We all know Banksy, but have you heard of Ememem?

Thanks to the ceramic designs, he’s turning something potentially hazardous (and unsightly) into a pretty photographic moment. The Lyon-based artist describes his work as ‘the art of healing the street’.

While most of his work is in Paris and Lyon, you can also spot artworks in Norway, Ireland, Scotland, Germany, Italy and Spain – there are over 400 in Europe.

Starting in 2016, but only gaining widespread attention in the last year or two, Ememem calls his work ‘flacking’, taken from the French word ‘flaque’ (meaning puddle), to mean ‘art of repairing holes’.

The artist began as part of an underground Lyon collective and his work is influenced by traditional Japanese kintsugi – the art of repairing while enhancing.

Online, he writes his ‘plasters illuminate the wounds of the urban fabric’, making his work deep and symbolic.

So far, he’s had six pieces commissioned by Lyon authorities, due to their popularity.

On Instagram, people love his work, with many often commenting, asking him to visit their hometown and fill a pothole.

Someone wrote under a recent post: ‘Your work brings me great joy. Keep up all the great work.’

Another added: ‘Your art is probably my favourite of all time. So unique and instantly beautifies any street.’

The everyday art we all need.