Australia is missing out on tens of billions of dollars in economic activity because fewer women than men take part in the workforce, according to a new analysis that finds structural changes are needed more than a push for better education.

Over the past decade, the gap between male and female workforce participation has narrowed, but the pattern of it peaking in the years when families are likely to have young children persists. 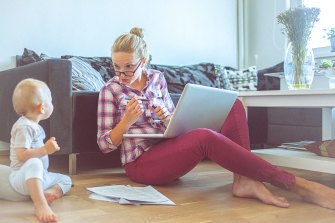 The government has acknowledged that making childcare more affordable is a key way to increase women’s workforce participation.

Analysis by Equity Economics of the factors keeping women out of the workforce says this points to the importance of having children to the differences in participation compared with men.

In the latest World Economic Forum global gender gap report, Australia dropped to 50th out of 156 countries, and 70th on economic participation and opportunities.

In Victoria, the participation gap was 10.2 points and in NSW 9.8 points, both larger than the national average of 9.5.

Participation for men and women was highest in Western Australia, but the gap between them was also the largest in that state, with an 11.2 percentage point difference. Queensland had the second-highest participation rate and the smallest gap between men and women, at 8.1 points.

Equity Economics’ lead economist Angela Jackson estimates in a report for lobby group The Parenthood, released on Thursday, that closing this gap could lift Australia’s GDP by 8.7 per cent, or $353 billion, by 2050.

She found policy settings were the most likely driver of the workforce participation rate here compared with other developed countries, noting Australian women were among the world’s most educated.

The Parenthood’s chief executive, Georgie Dent, points to Sweden as an example of what could be achieved with changes such as more and shared parental leave, and cheaper early childhood education.

“It’s really easy to sit and think, ‘Well, Sweden is one of those Nordic utopias and Australia could never be like that’,” Ms Dent said.

“The conversation we ought to be having is how can we become more like Sweden.”

The Equity Economics modelling shows if Australian mothers had a similar working pattern to those in Sweden, they would earn an extra $696,000 on average over their careers.

The federal government is tweaking childcare subsidies from March to make care cheaper for families with two or more children under five. It estimates this will help 250,000 families, about a quarter of those who use childcare.

Sam Mostyn, the head of Chief Executive Women, backed the need for long-term commitments to affordable and accessible childcare and a parental leave system that allowed men and women to share care.

“To lift long-term productivity and maximise our talent we need significant investment in foundational social infrastructure, and to put care at the centre of the economy,” she said.