The industrial umpire has told the federal government to reveal if it will fund a bumper 25 per cent pay claim for workers in the troubled aged care sector in the wake of the damning aged care royal commission.

The commission found there were too few aged care staff with too little training in the sector to give many residents a good quality of life and recommended that one way of addressing it was higher pay. 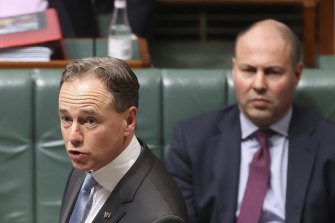 Australia’s largest union, the Nursing and Midwifery Federation, and the Health Services Union are bringing a case in the Fair Work Commission, which sets industries’ minimum pay rates, demanding a 25 per cent pay rise.

But its odds of success depend on whether the federal government that funds the sector comes to the table with more money for staff pay, in addition to the $17 billion it committed in the budget.

So far, it has not done so but the commission has told it to make the information it can available by July 23.

A spokeswoman for Health and Aged Care Minister Greg Hunt said the government would respond to the commission’s requests, though lawyers for the government said last month that some of the information sought may be unavailable or subject to cabinet confidentiality.

“The government has invested a record $17.7 billion in aged care in response to the royal commission,” Mr Hunt’s spokeswoman said. “This includes specific initiatives to support wages, including a bonus for nurses to assist in raising the quality of care.”

If the unions are successful, personal carers in nursing homes would see their minimum wage go up by about $5 an hour, from $23.09 to $28.86 on wage rates when the application was lodged. Home care workers and registered nurses in aged care facilities are also in line for the pay rise if the case is successful, though it could also only be granted in part.

“Aged care workers do an outstanding job and they deserve recognition with a pay rise,” Ms Sparrow said. Sean Rooney of Leading Age Services Australia, an industry body with more commercial members, said the industry had found it hard to deliver pay rises because of “inadequate” funding.

Big jumps in minimum pay happen rarely in Australia’s industrial system and are made much easier by government funding support. The only successful equal remuneration, which is a legal technique to raise the wages of workers underpaid because of their gender, was granted in 2012 for community and social workers after the Gillard government pledged $3 billion to fund it.

Health Services Union national secretary Lloyd Williams urged the government to take the same course this time around. “They can’t just rely on training alone, the government knows that there’s a fundamental traction and retention problem that goes to pay and job security,” Mr Williams said.

Final hearings by the Fair Work Commission are scheduled in 12 months’ time with a decision due after that.

Canberra, Get, pay, to, told, up
You may also like:

What is injectable concealer? The eye-brightening tweakment that promises to banish dark circles and bags