Hundreds of pokie players will soon go cashless at the slots under a long-promised “digital wallet” trial as the state’s crime commission warns laws are increasing avenues for criminals to launder illicit cash.

The 12-week trial targeted at reducing gambling harm and money laundering is expected to start at Wests Newcastle in the next month, more than a year after the concept was first floated, with support from the gambling lobby.

The opt-in wallet will be linked to a player’s identity and an Australian bank account, and will include harm minimisation protections such as spending limits and real-time spending data. 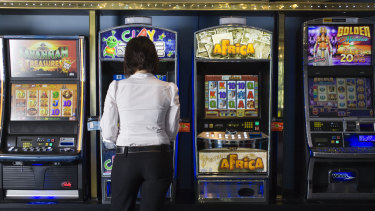 The first “digital wallet” trial is due to start at Wests Newcastle in the next month.Credit:Louie Douvis

Poker machine giant Aristocrat Leisure will oversee the trial of the technology that has been rolled out across 38 of its machines, to be used by at least 300 patrons.

Hospitality and Racing Minister Kevin Anderson said the government had approved two additional gaming manufacturers – IGT and Utopia Gaming – to conduct cashless trials, while another two applications were under consideration.

“The trials will explore different technologies and solutions with the common goal of addressing harm minimisation and anti-money laundering,” he said.

Anti-gambling advocates have welcomed the delayed trial, but say it is a drop in the ocean of the state’s 95,000 electronic gaming machines abused by organised crime groups to “wash” thousands of dollars at a time.

It comes amid an ongoing royal commission-style inquiry by the NSW Crime Commission into the rampant criminal use of gaming venues to wash dirty funds. The probe recently called for submissions about gaps in current laws, including the state’s machine credit limits of $5000 to $10,000, which are up to 100 times higher than other states.

Credit limits in clubs and pubs in Victoria and the NT are $1000, while in Queensland and South Australia the upper limit is only $100.

In a paper published this month, the commission considered whether limits should be “significantly reduced” to deter criminals seeking to exploit higher limits to conceal illicit funds.

The paper canvassed a scenario in which a person inserted $5000 cash being the proceeds of crime, placing one losing bet of $5 before cashing out $4995. Their ticket displays accumulated credits, but not the value of the bet made or won. This is repeated several times at different venues.

The commission found “a lack of detail and transparency” on tickets created a potential avenue for exploitation.

Tim Costello, from the Alliance for Gambling Reform, said the scenario was “nothing we didn’t already know”, but it highlighted the urgent need for cashless gaming to “break the business model of organised crime”.

The first iteration of a statewide cashless gaming scheme was proposed by Customer Service Minister Victor Dominello last year. However, that plan met fierce opposition from the industry and Coalition colleagues, including then-deputy premier John Barilaro who insisted the Nationals would never support it.

“It is inexplicable why NSW poker machines can legally be loaded with up to $10,000 cash. These problems can be addressed very quickly with simple regulatory and legislative reform, like reducing the load limits and moving to cashless gaming.”

The 12-week trial at Wests Newcastle will offer a Bluetooth connection between a patron’s mobile phone and the machine, allowing them to transfer money directly from their phone onto the machine.

Other technology being installed will force patrons to leave a gaming area to transfer funds.

Anderson said all applications for cashless payment solutions would be closely assessed before any trials, adding “when it comes to digital solutions there is no one size fits all model”.

“We are keen to support any genuine harm minimisation measures and believe that cashless gaming
cards may prove helpful if it is not left to the clubs themselves to administer,” he said.

‘A rock star, a Marxist and a monk’: How an Australian ‘Beatle’ became a bishop