Erika Jayne’s upset and anger toward Garcelle Beauvis on Wednesday’s episode of “The Real Housewives of Beverly Hills” was actually directed at production, an insider exclusively told Page Six.

While Jayne, 50, accused Beauvais, 54, of “betraying” her friendship by revealing that Tom Girardi still called her amid their divorce in a scene with all of their castmates, we’re told that Jayne felt she was actually “betrayed” by producers and the network.

“They cut it and paste it in a way to make it look like she was upset, but she was actually mad that Garcelle was told what to say three times and she took the bait,” the insider revealed. “They had three different conversations about the same subject.”

The insider added, “What they didn’t show is that Erika and Crystal [Kung Minkoff] had a private conversation where no cameras were on, and producers heard it via their mics. When they got in the car, producers said they overheard it and asked Crystal to ask [Erika] on camera. Bravo didn’t want to do the fourth wall. They pulled a fast one.”

We’re told that Beauvais was “actually never a part of the conversation” that Minkoff and Jayne had and “that’s why footage of the women walking with their backs to the camera was shown with the voiceover from the hot mic.”

However, a separate source close to production insisted to us that “Erika’s reaction to Garcelle was genuine.”

The behind-the-scenes drama first came to light Thursday when Lisa Rinna posted an Instagram Story that read, “Dang it…I wish they had shown the screaming fight between the producer and Erika last night on the show in La Quinta. Now that would have been epic TV. Too bad. Bravo Bravo F–king Bravo.” 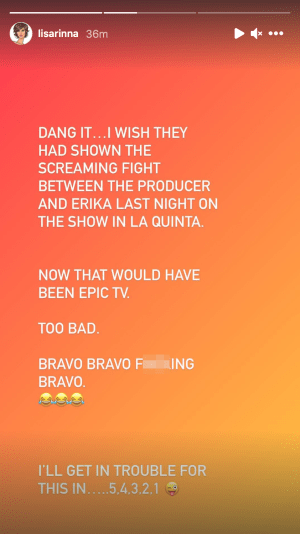 “Bravo, Bravo, Bravo” was a phrase that the cast came up with during the reality show’s first season (2010 to 2011) to try to prevent footage of the women touching themselves up from being shown.

“We would touch up our makeup, and then they’d be like, ‘Pull the cameras back up!’” Kyle Richards explained on the “RHOBH” aftershow in July 2020. “The show was so new to us, we didn’t want to be, like, caught touching up our lip gloss — which now you’ll see us do that in scenes all the time — that we’d go, ‘Hold on! Bravo, Bravo, Bravo! Hi Andy Cohen!’ Like, touching up our lip gloss. That was that.”

The expression became public knowledge when Denise Richards tried to use it to get a tense dinner scene cut where Teddi Mellencamp confronted her over allegations that she had an affair with Brandi Glanville last season.

Denise’s tactic didn’t work, and it instead became a fan-favorite phrase.

“The Real Housewives of Beverly Hills” airs Wednesdays at 8 p.m. ET on Bravo.