Melburnians are days away from ending their sixth citywide lockdown when restrictions ease on Friday under greater freedoms than had been previously flagged.

Ten people will be allowed in homes, up to 20 patrons permitted to dine indoors, the travel limit will be scrapped within metropolitan Melbourne, including the Mornington Peninsula and the controversial curfew will end from 11.59pm on Thursday.

Epidemiologist Professor Tony Blakely welcomed the changes but has warned the easing of restrictions will come at a price: more deaths, morbidity, long-COVID and increased pressure on the healthcare system. “I want everyone to understand doing what we’re doing will probably be OK, but there’s a moderate risk – not a small risk – we may have to put the brakes on the freedoms if cases continue climbing and the hospital service is under pressure,” he said.

When the state hits its 70 per cent double-dose vaccination milestone, the staggered return of school students in metropolitan Melbourne will also be brought forward to Friday, enabling children in years 5, 6, 7, 10 and 11 to resume on-site learning a week earlier than first flagged. All year levels in regional Victoria will be allowed back into the classroom.

The easing of restrictions on Friday are predominantly centred around social freedoms. Businesses have been asked to wait a further 10 days for any meaningful changes.

Tim Piper, the Victorian head of employer association Ai Group, urged the Andrews government to consider bringing forward that date by about four days to give businesses an opportunity to kickstart their trade for the Melbourne Cup long weekend.

“We have to consider this as both a health and an economic crisis and maybe the date of important events in the calendar should be taken into account,” Mr Piper said. 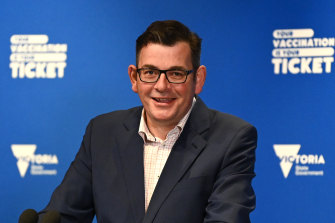 “If we reach 78 per cent, for example, prior to the Cup carnival, maybe that will be enough to have crowds for Derby Day, or for Melburnians to head to regional Victoria for the weekend.”

But with high vaccination coverage and two years of lockdown fatigue, which Professor Sutton on Sunday acknowledged had contributed to lower levels of compliance in recent weeks, Victoria’s strategy of locking down the entire state or city to save lives and protect the healthcare system will be a feature of the past.

Under the national cabinet plan, there is scope for lockdowns, though, they will be more targeted and measured.

“If you have a particularly vulnerable community where vaccination rates were very low, then there is, in the national cabinet plan, there is the prospect that is something that’s quite focused and it’s quite targeted,” Premier Daniel Andrews said.

“Today we’re moving beyond [statewide lockdowns] – we’re not locking people down any more across the board, instead we’re locking people out who have not got vaccinated.”

The curfew will end, and the 15-kilometre travel bubble, which was initially planned to increase to 25 kilometres once the state reached the 70 per cent double-dose vaccination milestone, has been scrapped. Rules surrounding travel between the regions and Melbourne will remain in place, but Victorians will be allowed to travel interstate.

Hospitality venues will be open for indoor food and drink service for up to 20 fully vaccinated patrons, in addition to the outdoor cap of 50. 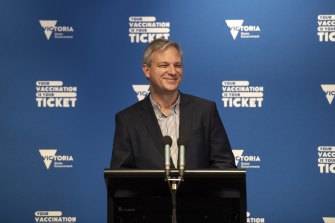 Chef/restaurateur Scott Pickett was jubilant about the news he can reopen his restaurants from Friday.

“I’m pretty f…ing relieved that it’s come,” said Mr Pickett, the owner of restaurants including Matilda in South Yarra and The Estelle in Northcote, and author of A Cook’s Story.

Mr Pickett’s venues had been war-gaming different scenarios based on when the state might reach its magical 70 per cent double dose vaccination target.

“We thought that might be brought forward from the Monday or Tuesday to the Friday, so now we are just ready to pull the trigger. We will prep Wednesday, Thursday and do our Mise en place and stuff and then Friday, open the doors.” 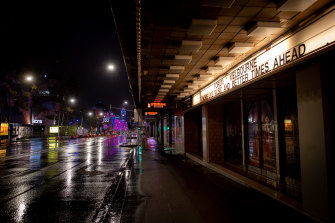 Melburnians have survived their final weekend in lockdown. Credit:Eddie Jim

“Whilst it’s not the end game, it makes a massive difference. It’s just about getting the wheels turning again and about getting Victoria going again.”

Mr Andrews said Victorians could feel proud of what they have achieved. “There’s still a little way to go, and we’ve just got to see this thing through, push on, push through, and get vaccinated so that we can hit 80 per cent and beyond, so we can open up, normalise this, and look forward to Christmas, and indeed look forward to 2022 with a justified sense of hope and optimism,” he said.

The Burnet Institute modelling, briefed to media before the announcement, predicts a much lower hospitalisation rate than once expected due to high vaccination coverage. The chances of peak hospital demand exceeding the state’s capacity have dropped from 63 per cent on September 18 to 23 per cent on Sunday.

The modelling now projects 1212 deaths between July and December – down from 2202 deaths projected on September 18.

Under the revised plan, announced on Sunday after the state recorded 1838 new local coronavirus cases and seven deaths, people will be allowed to have 10 visitors, including dependents, at their home each day.

Mr Andrews said authorities were “highly recommending” people be fully vaccinated, but acknowledged that would be difficult to police.

Families and friends across Melbourne began making plans at the news. Northcote woman Dianne Bruzzaniti said the impact of lockdowns had been hard on her family, but restrictions would ease just in time to celebrate the 18th birthday of her son Joseph, one of her three children. Joseph now plans to invite friends over, and they will be able to see family across town.

“I’m so excited to be able to entertain and to go out, and see people not just by passing them in the street,” Ms Bruzzaniti said. 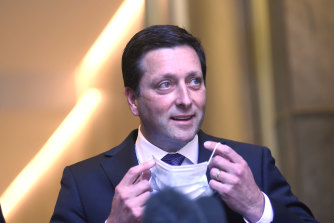 As of Sunday, 88.3 per cent of Victorians aged over 16, and 88.1 per cent of those aged over 12, had received at least one dose of the coronavirus vaccine.

“A lot of people are going to get exposed to COVID-19 in coming months as many people move around the state, as many, many people interact in all of those places that are opening up,” Professor Sutton said.

“A lot of those people will have mild illness, asymptomatic illness and you won’t know that the person you’re standing next to has COVID-19, so we really have to protect everyone.”

The opposition welcomed the government’s announcement but urged for outdoor mask rules to be scrapped, indoor retail with density limits to be permitted, and strict work-from-home orders to end on Friday.

Opposition Leader Matthew Guy said businesses need certainty and the government should commit to a date for when trade will be allowed to resume.

”Whether it’s 79.4 or 80.5 per cent vaccination doesn’t really matter – I think we’re going to get to it; that’s pretty clear and we need to have a date and stick to it,” Mr Guy said.

as, forward, Freedoms, Mel, Pushed
You may also like: