Australia will be “in the gun” in any conflict over the future of Taiwan and must accelerate its work on missiles, nuclear submarines, fuel stocks and ammunition stocks to prepare for greater pressure on national security, opposition defence spokesman Andrew Hastie has declared.

Warning of a “very bleak” strategic outlook for Australia, Hastie backed the government in its condemnation of Chinese military operations around Taiwan but called for faster action to deter threats. 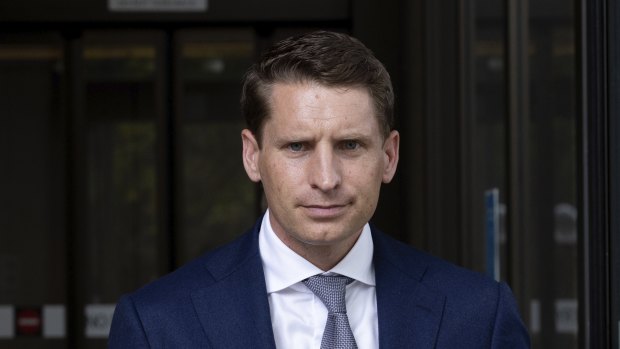 Andrew Hastie has warned of a “very bleak” strategic outlook for Australia.Credit:Brook Mitchell

“The point is that if there was a conflict around Taiwan, whether we’re involved directly or indirectly on the periphery we would certainly be in the gun,” Hastie told the ABC’s Insiders program on Sunday morning.

China has fired missiles across Taiwanese airspace into the island’s territorial waters as well as into Japan’s exclusive economic zone in recent days, triggering sharp criticism from Foreign Minister Penny Wong and her counterparts from Japan and the United States on Saturday.

The United States called the moves “a significant escalation in China’s efforts to change the status quo”.

“They are provocative, irresponsible and raise the risk of miscalculation,” a White House spokesperson said. “They are also at odds with our long-standing goal of maintaining peace and stability across the Taiwan Strait, which is what the world expects.”

The Chinese embassy in Canberra responded late on Saturday by criticising the “finger-pointing” from the three countries and claiming it was the victim in the visit to Taiwan in recent days by United States House Speaker Nancy Pelosi.

“The incidents proves it is the US to be the biggest saboteur and destabiliser of peace in the Taiwan Strait and the biggest troublemaker to regional stability,” the embassy said in a statement posted on Saturday night.

“It is the US that should be condemned. China is the victim of political provocation from the US.

“Instead of expressing sympathy and support to the victim, the Australian side has condemned the victim along with the perpetrators. This is completely putting the cart before the horse and reversing the right from the wrong.”

Hastie said it was important for Australia to talk to all sides including China and Taiwan but he emphasised the need for a stronger military to prepare for what he called a very bleak outlook.

In an important statement on bipartisan foreign policy, Hastie endorsed the One China policy that underpins the Australian stance on Taiwan’s future, but added that there were ways for Australia to support the island, including on trade.

Asked about the “strategic ambiguity” that Australia and its allies express when asked how they would respond to an attack on Taiwan, he said the stance allowed some flexibility in the response when there was a high risk of miscalculation.

“Allowing a little bit of space for both parties, or all parties involved, to give each other the benefit of the doubt is really, really important,” he said.

Hastie made no criticism of Pelosi for visiting Taiwan, saying the trip was a matter for the US, but said her visit was no different from earlier ones by similar US political representatives.

Asked if he would visit Taiwan, Hastie said he was open-minded about whether to go in the same way he had tried to visit China several years ago before the Chinese government denied his visa along with the visa of his Liberal colleague, Victorian Senator James Paterson.

With Defence Minister Richard Marles seeking a new review of defence to report by March next year, Hastie said Australia could not afford any cuts to its capabilities and had to do everything possible to hasten the delivery of nuclear-propelled submarines under the AUKUS alliance with the United States and United Kingdom.

“Whether we’re engaged in a high-intensity war or whether we’re at the periphery of one, there are certain things we absolutely need,” he said.

“We need to continue to invest in our cyber resilience.” He cited the $10 billion investment in the Australian Signals Directorate in the federal budget in May.

Asked if that meant the government should allow the US to base missiles in Australia, Hastie said the goal was to partner with the US to develop sovereign missiles that were Australian-owned and Australian-delivered if required.

While Hastie acknowledged the challenges in delivering the nuclear submarines before 2040, he said it was not impossible and cited the tactics used by then-prime minister Malcolm Fraser in 1970 over the supply of fighter aircraft from the US.

Frustrated over the terms of agreement to buy the F-111 jets, Fraser threatened to air concerns in Senate hearings in the US Congress when he and Australian officials were visiting Washington DC, a move that led US officials to agree to better terms for Australia in the contract.

He acknowledged mistakes in the Coalition’s handling of defence, given the previous government had turned to Japan and then France for a new submarine fleet before signing the AUKUS agreement, and he singled out the sale of the Port of Darwin to a Chinese government in 2015 as a mistake.