Follow
Home » Lifestyle » HENRY DEEDES: With more Brasso on his halo than ever, it's Mr Showbiz!

HENRY DEEDES: With more Brasso on his halo than ever, it's Mr Showbiz!

HENRY DEEDES: And now with more Brasso on his halo than ever… it’s Mr Showbiz!

Now here he was. Cock o’ the North. Tip-top of the heap.

Rarely, if ever, has a Chancellor’s speech at Tory conference provoked such eager rubber-necking. The queues outside the main auditorium to see Rishi yesterday were worse than those seen during the January sales. 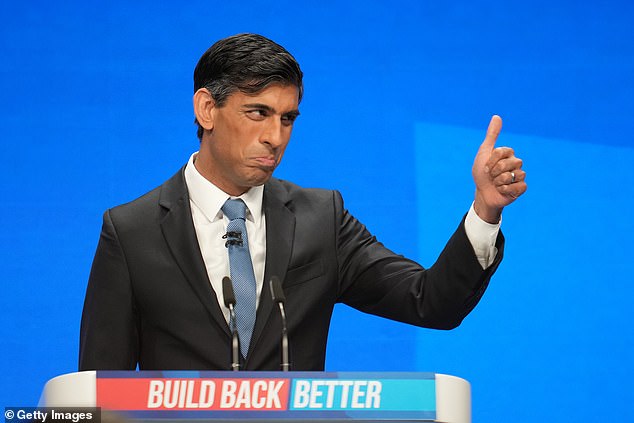 Mr Sunak was laying out a 20-minute ‘overview’ of his economic vision for the country – but, dare I say, it felt a touch more than that 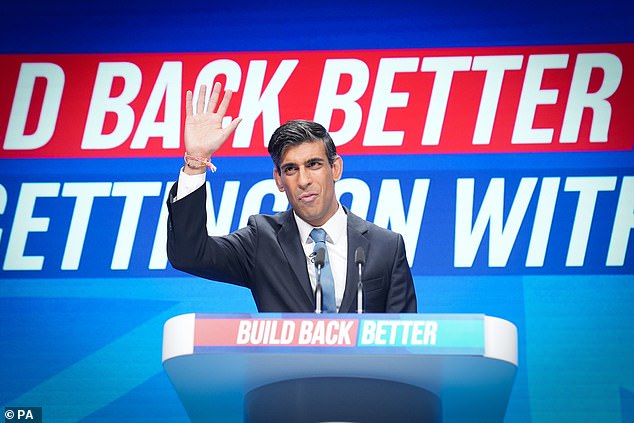 At times, Rishi admitted, it felt ‘as though the whole world was collapsing.’ Mr Relatable

It was hustle, jostle and argy-bargy galore. And those who did manage to find a seat were packed in tighter than pilchards.

Had they kipped outside overnight to secure a berth? Some rather squiffy-eyed specimens certainly looked as though they had.

One cheery old dear riding a mobility scooter was so eager for a spot she powered through the crowd like Barry Sheene negotiating a bend at Brands Hatch.

This kind of thing certainly never happened when Philip Hammond was in No11, I assure you.

Mr Sunak was laying out a 20-minute ‘overview’ of his economic vision for the country – but, dare I say, it felt a touch more than that. This was a leader-in-waiting setting out his stall while, of course, applying yet more Brasso to his already well-polished halo.

Above the lectern was a giant blue screen. For a moment I wondered if the Boy Wonder might come bursting through it. But, alas, he sauntered on stage all wavy hands – ‘Hey, how are ya? Good to see y’all!’ Mr Showbiz.

Over to his left slouched the Prime Minister, grinning gormlessly. Rishi took aim with pistol fingers and fired a few warning shots in the boss’s direction. Pop, pop, pop. He’s Mr Jokester too.

Amazing to think, but this was his first time in front of conference. Hence a fair amount of getting-to-know-me stuff.

We were reminded of how he’d barely unpacked his wash bag in Downing Street before the terrifying task of negotiating our finances through a once-in-a-lifetime global pandemic fell on his slender shoulders.

At times, Rishi admitted, it felt ‘as though the whole world was collapsing.’ Mr Relatable. But what seemed to please the audience most about this speech was that it was so unashamedly Tory.

There were shades of Mrs T as he spoke confidently of how Labour could never be ‘trusted with your money’.

He made it clear he would not borrow recklessly or pile up debt. A dig at Labour profligacy – and possibly also another warning shot to the Prime Minister against embarking on any more of his footballers’ wives-style shopping sprees. 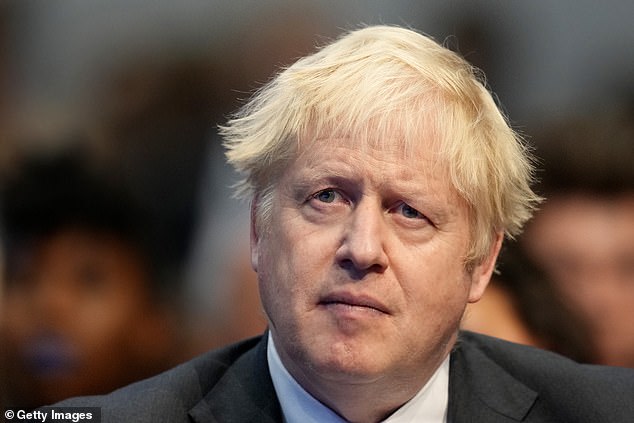 Meanwhile, Boris smiled on and ruffled his hair impatiently, a sideline substitute eager to get on the pitch and steal the glory

Down in front of the stage, rabid paps were wrestling one another to get the perfect shot of the man-of-the-hour.

One snapper was so contorted he was practically doing yoga. Meanwhile, Boris smiled on and ruffled his hair impatiently, a sideline substitute eager to get on the pitch and steal the glory. Our PM does not relish the role of voiceless onlooker.

There was a pointed moment as Rishi recalled when he had announced he would be voting for Brexit.

People had warned him it would be the end of his political career. For ‘people’ read David Cameron and George Osborne.

But voting Leave, he said, was a matter of principle. Some in the hall interpreted this as little jab at Foreign Secretary Liz Truss, who harbours her own well-guarded leadership ambitions.

La Truss, lest we forget, was originally a Remainer who had a convenient change of heart after the result.

The speech ended with bit of chest thumping intended to get the crowd whooping, but it never quite got going – hardly helped by the awful sound quality in the room, where noise pinged and echoed off the walls.

Tomorrow Boris will speak from a different auditorium. It’s far bigger, with much better acoustics. Indeed, after his next door neighbour’s show-stealing moment in the spotlight, he may feel he needs all the advantages he can get.

Brasso, DEEDES, Henry, More, With
You may also like: