There is a mesmerising quality to Khaled Sabsabi’s survey exhibition at Campbelltown Arts Centre. The sheer breadth and depth of the influences, concepts and philosophies is dizzying.

The effect is only increased as the artist explains what lies behind each of the paintings, photographs, stencils and video installations.

Entitled A Hope, it is a companion exhibition to a show presented in 2020 by the Art Gallery of NSW, A Promise. 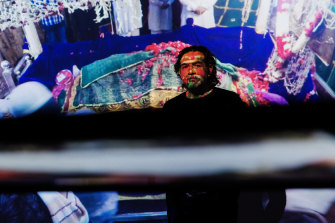 Khaled Sabsabi with one of the works in his survey exhibition, A Hope.Credit:James Brickwood

“A Hope is in essence an offering of the in-between space: the slow and unseen space where changes, like life, can pass us by without noticing,” explains Sabsabi. “Hope itself is a possibility, something that is familiar and common to us all and something that lives deep down in our humanity. It is the belief and intent of a better reality or circumstance. It sometimes embodies anxiety and fear and in other times joy and will. Regardless, hope requires patience and perseverance.”

Now 57, Sabsabi came to Australia in late 1977 from his native Lebanon, where he and his brother had been trapped by the civil war.

“These were our forming years and [the civil war] has a lot of impact on you as a person and for the rest of your life, essentially,” he says.

And while life in Auburn provided an escape from the terror of civil war, it was far from peaceful for the teenaged Sabsabi.

“You are considered different,” he says. “At that time people were less tolerant in terms of acknowledging the other so there was a lot of discrimination. There was a lot of violence and hate directed towards us because we weren’t part of the normal landscape.”

Even then Sabsabi was driven to make himself heard, and it was hip-hop that initially gave him a voice.

“Hip-hop gave me and others that were like me something of an alternative,” he says. “It sat outside the mainstream but was something you could really associate with. It’s essentially storytelling. In particular, my story with things that feel dear to me.”

Ultimately, the fascination with hip-hop led Sabsabi to make a “fluid transition” to the video installations that characterise his practice today.

A Hope consists of work spanning two decades of practice. Heavily influenced by the artist’s Sufist beliefs, it examines the relationship between the temporal and the mystical and also how the everyday can have a spiritual aspect.

Naqshbandi Greenacre Engagement is a charmingly low-key work for which Sabsabi was awarded the Blake Prize in 2011. It is made up of three screens on the floor in front of a rug. The screens show devotees of the Naqshbandi order of Sufi Muslims chanting their devotions in the decidedly unreligious setting of a Western Sydney Scout hall. Sabsabi’s message, it seems, is that the divine can be found everywhere – if only we know how to look.

In person, Sabsabi is gentle and quietly spoken, but with an urgent eloquence as he explains the concepts and thinking behind each of the works.

Towards the end of our conversation we return to the idea of the “in-between” spaces.

“I feel that nothing is black and white,” he says. “It can’t be. I think everything we do is in that in-between space. Understanding that in-between space gives you a better appreciation of the other and you’re able to get a glimpse of someone else’s reality without having that discrimination in your mind.”

I suggest all refugees and migrants are in a sense “in-between” people, but Sabsabi prefers another term.

“Let’s call us wanderers,” he says. “It’s more poetic and leaves room for the imagination.”