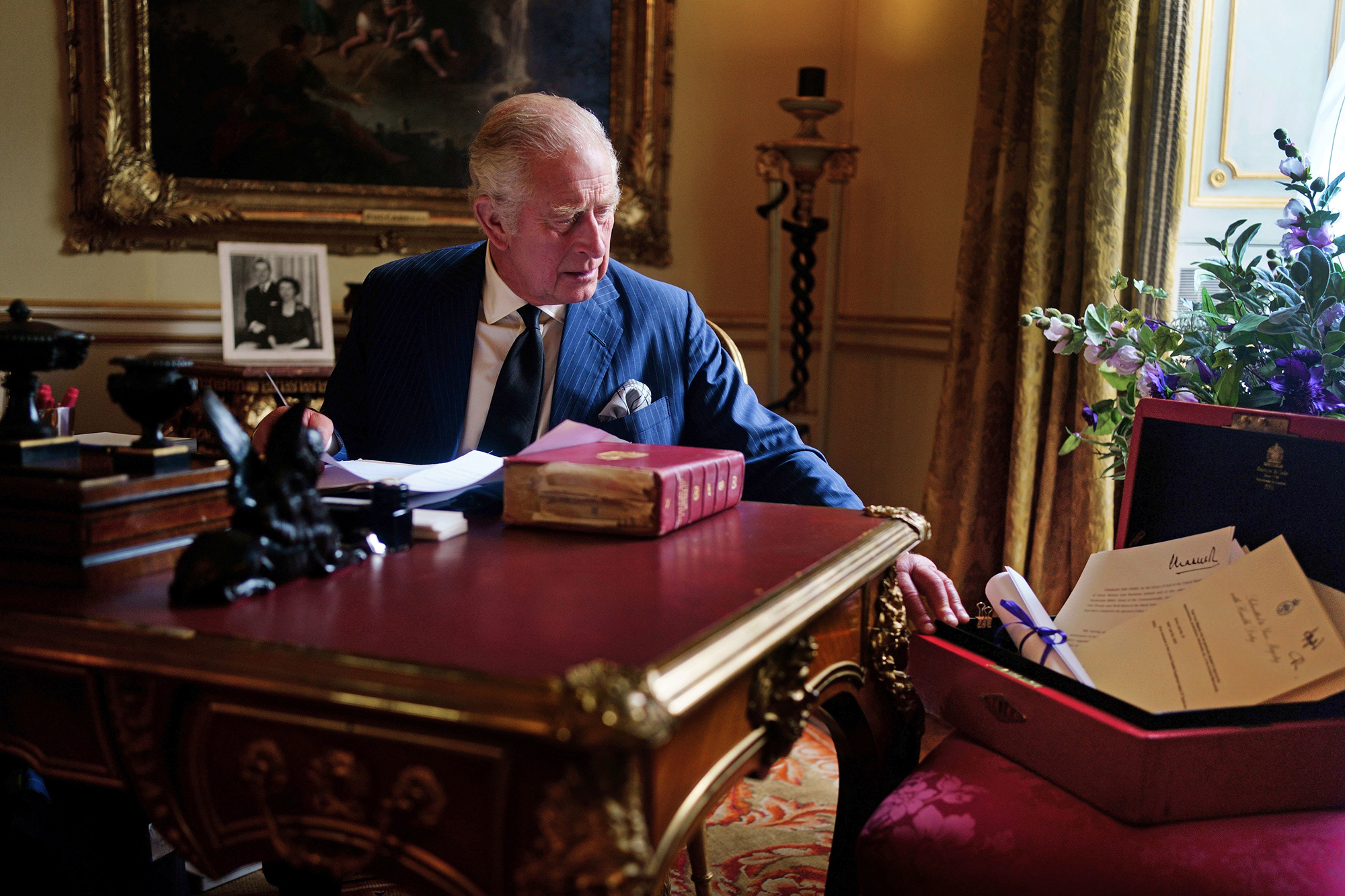 Charles in charge! After King Charles III ascended the British throne, the reigning monarch is already hard at work.

When Will Prince Charles Become King? Everything to Know

“His Majesty The King’s Red Box 🧰,” the royal family captioned a Friday, September 23, Instagram portrait of the 73-year-old king. “The Red Box contains papers from government ministers in the UK and the Realms and from representatives from the Commonwealth and beyond. The documents are sent from the Private Secretary’s Office to The King, wherever he may be in residence, in a locked red despatch box.”

Charles, who succeeded mother Queen Elizabeth II after her September 8 death at the age of 96, was photographed wearing a blue suit as he sat at his desk in Buckingham Palace. His office also featured a sweet nod to his parents: the late queen and Prince Philip. A framed portrait of Elizabeth and the Duke of Edinburgh, who died in April 2021, sat on the table behind Charles’ desk.

In the Friday photo, Charles reached into the box to receive his daily government briefings. The Red Box is a British tradition for the reigning sovereign. Elizabeth, for her part, received her own box for almost every day of her reign following her 1952 coronation. While she’d sift through the paperwork on weekdays, weekends and various holidays, Christmas Day was always off limits. 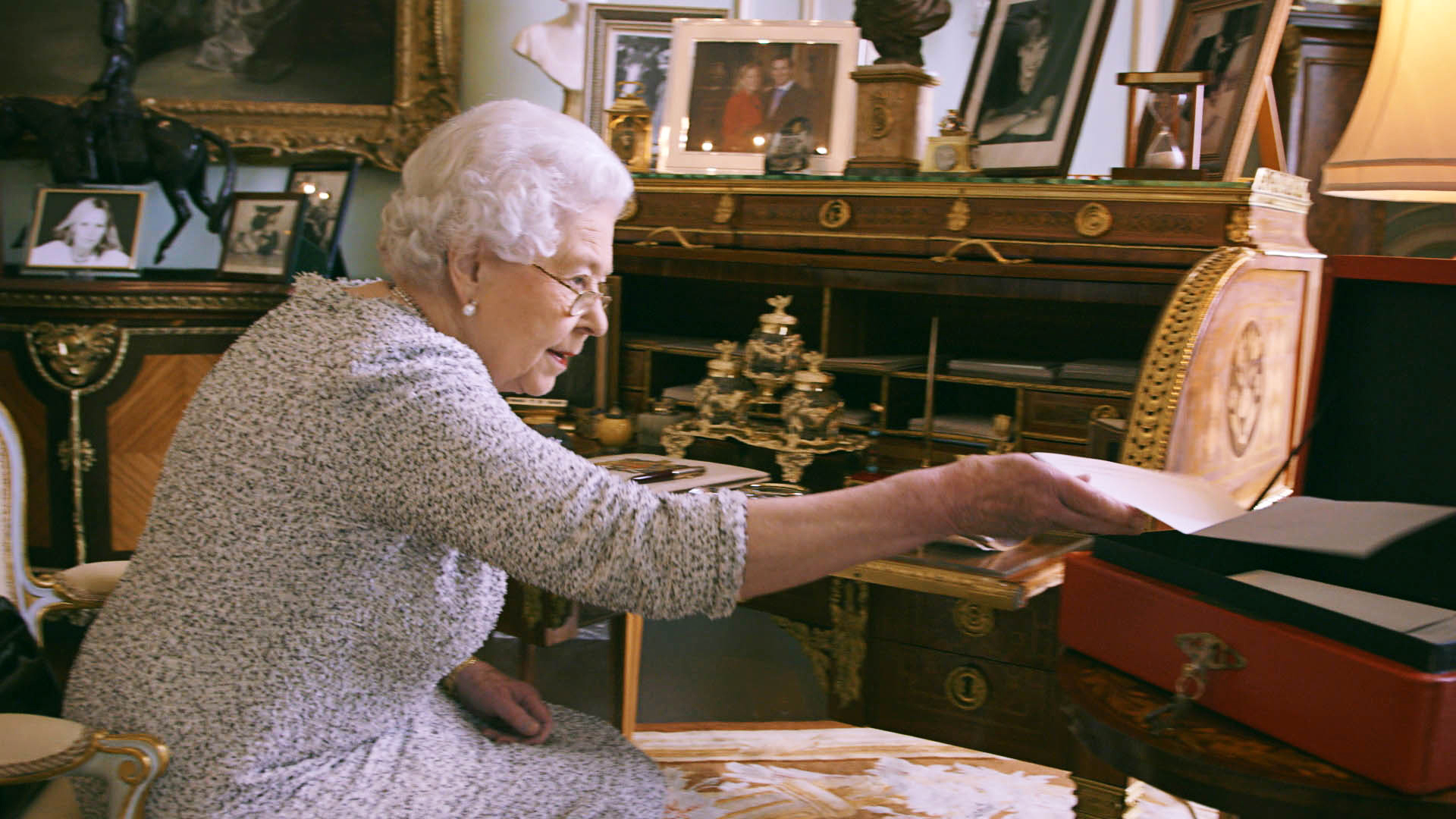 “My mother’s reign was unequaled in its duration, its dedication and its devotion,” His Majesty told the council at St. James Palace at the time. “Even as we grieve, we give thanks for this most faithful life. I am deeply aware of this great inheritance and of the duties and heavy responsibilities of sovereignty which have now passed to me.”

He continued: “In taking up these responsibilities I shall strive to follow the inspiring example I have been set in upholding constitutional government and to seek the peace, harmony and prosperity of the peoples of these Islands, and of the Commonwealth Realms and Territories across the world. In this purpose, I know that I shall be upheld by the affection and loyalty of the peoples whose sovereign I have been called upon to be, and in the discharge of these duties, I will be guided by the council of their elected parliaments.”

Charles, his two sons and his three siblings even marched in procession behind the queen’s casket on Monday, in which the king picked out a floral wreath to lay on top. He also wrote a note for his mother, which read, “In loving and devoted memory,” alongside his regal signature of Charles R.

“I think the letter was a poignant moment and I think it reminds us that Charles is grieving for his mother,” royal expert Myko Clelland exclusively told Us Weekly at the time. “Anyone who’s lost a parent can maybe sympathize. It must be incredibly difficult.”

The genealogist added: “I think [he had pride for] his mother and the great things she’s done, and I can imagine it’s probably quite daunting to step into such big shoes, but Charles has had a lot of preparation. All of these things — these chances to say goodbye — I think they bring an incredible amount of closure and they do help in this process. I think all of those little touches are important for Charles as well as for the nation.”