Follow
Home » Lifestyle » Labor failed to pick up anything in Queensland, but it’s not all bad news for Albo

On the face of it, Labor did not do too well in Queensland. 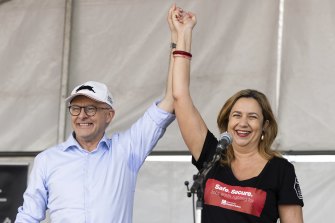 Peter Dutton is now the clear frontrunner to lead the Opposition from his north Brisbane seat, which would leave no doubt that Queensland is Coalition heartland.

But dig a little deeper, and it’s not such bad news for Prime Minister-elect Anthony Albanese.

The 2019 disaster put most of Queensland out of Labor’s reach. Next election, many more LNP seats will be in play.

Not only that, but Labor’s marginal seats of Blair and Lilley can now be firmly put in the “safe” column.

Lilley’s Anika Wells went into the election with a razor-thin majority of 0.62 per cent. When counting is done in the coming days or weeks, a margin of more than 10 per cent looks likely.

Previously safe, or safe-ish, LNP-held seats are also now in play on a two-party preferred bases. Bonner, Bowman, Capricornia, Dickson, Flynn, Forde, Leichhardt and Petrie all had big swings to Labor that put them within reach.

Longman, which did not experience such a swing to Labor, as always remains in play.

And Labor remains confident of seeing off the Greens to claim Brisbane from the LNP’s Trevor Evans, who has already conceded defeat.

While the Greens’s Stephen Bates was ahead on the primary vote on Sunday, senior Labor sources were confident their candidate, Madonna Jarrett, would pull ahead once postal votes were counted.

Those same senior Labor sources also told this masthead the mood at Queensland Labor HQ was jubilant, despite the lack of a net gain in the state.

“You’d rather be us than them,” one said. “We’ll be in government.”

Both Labor and the LNP use their access to the electoral role to cultivate postal votes. The Greens have no such operation.

In an election that saw both major parties bleed votes, Queensland joined Western Australia and the ACT as the only states or territories that saw an increase in Labor’s primary vote.

All that means there will be plenty to play for in Queensland when Prime Minister Anthony Albanese calls the next election.

Of course, it’s not all good news for Queensland Labor.

The loss of Griffith’s Terri Butler to the Greens is a devastating blow, with many in and outside the party seeing her as a potential future Labor leader.

“You’d expect the states that delivered government to be rewarded,” said one Labor source.

“So you’d be looking at Western Australia and Victoria.”

Queensland will have to be content, for now, with the most influential ministry of them all and, in all likelihood, the opposition leader.

All that, combined with the Greens’ meteoric rise, may yet see Queensland regain its traditional role as the centre of the Australian political universe.