While Glastonbury may be over for another year, it appears many blue-blooded socialites have keep left reminiscing about the fun of the festival this week.

Glastonbury opened its gates at Worthy Farm in Somerset for the first time in three years last week, with royals including Princess Beatrice and the Duke of Kent’s granddaughters Lady Amelia and Lady Marina Windsor in attendance.

And now many of the socialites have taken to Instagram to share their highlights from the event – from dancing in the crowd to donning skimpy outfits around the campsite.

Lady Amelia, the 26-year-old granddaughter of Prince Edward, Duke of Kent, who is the Queen’s cousin, led the aristocrats at the music festival, which she boasted about to her 97k Instagram followers. 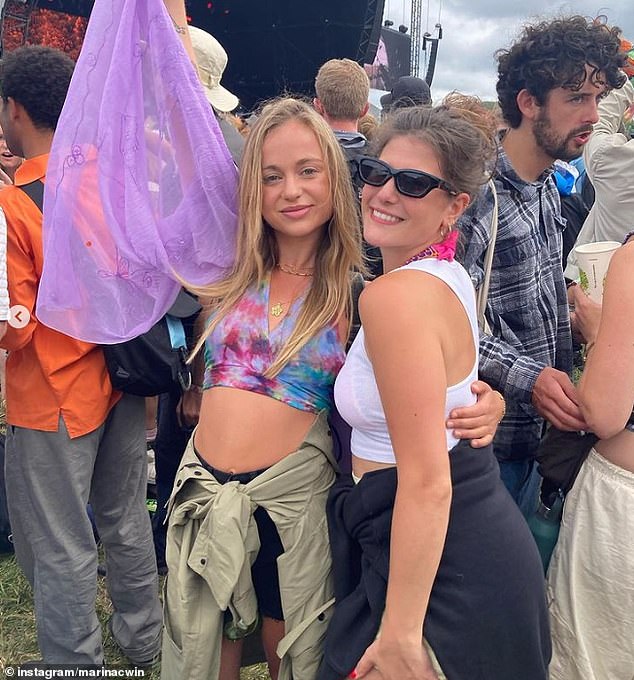 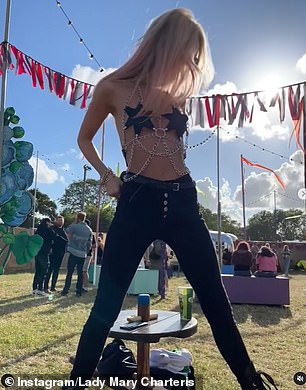 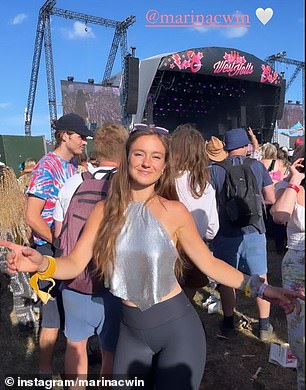 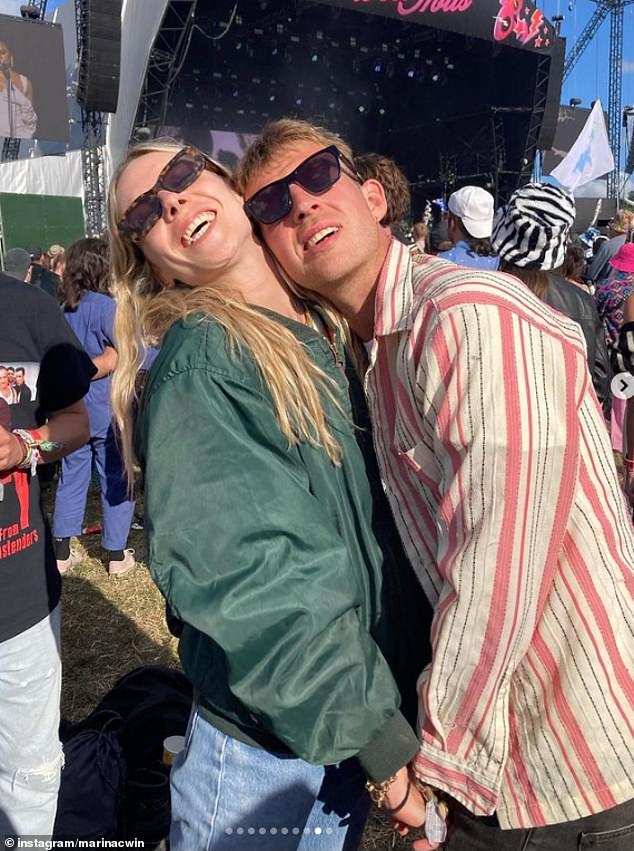 The Edinburgh University graduate is a contributing editor of Tatler and has previously appeared in the pages of the society bible.

In the past, she has also modelled for the likes of Dolce & Gabbana and designed her own range of accessories in collaboration with Penelope Chilvers.

Along with her sister Lady Marina, she shared a number of snaps and videos from the big event.

The royal party girls posed in the crowd in skimpy outfits, as well as snapping pictures in front of a huge pair of rainbow coloured wings. 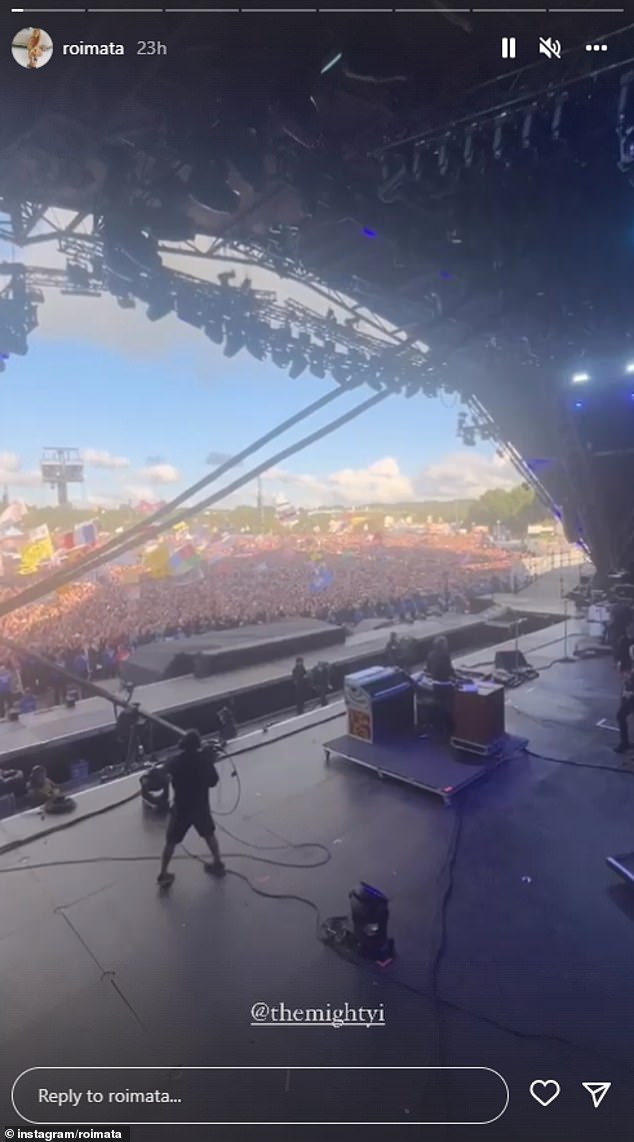 Others, like Victoria Secret model Jessica Clarke, shared a glimpse at the view from the side of the stage out into the crowd 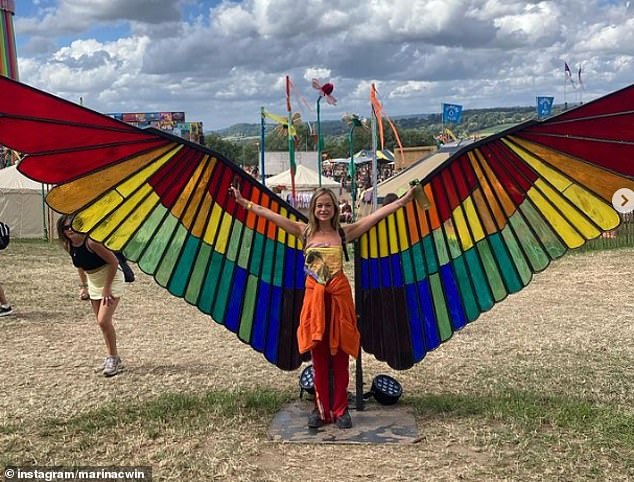 Lady Amelia led the aristocrats at the music festival, which she boasted about to her 97k Instagram followers 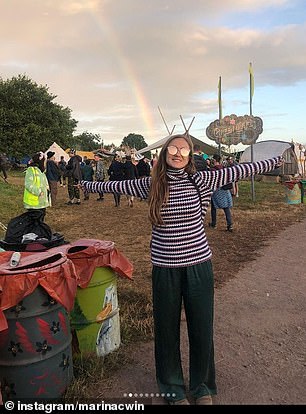 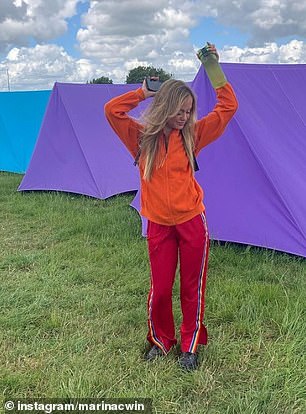 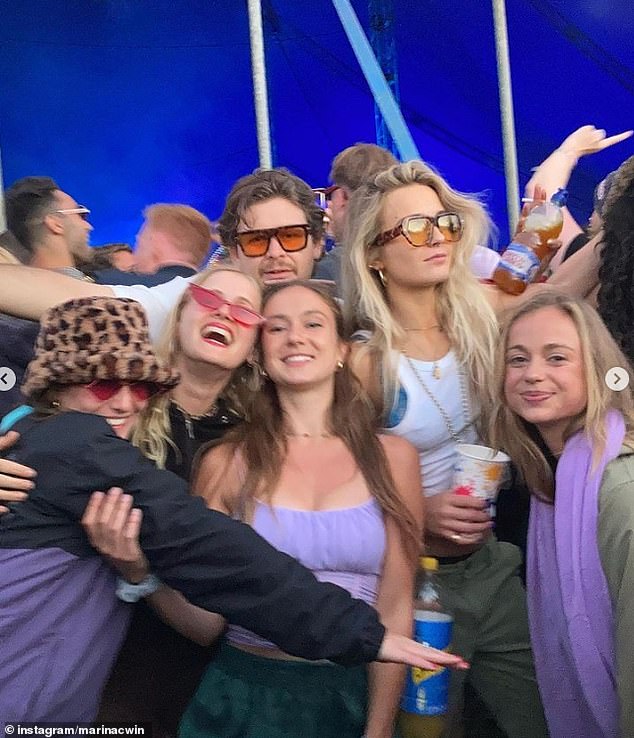 Newlywed Octavia Calthorpe joined the sisters at the event alongside her new husband Oliver Feather.

They were joined at the festival by Lady Mary Charteris, who is the DJ daughter of James Charteris, Earl of Wemyss and March and Catherine Ingrid Guinness.

She opted for a daring chainmail style top for the festival, with a pair of black leather nipple covers barely protecting her modesty at the event.

The singer and model, 33, welcomed her daughter Wilde Jessie Furze, on 21 May last year, with her husband Jessie Furze, star of electronic rock The Big Pink. 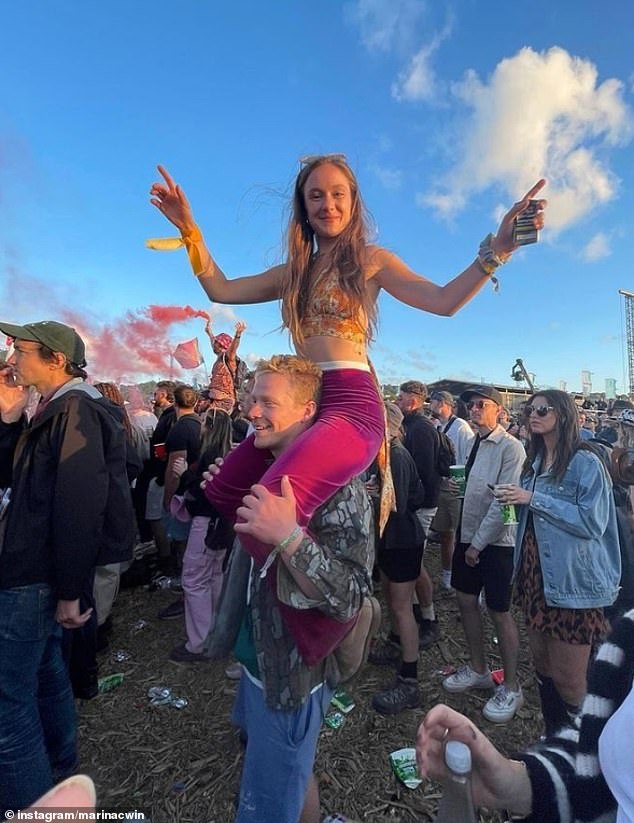 At one stage during an afternoon set, Lady Marina climbed onto another friends shoulders as she watched a band perform 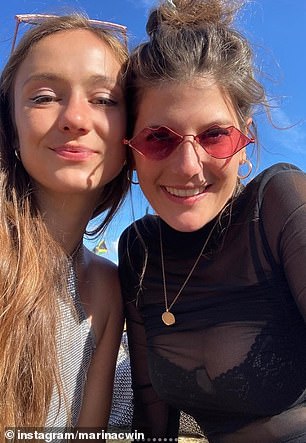 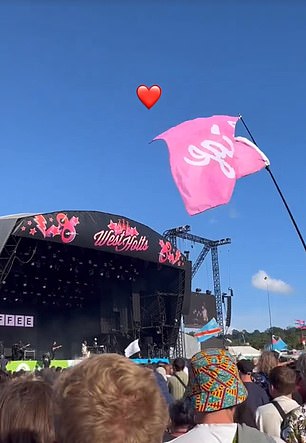 It is unknown if Wilde joined the couple at the festival, with Lady Mary posing for snaps alongside groups of girlfriends at the big day.

Among those who were in Lady Mary’s gang was model and actress Lady Clara Paget, who is BFFs with Cara Delevingne and the daughter of the 8th Marquess of Anglesey.

The actress, who is currently expecting her first baby with her husband Burberry model Oscar Tuttiett, donned a series of crop tops to reveal her pregnancy bump during the festival.

In snaps and videos shared online, she danced around in a furry bucket hat with her belly on full display while joining crowds of friends for a boogie. 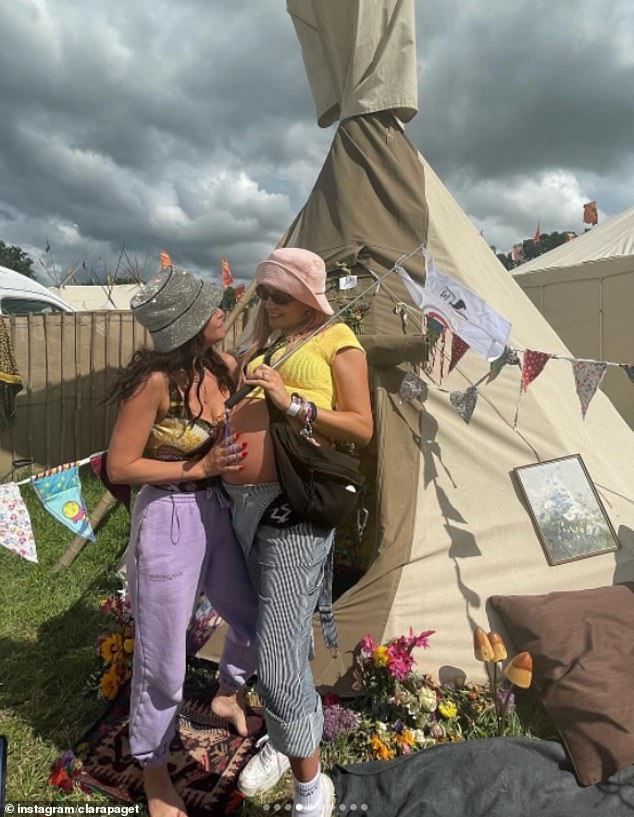 Among those who were in Lady Mary’s gang was model and actress Lady Clara Paget, who is BFFs with Cara Delevingne and the daughter of the 8th Marquess of Anglesey (pictured) 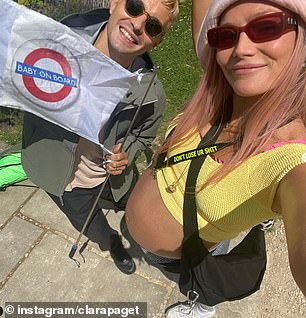 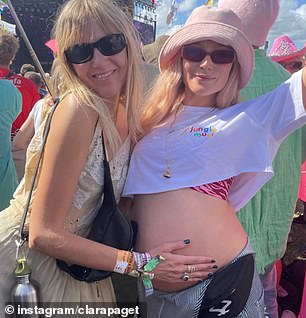 The actress, who is currently expecting her first baby with her husband Burberry model Oscar Tuttiett, donned a series of crop tops to reveal her pregnancy bump during the festival (left and right)

Meanwhile Christabel Reed and Jessica Clarke were also in attendance.

Princess Beatrice was also snapped at the festival, attending the event on Friday with headliner Billie Eilish.

On Sunday, she put on a cosy display with her husband Edoardo Mapelli Mozzi as the couple stepped out.

It is not known whether the couple brought their daughter, nine-month-old Sienna Elizabeth Mapelli Mozzi, with them to the festival at Worthy Farm. 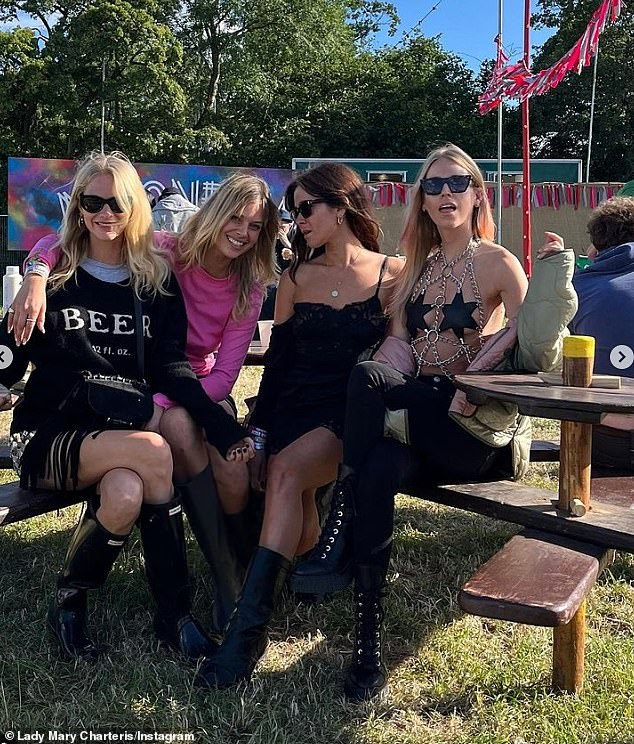 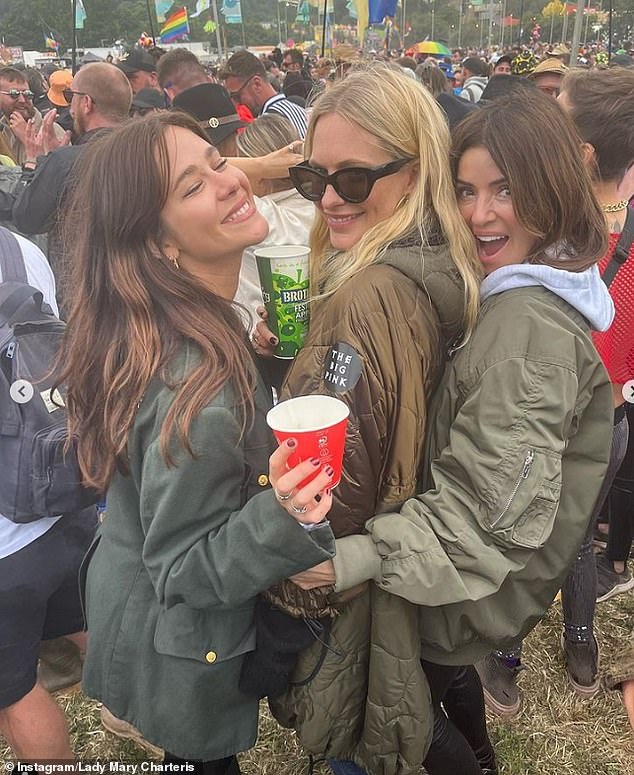 Thousands of fans descended onto Glastonbury festival for the first time since the coronavirus pandemic last week.

On Friday, Saturday and Sunday the headline acts closed each evening in turn with a slot on the Pyramid Stage. There was also a headlining Legends slot, which was scheduled for Sunday teatime.

Billie Eilish, Sir Paul McCartney and Kendrick Lamar were among the headliners who took to the iconic stage.