The Bootleg Fire in Oregon, which has ruined more than 150 structures and displaced thousands of people, is so big that officials say it may not be fully extinguished until November.

As of Wednesday morning, the massive blaze in southern Oregon ― currently the largest wildfire burning in the country ― has consumed nearly 400,000 acres, a 625 square-mile swath of land comparable in size to half of Rhode Island. Just 32% of the fire is contained.

The fire is so large that it’s spawning pyrocumulous clouds, super-heated columns of smoke and ash that can reach up to 6 miles high and generate their own lightning and strong winds. Those, in turn, can ignite and spread other fires, creating a destructive cycle.

“Normally, the weather predicts what the fire will do,” Oregon Department of Forestry spokesperson Marcus Kauffman told CNN on Tuesday. “In this case, the fire is predicting what the weather will do.”

Fire officials said Wednesday that lightning or some other natural cause likely ignited the massive fire on July 6, which expanded aggressively thanks to a combination of gusty winds and critically dry fuel. An unprecedented heatwave in late June left 90% of the state in exceptional, extreme or severe drought conditions. The National Oceanic and Atmospheric Administration concluded the heatwave would have been “virtually impossible” without climate change.

PNW Incident Management Commander Rob Allen warned Tuesday that the fight would be “a marathon, not a sprint.”

“We’re in this for as long as it takes to safely confine this monster,” he said.

The fire may not be fully extinguished until widespread moisture falls over the area in late October or November, firefighting official Katy O’Hara told The Washington Post.

No one has died so far, according to The Associated Press.

However, at least 70 homes and 100 outbuildings have so far been destroyed, with some 2,000 homes evacuated and another 5,000 threatened. (In slightly better news, firefighters confirmed to The Oregonian that a monument to the only U.S. mainland casualties from enemy action in World War II has survived.) 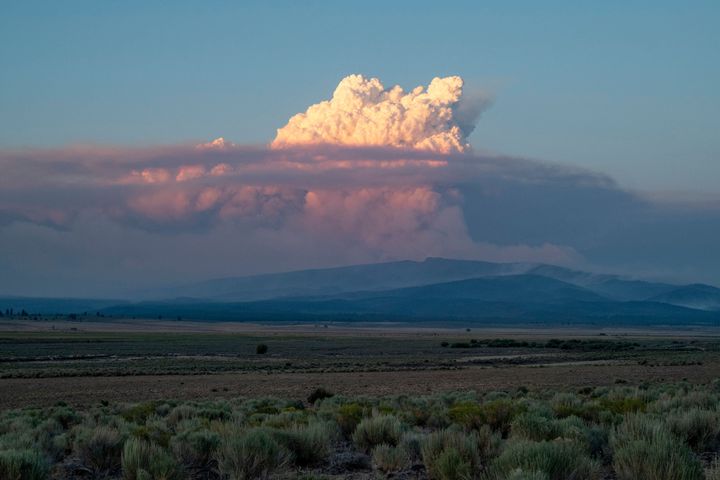 “There’s absolutely no question that climate change is playing out before our eyes,” Oregon Gov. Kate Brown (D) said at a news conference Tuesday. “We saw the heat dome event a few weeks ago. We unfortunately lost a lot of Oregonians through that event. In February we saw devastating ice storms. Over a half a million people lost power last fall, as you are well aware. We had unprecedented wildfires.”

“It’s incredibly important that we … tackle climate change, from reducing our reliance on fossil fuels to making sure that we transition to clean energy as quickly as possible,” Brown added.

Almost 80 large fires are currently burning across the American West. They have destroyed more than 1.3 million acres of land, a 2,031 square-mile area bigger than the state of Delaware. Smoke from those fires even darkened the skies of New York City — about 2,000 miles away — on Tuesday.