January 27 is the deadliest day in Australia for heat-related deaths, with heatwaves posing a greater threat to mortality than any other natural hazard including bushfires and floods. 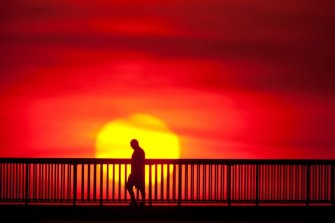 Heatwaves cause more deaths than any other weather event.Credit:Glenn Campbell

There have been more than 4500 deaths caused by periods of extreme heat since 1900, more than the total of other natural disasters combined, according to new statistical findings from risk industry analysts Risk Frontiers.

These numbers will grow as climate change fuels more frequent and intense heatwaves.

The people most at risk of dying due to extreme heat are the elderly and those from a lower socioeconomic background.

For reasons that are not yet fully understood, most deaths have occurred on January 27, the day after Australia’s national public holiday, Risk Frontiers general manager Andrew Gissing said.

“One hypothesis could be that people are active and out and about on the 26th and suffered heat-related illness on the 27th,” Mr Gissing said.

“Another interesting finding is that people weren’t really doing much shortly before they died. They might be sitting on their couch or sleeping: business as usual,” he said. 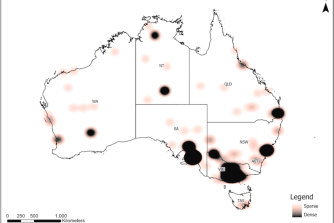 Heatwave incident locations in Australia between 2001 and 2018.

New analysis of Australian coronial records relating to heatwave deaths between 2000 and 2018 found there were 473 deaths reported that were explicitly heat-related, of which 354 occurred during heatwave conditions. This research was published in the International Journal of Disaster Risk Reduction this month.

Almost all the 354 deaths occurred during two occasions: the 2009 heatwave that preceded the Black Saturday bushfires and an extreme heatwave in Victoria and South Australia in 2014.

The Bureau of Meteorology defines a heatwave as three or more days in a row when both daytime and night-time temperatures are unusually high.

Mr Gissing said the real figure was likely to be much higher than coronial records show, with people dying of heart attack or stroke, for example, that had been related to stress caused by high temperatures.

Men have a higher mortality rate during heatwaves than women. And those most at risk include the elderly – particularly those over 70 – and people who are socioeconomically disadvantaged, unable to easily access health services, have a physical or mental disability, are socially isolated or don’t have access to air conditioning.

Most of the fatalities that occurred indoors happened in older houses, highlighting the need for governments to find inexpensive ways to support people living in public housing or renting to adapt their homes to extreme heat.

Perth and parts of Western Australia have sweltered through a recent heatwave, with six consecutive days over 40 degrees, while this week Victoria has experienced a low-intensity heatwave, with a sustained period of above-average temperatures and warm nights.

If you live in low income in public housing, or have a disability, it’s more difficult to escape the heat, said head of the Victorian Council of Social Services Emma King.

Installing rooftop solar on all suitable public housing properties would be a good first step, allowing tenants to use their air conditioning for longer periods, she said.

Recent recording-breaking hot days were a clear health hazard, said board of member of Doctors for the Environment Australia Dr John Iser. “Some of these hot days are unlivable days, we have temperatures in central and north-western Australia that are over 50 degrees.”

Earlier this month, data found the past seven years had been the seven warmest on record despite the La Nina weather pattern. The report showed the world has already warmed between 1.1 and 1.3 degrees above pre-industrial levels.

Mr Gissing urged people to check on older or isolated people in their community during a heatwave, and invite them to spend time in a cooler house.

“Heatwaves are as much of a social hazard as anything else,” he said. “These deaths are highly preventable if we all look out for each other”.