Follow
Home » Lifestyle » Me Too founder, Tarana Burke: ‘My husband was the first person I told about the sexual assault’

Tarana Burke is an activist best known for founding the Me Too movement. The 49-year-old opens up about becoming a young mum, telling her husband about her sexual assault, and meeting Barack Obama. 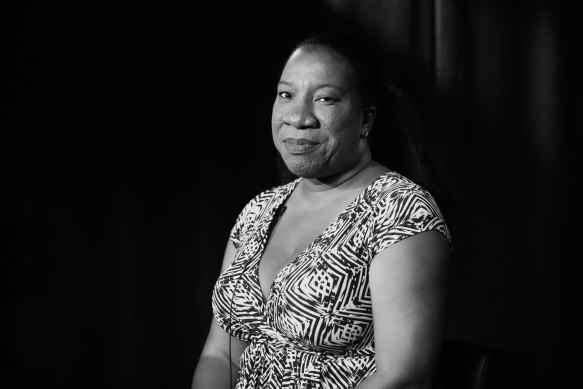 “My husband was the first person I told about the sexual assault that happened to me as a seven-year-old. He created a space for me to feel safe.”Credit:AP

My maternal grandfather, Joseph Burke, was small in stature but larger than life. He was tough and firm and wasn’t somebody to be played with. I spent a lot of time with my grandparents when I was younger. I am the first grandchild and was the apple of my granddaddy’s eye. He passed in April 1993. It was a devastating loss.

My granddaddy worked for General Motors for 37 years. When I was a little girl, he took my chocolate candy to sell to workers on his assembly line just so I could win the prize at my school for most chocolate sold. He also taught me the song Little Bunny Foo Foo. To see this man with a deep voice and serious nature getting down with me to sing was everything to me as a six-year-old.

My father [her stepfather], Wesley Thompson, was 20 years older than my mom. He was closer to my grandfather’s age and was a giant at 6 feet 4 [193 centimetres]. He was very protective of me, and used to compete with my granddaddy over who could spoil me more as a kid – a wonderful situation to be in. He was a self-taught chef. To me, he was a big gentle teddy bear. It was nothing but piggyback rides as a child.

I didn’t understand the age difference between him and Mom when I was younger. I saw them as equals. They loved to do community work together and to host block parties. They were a dynamic duo.

I have one brother, Malcolm, who was born premature when I was 13. He was a tiny baby. There wasn’t sibling rivalry between us – I was like another mother to him growing up. He was six when I left home for college. He now has four children of his own and lives in New York. We talk every day.

My daughter’s father was my first love. We dated through high school and college. I was 23 when I got pregnant. Our daughter, Kaia, is 24. I felt mature enough to become a mom, and was with her dad for years, but the pregnancy wasn’t planned.

I met my husband in 1990. He is eight years older than me and lived in my neighbourhood [New York’s Bronx]. I wasn’t interested in him at the time. He told me when I was 17 that we would get married. I said, “That’s not possible.” We got married in 2020.

My husband is a little old-school and traditional, so marriage was very important to him. I love him and wanted to be in a partnership with him. That could have looked a number of ways, but I appreciate marriage now way more than I did. My husband was the first person I told about the sexual assault that happened to me as a seven-year-old. He created a space for me to feel safe.

My husband was the first person I told about the sexual assault that happened to me as a seven-year-old.

Me Too holds a monumental place in pop culture and culture in general. The movement has been heavily influenced by social media and mainstream media coverage focusing on celebrities and celebrity culture and individual cases of sexual assault. That is a big concern because if we continue in that fashion, then we lose ground in our fight to make sure sexual assault survivors get justice.

Me Too includes women, men’s voices and people on the gender spectrum; when we speak collectively, we speak in one voice. There is so much power and we don’t have to look for power outside of ourselves.

I met Barack Obama on the campaign trail in 2015. He was pushing his way into the hearts and minds of American citizens and I was enamoured of his presence and poise, and of him as a person. He delivered a speech at Edmund Pettus Bridge in Selma, Alabama, to mark the 50th anniversary of the 1965 Selma to Montgomery marches. He wouldn’t let the event start until somebody found activist Joanne Bland, who was there in 1965 during the “Bloody Sunday” march.