Mother of missing British hiker Esther Dingley, who vanished in November in the Pyrenees, says it’s ‘painful’ staying in the village where her daughter was based – as her boyfriend reveals he’s walked 700 miles trying to find her

The mother of a British hiker who went missing while trailing the Pyrenees has revealed the trauma of staying in the village where her daughter was last based, as the hunt for her goes on.

Oxford graduate Esther Dingley, 37, vanished in the Pyrenees on November 22, near Pico Salvaguardia, between France and Spain.

Her boyfriend of 20 years Dan Colegate, 38, who was the last person to talk to her via text messages, is still looking for her seven months on, after the initial searches for the British citizen were halted by thick snow.

Her mother, Ria Bryant, 74, has relocated to the Spanish village of Benasque, where Esther stayed before her disappearance.

Speaking to the Sunday Times Magazine, Ria said she found living in the village ‘painful.’ 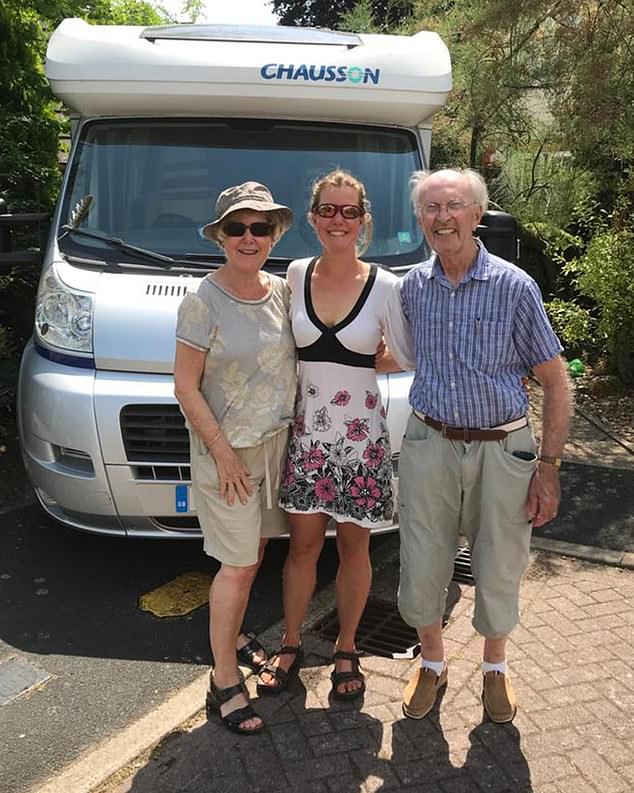 Ria Bryant, 74, the mother of Oxford graduate Esther Dingley, 37, who vanished in the Pyrenees on November 22 2020, said she found it ‘painful’ to stay in the village where her daughter last stayed before her disappearance (Ria, pictured in June 2020 with Esther, and her partner Terry)

‘I find it quite painful being here. I do not seem to be able to sleep but I want to go to the place where they find her,’ Ria said.

Ria last saw Esther in the summer of 2020, and said she didn’t feel strong enough to go and look for Esther with Dan in the mountain range where Esther was last located.

Esther was expected to spend the night in an unmanned shelter on the French side of the border on the day of her last conversation with her boyfriend but it is not known if she ever arrived.

They spoke after she reached the summit of Pico Salvaguardia, which the French call Pic de Sauvegarde, for the second time in two days.

She was seen by several witnesses including an Olympic Spanish skier asking for some fruit hiking on the path leading up to the summit and appears to never have made it to the unmanned shelter she was heading for.

Esther’s mum admitted in February: ‘Each day has been nothing short of an excruciating hell for me, balancing on the edge of breaking down.

‘Not knowing where she is or what has happened to our beautiful Esther is destroying me and our family.’ 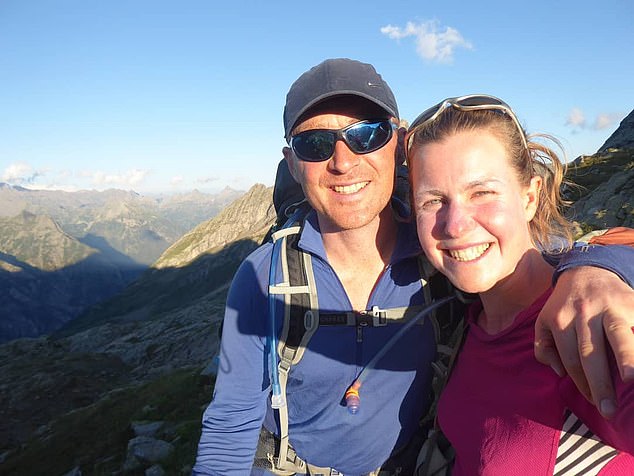 Esther’s boyfriend of nearly 20 years Dan Colegate, 38, pictured, is still trailing the Pyrenees in hopes of finding her 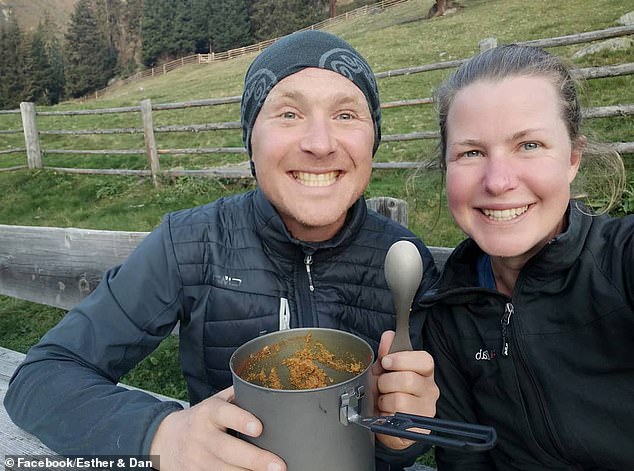 The couple had been staying at a village in Benasque, on the Spanish side of the Pyrenees, when Esther didn’t return from a trail in the mountains, prompting Dan to contact the local authorities

On Facebook this week, Colegate wrote on the couple’s shared Facebook page: ‘I have continued to search these past months as well, zig-zagging across the mountainsides surrounding Esther’s last known location and her known route.

‘I’ve walked about 700 miles now and also found no sign of her. I will continue to expand my search in the weeks and months ahead.’

The first search began shortly after Esther was reported missing by Colegate, in November 2020.

However, this search had to be halted due to thick layers of snow covering the trail for much of the spring months. After the snow melted the search resumed in June. 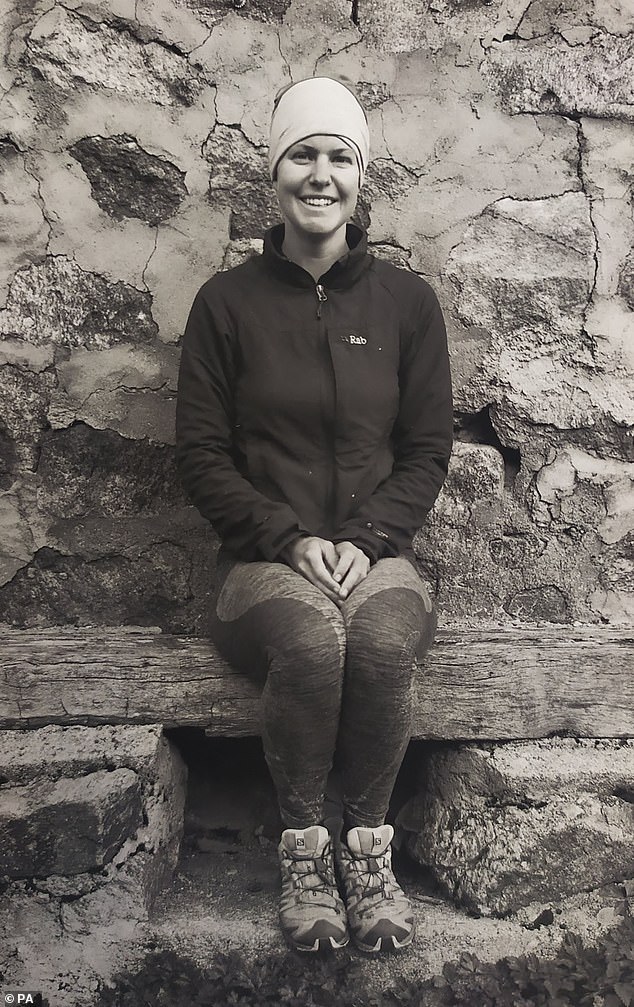 Esther, pictured has not been seen since vanishing during a train in the Pyrenees on November 22. A search for the hiker was halted for several months in December due to the weather conditions 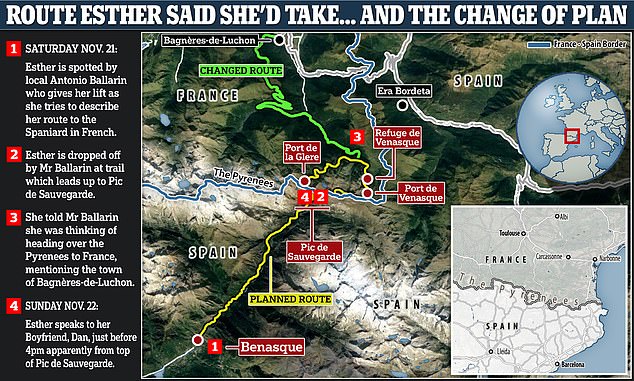 Speaking to the Times, Dan said he felt ‘in limbo,’ as he kept pushing to find Esther.

‘It’s very difficult to process something when you don’t know what’s happened,’ he said.

Dingley had hiked in the Pyrenees before, and according to Dan, she would have been very comfortable on the trail.

‘It doesn’t mean she couldn’t have slipped but if she slipped, where is she? That’s what I can’t get my head around,’ he said.

As Esther’s partner, Dan was one of the first suspects in the case of her disappearance, and he said the police went through all of his belongings and the home where Esther and him had been staying after her disappearance.

However, it was quickly established he hadn’t left the village on the day Esther went missing. 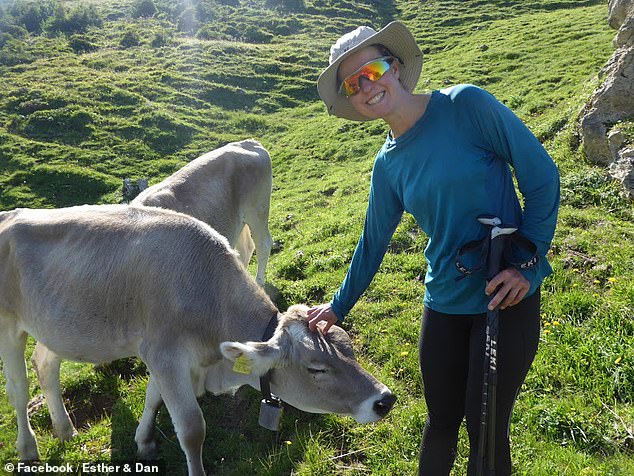 Esther, pictured, would have been comfortable on that route, Dan said, admitted it didn’t mean she couldn’t have slipped 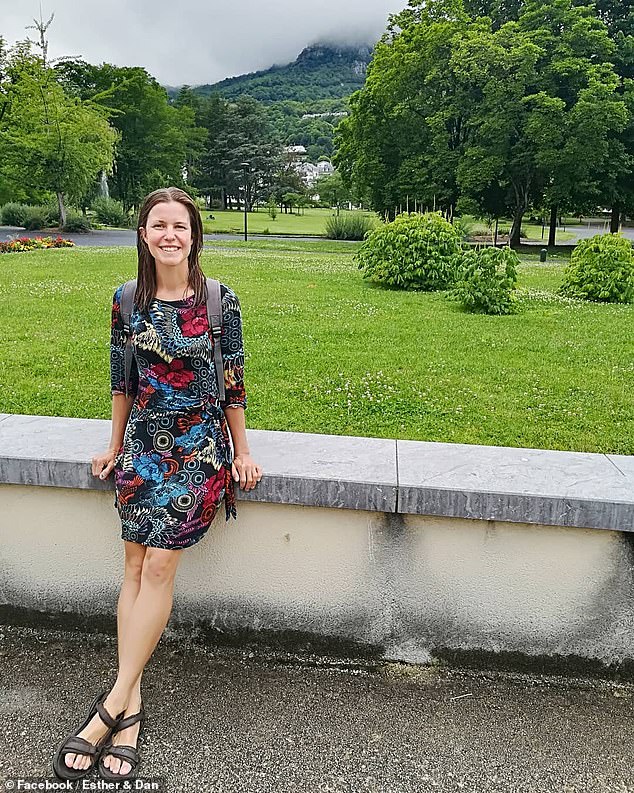 The Oxford graduate, pictured, was last seen asking for fruit on the trail in the afternoon of 22 November

The couple had one last FaceTime call on November 22 when Esther said to Dan she was excited to return in three days.

When she didn’t show up on November 25, he contacted local authorities and reported her missing.

Esther’s last message to Dan was ‘Hoping refuge Venasque has a winter room, Keep you posted when can. Love you.’

He is unsure whether she ever read his response: ‘Love you very much my angel x’ and ‘imagining you safe and warm somewhere beautiful.’

Among the locals, some seem to believe Esther could have chosen to disappear to start a new life somewhere in France or in Spain, but Ria and Dan said this was unfathomable. 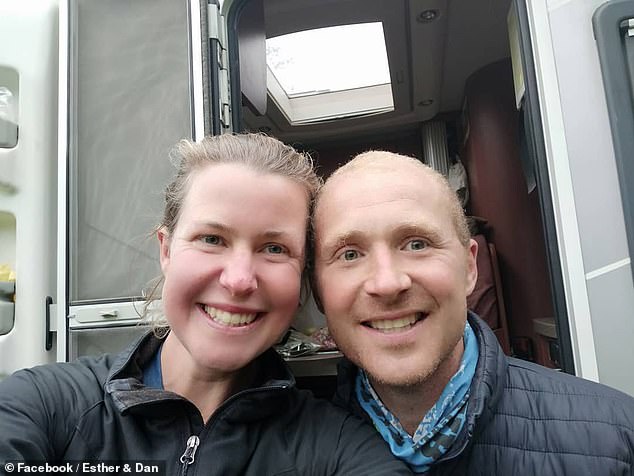 Dan, pictured, has been looking for Esther in the Pyrenees ever since she went missing. He was investigated twice by police in the case of her disappearance, but said he was never a suspect 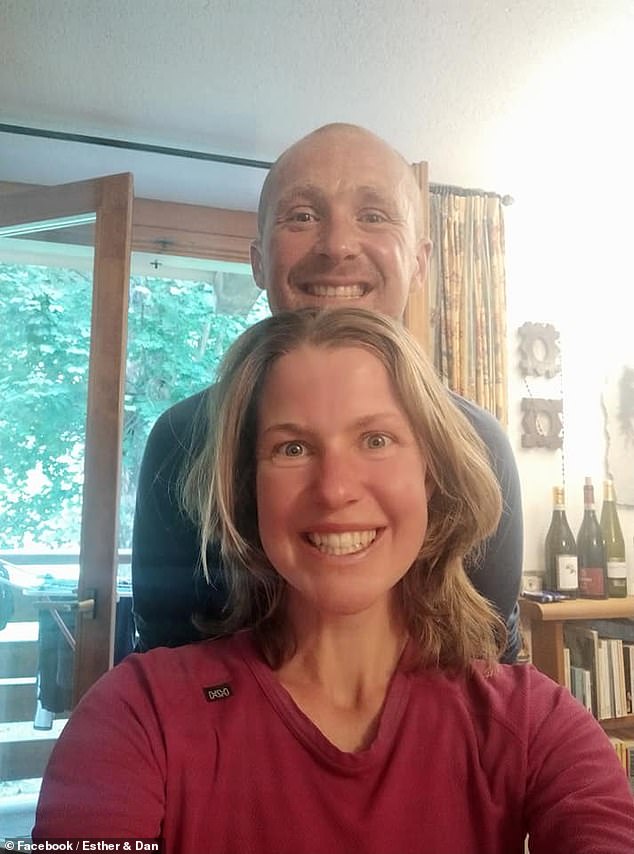 The couple, who have been dating since their late teens, exchanged texts messages shortly before Esther, pictured, went missing

‘She wasn’t only my daughter, she was my best friend. We’ve always had a very open relationship, we share even the most private things,’ Ria said.

She also said she was always struck by how well Dan and her daughter got on.

Dan said it wouldn’t be in Esther’s character to prompt an international search across the mountains just because she wanted to go off-grid, and said that if she wanted time to herself, she needed only say the word.

He also said that Esther, who had suffered from depression in the past, wouldn’t have taken her own life at a time where she was happy and had life ahead of her.

The couple took off from their Durham home in 2014 and had bought a camper van, living on the road in France. 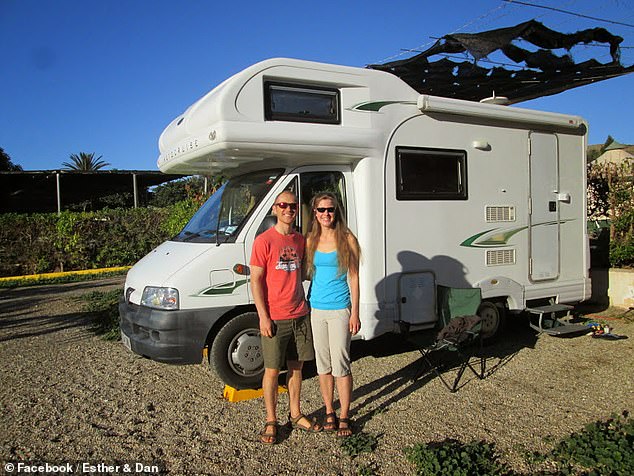 The couple pictured in front of the camper van they  bought in 2014. Dan said he couldn’t imagine the future without Esther 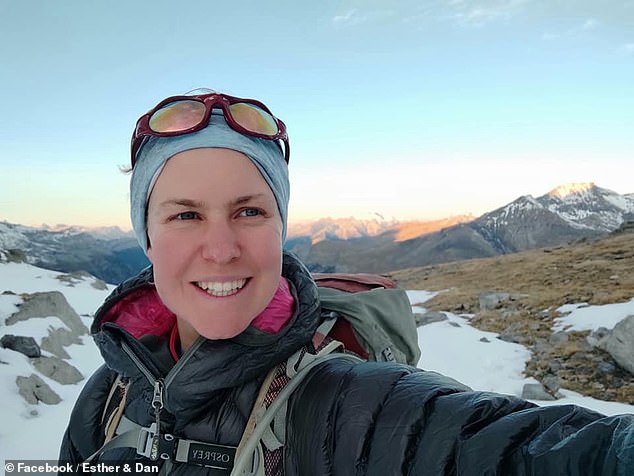 Esther, pictured, accepted a lift from an unknown man to her camper van three days before going missing 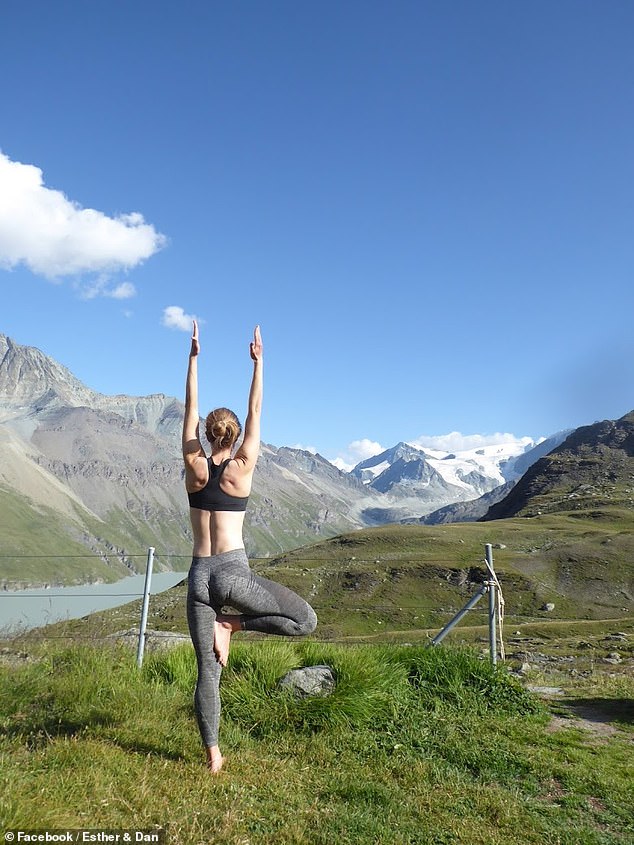 The yoga afficionado recounted her meeting with the unidentified man on her blog. Police were looking for him as part of their investigation into her disappearance 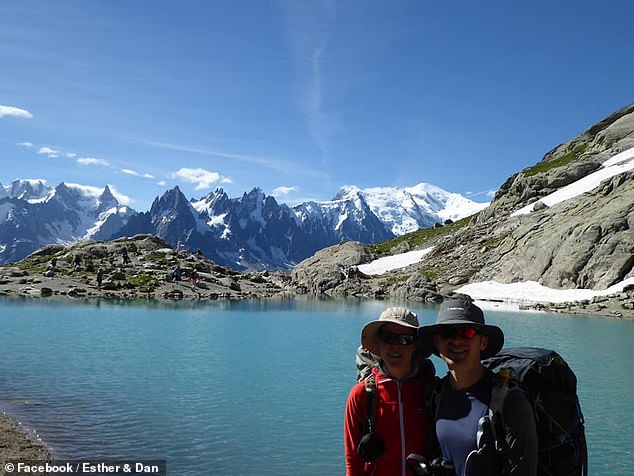 Dan and Esther pictured together. The last picture she sent him was taken from Pic de Sauvegarde, a mountaintop in the Pyrenees 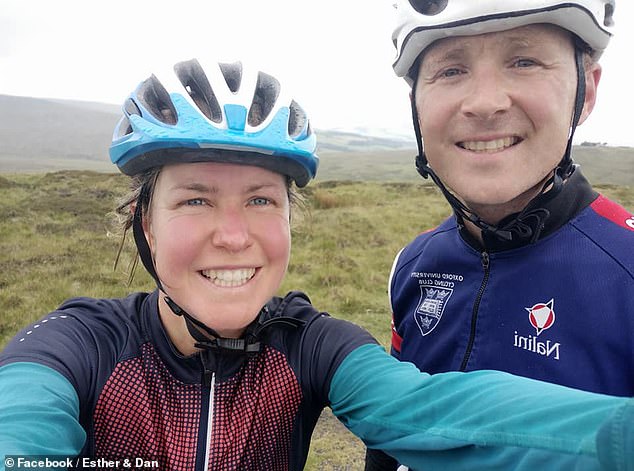 Dan, pictured, still hopes to find what happened to Esther, saying that it was strange her body had not been found at all

Writing in a Facebook post in April, Colegate said: ‘Although I still find it very hard to understand why Esther was not found in November if she had suffered an accident, a feeling that deepens the more time I spend in the area, I will continue to search because it is all I can do.’

He said he was passing any information about his search using a GPS device and would pass the information to the police and search teams.

‘I remain grateful for the support and the efforts of all of the many professionals involved in the search for Esther,’ he said.

‘It is not my place to comment on the specifics of their activities, but I am in no doubt that they have done and will continue to do all they can.’

Esther, hiker, missing, mother, of
You may also like:

Emmy Nominations: The Crown and The Mandalorian Lead; HBO Combines With HBO Max to Battle Netflix