A NSW parliamentary inquiry into the state’s deadly flood disasters in the Northern Rivers and Hawkesbury region found the information from the Bureau of Meteorology and NSW SES was “incorrect and out of date”. 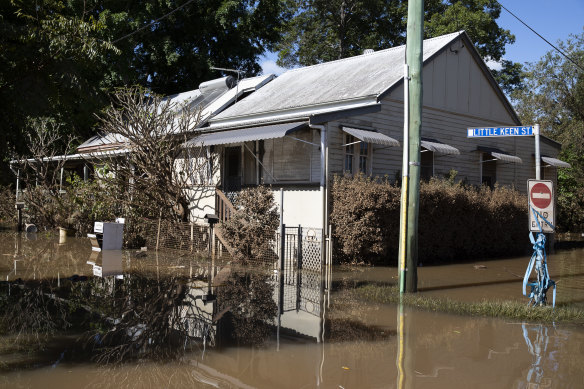 Lismore was affected by catastrophic flooding this year.Credit:Natalie Grono

It also found that emergency services, government agencies and the bureau were unprepared for, nor comprehended, the scale of the devastating floods that left 13 people dead and destroyed 4000 homes.

“Some agencies were criticised for treating it as a nine-to-five business operation,” the 200-page report notes among the 21 findings.

It also found that the lack of leadership, resources and failures from government agencies meant the community was forced to “ignore government advice and save lives, which was only possible due to local and historical knowledge and local communication”.

“In many cases, flood warnings and evacuation information were out of date, inaccurate and confusing,” Labor’s Walt Secord, who chaired the inquiry said in the report. “Put simply, the community was forced to save themselves; neighbour saving neighbour. While this is an admirable testament to these communities, it is both unreasonable and undesirable as a matter of public policy.”

But he added that issues, such as the centralisation of the SES and the shortage of volunteers, had severely impacted the agency’s ability to respond to the flooding emergency.

The report makes 37 recommendations, including that the SES should be restructured to harness local knowledge, coordinate with other rescue agencies, boost paid staff salaries and push for more volunteers.

It also suggested that Resilience NSW be abolished unless its role is clarified and its policies become more focused on meeting community needs, and First Nations people should be included in discussions about how to better prepare communities from flooding events and recovery.

The report found the government and telecommunications companies failed to ensure flooded communities had emergency communications after infrastructure was destroyed.

The report also said the government failed to provide services like housing and cash relief in time, and state infrastructure was not ready for the extent of the floods.

Inquiry participants claimed that the timeliness, accuracy and clarity of information issued by the NSW SES and BOM were inadequate and that communication issues were exacerbated by the loss of telecommunication services, particularly in the Northern Rivers region, the report notes.

A NSW SES spokesperson said the agency welcomed the “opportunity presented by the independent flood inquiry and parliamentary inquiry to identify ways in which the emergency response of the NSW SES’s volunteers and staff can be improved”.

“The NSW SES notes that the NSW government will consider the findings and recommendations of the parliamentary inquiry and respond to the parliament in due course,” the spokesperson said.

NSW Emergency Services and Resilience Minister Steph Cooke said the government would consider its findings and recommendations, and respond in due course.

It comes as many await the findings of the government’s independent flood inquiry report. The report was provided to NSW Premier Dominic Perrottet last month and he will prepare his response to its findings before they are publicly released, but one of the key recommendations will see Resilience NSW boss Shane Fitzsimmons dumped and the agency scaled down.

The report, prepared by former police commissioner Mick Fuller and Professor Mary O’Kane, will call for the agency to be cut to a small office and its responsibilities reallocated to existing government departments. A new deputy police commissioner will also be appointed to emergency and disaster management under the recommendations.

Former emergency service chiefs said the disaster agency didn’t have time to adequately establish itself before it was forced to step into action and poor planning doomed the agency from the start.