In what has become an annual tradition in Victoria, this year’s cohort of starting students were given a prep bag on their first day of school, stocked with a bundle of children’s books and educational goodies.

This time, it also contained something for parents: a booklet of tips on how to help children with their literacy and numeracy. 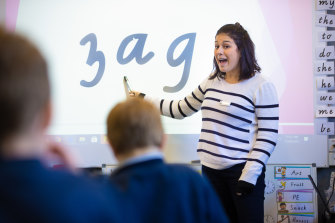 Its first nugget of advice for helping a child who is stuck on a tricky word was this: “You might help them by asking questions like these: Look at the picture. What word makes sense?”

Victorian primary school classrooms are full of books that encourage budding readers to use pictures as cues to guess unknown words.

Dog-eared and daggily familiar, they are called “predictable texts” and they’ve been part of our educational toolkit for decades.

According to prominent speech pathologist Alison Clarke, they also teach students with learning difficulties bad reading habits that can last a lifetime.

“It’s teaching the strategies of weak readers,” Clarke said. “Guessing from the picture is actually the strategy that weak readers use when they can’t decode the word or they haven’t nailed it in their memory.”

But the texts’ days could be numbered after a new version of the Australian curriculum was published on Monday that removes any reference to predictable texts and the “three-cueing system”, another staple of the literacy approach to teaching children to read.

The new curriculum focuses on building early readers’ phonic knowledge by using books that encourage children to read out words by blending letters with sounds, rather than guessing from pictures or other cues.

Victoria has its own curriculum, but it is underpinned by the national one that will be superseded at year’s end. As one of the signatories to the updated version, the state is expected to begin adapting the new version from next year. 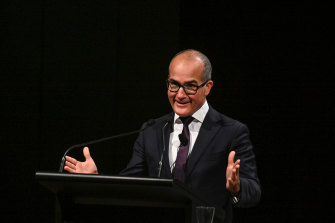 This month’s state budget includes $2.7 billion over three years to update it with elements such as new approaches to maths teaching, consent education and phonics.

Another $11.3 million has been committed for a new phonics screening check for all government primary schools to use to assess the reading ability of year 1 students.

But beyond those two budgetary line items, it is unclear how fulsomely Victoria will adopt the new national curriculum. The Victorian curriculum is not due for replacement until 2030, meaning the state could, for argument’s sake, stick with balanced literacy for at least another eight years.

Victorian Education Minister James Merlino said phonics is already a core part of the curriculum in the early years.

“Phonics is an essential component of the Victorian curriculum alongside vocabulary, comprehension, fluency, phonological awareness and oral language, and it’s clear that our approach to early literacy is paying off for Victorian students, with the highest year 3 NAPLAN results in the country,” he said.

But critics caution that the headline results gloss over concerning evidence that some students are slipping through the cracks.

“Even though Victorian students perform relatively well by national standards, there are still huge gaps in learning outcomes between the most and least advantaged students,” Grattan Institute education program director Jordana Hunter said.