Families are paying tens of thousands of dollars to have controversial Australian neurosurgeon Charlie Teo perform surgery on their loved ones in Spain while strict conditions have been placed on him operating in Australia.

The Medical Council of NSW contacted Teo’s medical indemnity insurer after a Melbourne man spoke of flying his son to Madrid and paying $70,000 to have Teo remove a tumour from his lower back. The regulator will consider alerting Spanish authorities to the restrictions on the surgeon’s registration. 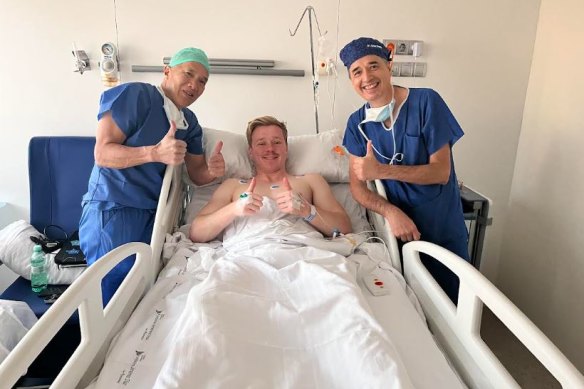 Billy Baldwin with Charlie Teo (left) after having a tumour removed from his lower back in the Hospital Universitario Fundacion Jimenez Diaz in Madrid, Spain.

The medical council imposed conditions on Teo operating in August last year because of concerns of risks to the public. The restrictions require Teo to obtain written approval from an approved neurosurgeon before he performs certain operations.

However, the council’s regulatory powers do not extend beyond Australia, and it emerged this week that Teo has assisted in at least three surgeries in the past year at Hospital Universitario Fundacion Jimenez Diaz in Madrid and Hospital Quiron de Torrevieja near Alicante. He has also participated in operations in South Africa.

Marcelo Galarza, a Spanish neurosurgeon who said he has performed two surgeries with Teo in the Torrevieja hospital, said the Australian had gained a temporary permit to allow him to operate there. A statement from Teo’s spokesman confirmed that.

Foreign surgeons are required to undertake a lengthy process of accreditation to work legally in Spain, which prevents doctors subject to restrictions from getting authorised. However, hospitals can provide temporary registration. 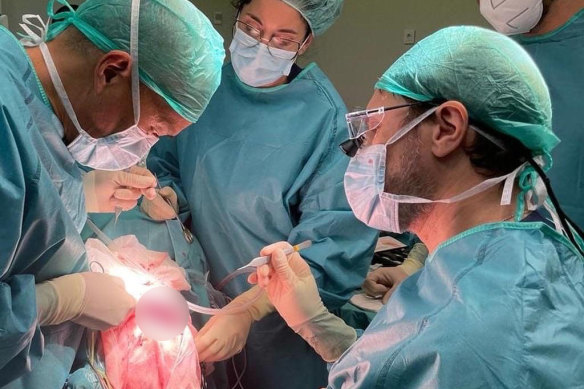 A spokesperson for the hospitals’ parent company, Quironsalud, would not confirm to The Age and The Sydney Morning Herald whether Teo had worked at either hospital or in what capacity. Unlike public hospitals, private facilities are not required to disclose the names of all the doctors present during a procedure.

The family of 20-year-old Billy Baldwin, from Frankston South, sought out Teo to remove a tumour in the young man’s lower back in July. The neurosurgeon had removed a tumour from Baldwin’s brain as a child.

Alistair Baldwin, Billy’s father, said the family redrew about $90,000 “off the house” to fly his son to Madrid and receive the treatment after sending scans to Teo last month. The money included $70,000 that was paid to Teo and other neurosurgeons as well as the hospital.

“It’s the last thing you worry about,” he said of the money. 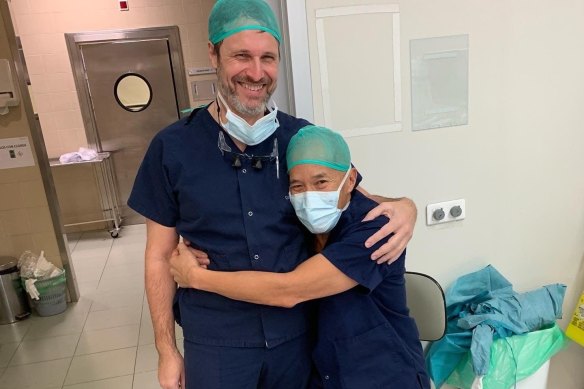 He said Teo had performed “miracles” after his son underwent two unsuccessful surgeries at the Royal Children’s Hospital at five years old and was told to prepare for palliative care. Billy lost hearing in his left ear after the childhood surgery but has gone on to finish schooling, develop a passion for the gym and study personal training.

The latest tumour detected in Billy’s lower back had affected his movement, requiring him to stand for 12 hours on his flight to Spain. He said the surgery had eased the pain.

Just two months before the Baldwins’ trip to Madrid, an online campaign raised tens of thousands of dollars for Teo to be involved in removing a golf ball-sized tumour from a US patient’s brain.

Galarza, who operated on the American patient, confirmed Teo had contacted him to carry out the procedure at his hospital in Torrevieja, about 450 kilometres south-east of Madrid on the Mediterranean coast, after US doctors hesitated to do the surgery. 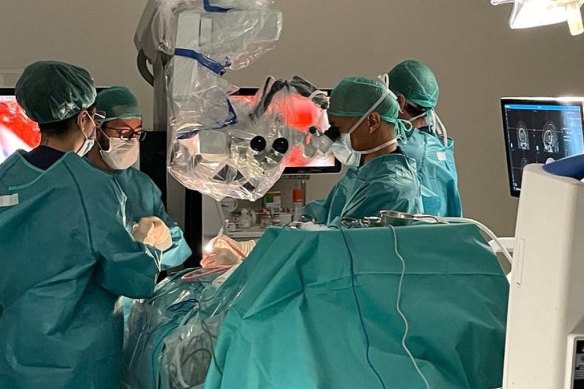 Teo operating on an Italian patient in Torrevieja alongside a team of local doctors.Credit:Facebook

Galarza said he and Teo had previously operated together on an Italian patient with a bihemispheric brain tumour in November 2021 at the same hospital, which mostly treats international patients.

“Generally, he is the first surgeon, and I am usually the assistant,” Galarza said. “The patients are Charlie’s [Teo].”

An investigation by this masthead in 2019 revealed that 14 neurosurgeons and related specialists had raised serious questions about aspects of Teo’s judgment, describing what they said was narcissistic behaviour and high fees charged to financially stressed people when public options were available.

The conditions imposed last year by the Medical Council of NSW require another neurosurgeon to be satisfied Teo has explained all material risks to the patient, obtained informed consent and informed financial consent, and complied with the use of systems and plans implemented in his practice for managing interstate patients.

A spokeswoman for the Medical Council of NSW said the council had been in contact with Teo’s representatives in response to reports he was operating on patients overseas.

“The council is considering whether to contact Spanish authorities subject to the information provided,” she said.

In a statement provided via a spokesman, Teo said he was no longer performing brain surgery in Australia “despite demand for his services from both patients and other neurosurgeons”.

The statement said Teo was still registered as a surgeon in Australia but had been precluded from performing surgery in hospitals in the country. He was now assisting in neurosurgical procedures overseas, providing advice to other neurosurgeons and lecturing.

“I am passionate about caring for my patients, and it is my intention to continue helping them here and overseas,” Teo said.