Rita Wilson is a musician and actor best known for being the producer of My Big Fat Greek Wedding. The 65-year-old opens up about being mentored by Bruce Springsteen, why it’s never too late to create, and her marriage with Tom Hanks.

My dad, Allan, escaped communism in Bulgaria in 1949 for a better life in the US. Dad had seen the [1927] movie Chicago, and in that he saw America – he told me that’s what inspired him to want to move here. Every morning, he would wake up and say, “God Bless America.” I totally understood what that meant from his point of view. 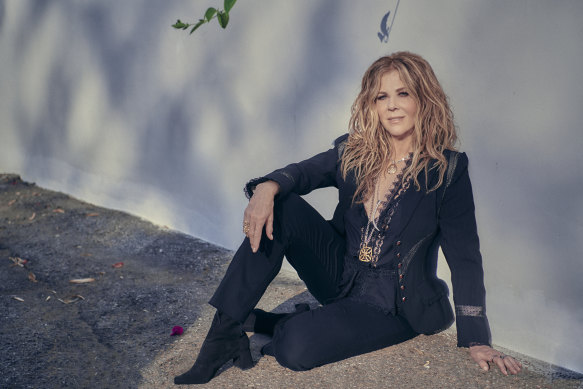 “No one decides that your time to create is up, or that you should have done it in your 20s.”

Dad met my mom, Dorothy, at a Greek/Bulgarian dance in New York. He worked in a bar back in the early days of his arrival, then made his way up to bartender at the King Cole bar in the St Regis Hotel on Fifth Avenue. Then my parents moved to California, where Dad also worked in bars and at race tracks. Their marriage lasted 59 years until he died in 2009.

My brother, Chris, is two years younger than me and a very independent and funny guy. He is a musician and has a great ability to make friends. I still look up to him and he still plays in bands. He composed the music for My Big Fat Greek Wedding.

Chris draws hilarious cartoon illustrations and has a dry wit. He’ll send me a text in the middle of the day; it’ll be the name of a 4th grade person I haven’t thought about in 50 years that will make me burst into laughter thinking about the past.

My first kiss was at the top of the stairs at the end of school in 6th grade with a guy called Brad. He gave me a turquoise St Christopher pendant, which I kept for a long time.

My African-American French teacher, Mr Long, taught French in such a beautiful way I fell in love with it and continue to speak it. I spend a few months living in France every year.

In 1972, I played a cheerleader, Pat, in an episode of The Brady Bunch – that was pretty cool. At the time I also had a crush on David Cassidy from The Partridge Family. I ended up going on a few dates with his brother, singer Shaun, in the 1970s.

On my new album, I duet with Jackson Browne on the song Let It Be Me. As teenagers, we would drive by his house to see if we could spot him. I fell in love with his voice in the ’70s and it still sounds the same. His music is so open, vulnerable and honest.

Elvis Costello came to my old school, Hollywood High, to play in 1978 and he passed out pink-vinyl 45s of his song Alison. We sing Fire together on my album.

Being able to sing with icons like Smokey Robinson and Willie Nelson isn’t lost on me. Willie is close to 90, and to be able to interpret Paul Simon’s Slip Slidin’ Away with him was a very intimate and beautiful moment.

Bruce Springsteen is an incredible inspiration and mentor. He liberated me from self-doubt when I asked him about songwriting. When he speaks, it’s like a masterclass. I asked him what makes me think I can start writing songs at my age, considering he’s been doing it all his life. He replied, “Rita, it’s because creativity is time-independent.” It blew my mind; he was right. No one decides that your time to create is up, or that you should have done it in your 20s.

I am lucky to be married to Tom Hanks, who loves music, and while we have very different tastes, we intercept in specific areas. It’s fun to share music and have that connection.

I knew I would get married one day and I always wanted children. I got a little bit of experimentation by having stepchildren [Colin, 44, and Elizabeth, 40] before mine were born.

I always wanted to raise my boys [Chet, 32, and Truman, 26] as if I was raising women, so they’d understand what it’s like for women out there. That is an important lesson. I also insisted they took music lessons – and now they both play instruments.