Riverdale, TV’s most bonkers show, makes a case for jumping the shark

In terms of nutty TV moves, there’s jumping the shark and then there’s suddenly jumping your entire series seven years into the future, as popular teen show Riverdale did last week.

The series, a noir-ish reboot of Archie comics broadcast in Australia on Netflix, is a perennial punching bag for its outlandish plot twists and incongruous character dynamics that include high school students running underground speakeasies and “maple rum” empires. 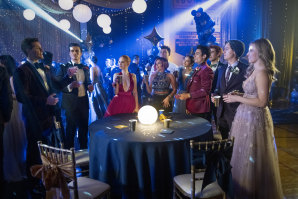 But even its most earnest fans (I’m sure they exist somewhere) would’ve been stunned by the show’s insane decision – spoiler alert – to launch its new fifth season with a near-decade time-jump. Following graduation, Archie’s now an army sergeant who narrowly escaped death in some unnamed war; Jughead’s a literary sensation battling writer’s block and alcoholism; Veronica’s a successful Wall Street trader locked in an unfulfilling marriage; and Betty’s an FBI agent (not too dissimilar to her high school experience, actually).

Even for a show whose campy charm has long necessitated a heavy suspension of disbelief, the revelations have spawned a collective eye-roll from casual onlookers and accusations it had finally, irretrievably jumped the shark.

“Please, I think we stopped having conversations about jumping the shark with Riverdale probably around season two,” laughs creator and showrunner Roberto Aguirre-Sacasa.

He’s got a point. That’s the season when a serial killer named The Black Hood – later revealed to be Betty’s father – terrorised the ever-tormented town, while Archie countered with his own masked vigilante group, The Red Circle, largely consisting of high-school footballers.

While “jumping the shark”, with its origins in what’s generally regarded as Happy Days′ most outlandish moment (a 1977 episode in which leather-clad rebel Fonzie literally jumps over a shark while water-skiing) clearly has pejorative connotations – the idea that a show has exhausted any logical developments for its characters and instead settled for the ridiculous and fantastical – there’s perhaps something to be said for the trope.

Many a long-running soap, such as our own Neighbours and Home and Away, have regularly veered into the unlikely, and essentially extended their use-by dates by working through logic-defying plot twists (who can forget the time a tornado ripped through Erinsborough, or the multiple instances when Summer Bay’s teens were brainwashed into joining bush cults?). The early success of Seven’s new game show on acid Holey Moley even seems to indicate that viewers have an appetite for TV at its most ridiculous.

In Riverdale’s case, there’s something undeniably ballsy and exciting about a hit series simply shedding its baggage and leapfrogging its action into the vast unknown. Aguirre-Sacasa says, firstly, practical concerns were at play, with the show’s popular cast – a few core members are now pushing their late 20s – helping drive the decision.

“Very early on we made the decision that although, obviously, the characters were teenagers and the high school would be the backdrop, that it would always be bigger than a high school show. So when the moment to graduate them came, rather than send them all off to ‘Riverdale University’ or whatever, it was, ‘Let’s just get them closer to [the cast’s] real ages’,” he says. 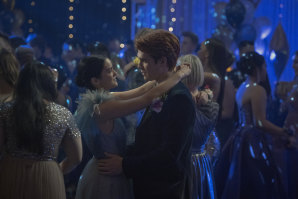 “I don’t think anyone was excited about doing a college show. And I think no one wanted to do a show where the kids didn’t go to college and just stayed in Riverdale,” says Aguirre-Sacasa. “Also, after four years of trying to justify why a teenager can serve alcohol at the speakeasy she owns and how it can be that every kid has a gun in Riverdale, there was sort of a relief that okay, they’re in their mid-20s now and all these things are legal.”

With its postmodern mish-mash of pop culture tropes, including references that stretch from ’40s noir through to ‘90s teen melodrama and beyond, the series’ essentially timeless tone means such a vast time-jump, miraculously, doesn’t even feel jarring.

“I do think people like coming-of-age shows and high school shows, but I think for Riverdale they really love the characters and the actors and they’re happy to follow them no matter what they’re doing,” says Aguirre-Sacasa. “I mean, my hope is it’s OK?”

bonkers, Most, Riverdale, S, TVs
You may also like:

Golden Globe predictions: Who we expect to win in 2021

Molly has a meltdown after her parents take her phone away

Forget the headache excuse, sex can actually help a headache

It only took a lockdown, but I've finally learned how to feed myself – age 25