It was meant to be an expose of the exploitation of lowly paid gig workers by “a multinational food delivery behemoth”. But now the makers of the upcoming SBS On Demand series Appetite have been called out for their own alleged underpayment.

On June 9, a production assistant for the low-budget series being made for the streamer by independent production company Photoplay posted a Facebook call for “bike riders (with own bike) to ‘BE AN EXTRA for SBS on Demand series!’” 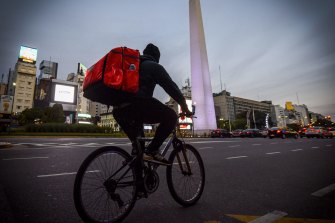 The world of vulnerable and exploited delivery riders is the subject of the short-form series Appetite, now in production.Credit:Getty Images

The gig would demand being available for one to two days between June 16 and July 1 in inner-city Sydney. International students were welcome. In return they would get a feed – and nothing else.

Apparently it was an offer too lousy not to refuse because the ad was posted again on Friday, with only the dates altered. Now bike-owning international students were invited to work without being paid from June 27 to 30.

Under the industry-wide agreement administered by the Equity branch of the Media Entertainment and Arts Alliance (MEAA), extras are to be paid a day rate of $211.63. If employed by the hour the rate is $28.79, but they must be paid for a minimum of four hours ($115.16).

Under the terms of the Actors’ Television Programs Agreement, if the producer requests that an artist uses their own transport, they are also entitled to an allowance (96 cents per kilometre for cars and 46 cents for motorcycles). Travel time each way is counted as time worked.

Appetite was announced in February, when it received Screen Australia funding under the Digital Originals program, a joint initiative of the screen agency, SBS and NITV.

The program aims to “support screen creatives currently under-represented in the sector, including people who identify as culturally and linguistically diverse, First Nations Australians, people with disability, female and gender diverse, LGBTIQ+ and those who are located in regional and remote areas”.

The six-part series of 10-minute episodes, made specifically for the streaming platform but likely also to appear on the main channel as a 60-minute short feature, appears to fit the bill, with a diverse writing and directing line-up, and a story about a marginalised and underpaid group in Australian society.

“When a food delivery rider dies on the streets of Sydney,” ran the pitch when the show was announced, “an unlikely trio of fellow riders find themselves entangled in a mystery to uncover the truth and expose a multinational food delivery behemoth”. 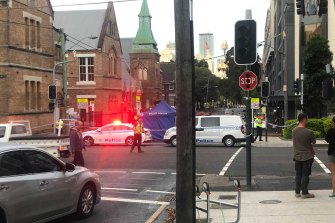 Real-world tragedy: a food delivery rider died following a collision on this intersection in Sydney in November 2020.Credit:Nick Bonyhady

But expecting people to work without being paid might make even the worst offenders in the gig economy blanch in shame.

However, an exemption in the agreement covering television allows producers, “for the purpose of authenticity”, to “invite members of the public in civilian dress to join in a scene” without those people being considered employees and needing to be paid.

It’s a grey area that leaves the precise status of the called-for international student bike riders open to interpretation.

But funding agency Screen Australia was in no doubt. In response to questions from this masthead a spokesperson for the agency said the post had now been taken down.

They added that “the production team are aware of their obligations in relation to crew remuneration as per the terms of the Production Grant Agreement”.

SBS echoed that line in a statement of its own, also issued late on Friday.

“A social media call out for volunteers by the production company commissioned for short form digital series Appetite has since been removed,” a spokesperson said. “SBS can confirm those performing work on the production will be paid, in line with the production team’s contractual obligations.”