Follow
Home » Lifestyle » Spoilt for choice, if you can find it: Rating the Olympics on 7Plus

Spoilt for choice, if you can find it: Rating the Olympics on 7Plus

Olympics streaming coverage on 7Plus ★★★½

Watching the Olympics on 7Plus brings to mind that old Bruce Springsteen song , 57 Channels (and Nothin’ On). Except in this case there’s so much on it’s impossible to know what to watch, or how to find it. 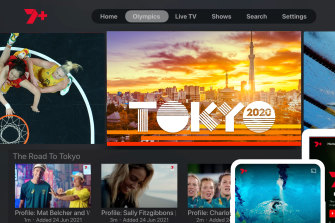 Seven has found a massive audience with its streaming of the Tokyo 2020 Olympic Games on 7plus, but the app is not without its issues.Credit:Seven

Seven says it has 45 separate streams of Olympics coverage on 7Plus. That figure includes streams of the TV channels (7 and 7Mate), a dedicated Olympic news channel, and an oddball “Gamers vs” channel in which a couple of Japanese geeks explore sports.

At any given moment many of those streaming channels might be blank, but it’s a truly impressive array. You can watch surfing, mountain biking (possibly the most spectacular event in these games, and the one best suited to television), badminton, skateboarding, equestrian, fencing … and on it goes. Oh yeah, swimming and athletics too.

You can watch events live, full replays of events after the fact, mini-match replays (typically around 18 minutes) and micro-highlights (three or four minutes). This smorgasbord of packages is fast becoming the way we consume televised sport (soccer fans have long known just how good the 25-minute mini-match option is) and it’s good to see 7Plus has integrated it.

So much for the positive. There are negatives with the app too – and none greater than the fact the Olympics has been shoehorned into Seven’s existing platform rather than getting one of its own. 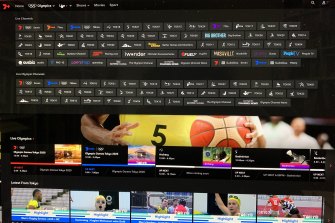 This menu is not your friend: shoehorning the Olympics into the pre-existing app has created some issues with navigation.Credit:Screen grab

This is no doubt a response to the issues of 2016, when users were charged $20 for the premium version of the Olympics on 7 app (offering up to 35 channels), only to find it was glitchy and often failed to work at all (problems the network blamed on “outsourcing”).

This time around it’s free (good), but it has lots of ads (especially for The Voice), requires users to register, and it’s incredibly difficult to navigate (not good). Do you want to watch archery next or The Surgery Ship? Wait, that’s a TV show, not sport. Beach volleyball or Bones? Aargh. 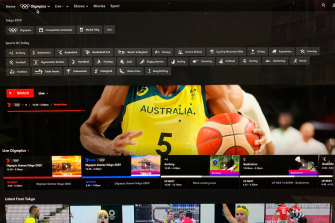 This menu is your friend: a great place to land if you want to navigate the Tokyo Olympics coverage on 7Plus.Credit:Screen grab

After four days of messing around with it, I’ve learnt a few things: you can tell if an event is actually being streamed at that moment by the bar at the bottom of the tile (if it’s greyed out, the event is either over or hasn’t started yet); navigating is far easier on a computer than on the phone; there’s a handy competition schedule (a menu bar at the top of the screen when you select “Olympics”) that allows you to click through to watch events live; and not all heats of all events are streamed. Also, the selection of mini-matches is pretty limited.

This last is maybe fair enough, but it’s an inevitable paradox that when you offer so many options people will come to expect absolute choice.

Nor is there commentary for all events, even when Australians are involved (I watched Stephanie Gilmore be silently eliminated from the women’s surfing competition). That doesn’t just rob the coverage of excitement, it also denies the viewer the opportunity to learn a bit more about a sport they might never have watched before, or at least haven’t since, oh, 2016.

Some of the commentary has been excellent; there’s no doubt having an Ian Thorpe or a Leisel Jones in the box affords insight into the preparation, mindset and strategy of a swimmer. And occasionally it’s not knowledge but bafflement that resonates, as during the skateboarding when the commentators confessed to not quite knowing how the judges would be applying certain rules in this newest of Olympic sports. If the experts don’t get it, we’re off the hook, right?

Sadly, the same grace cannot be extended to the commentary during the opening ceremony: the UAE is known for fast camels and tall buildings? Puh-lease.

It’s tricky, but by day 15 I believe I think I might have fully mastered this app. If channel surfing is an Olympic sport at Paris 2024, I reckon I’m in with a chance.