Nobody could be more enthusiastic about the release of the latest census data than newly minted Assistant Treasurer Andrew Leigh.

An economics professor before he entered parliament in 2016, Leigh suspects he is “the biggest stats nerd” the Australian Bureau of Statistics has had as its minister in its 116-year history. 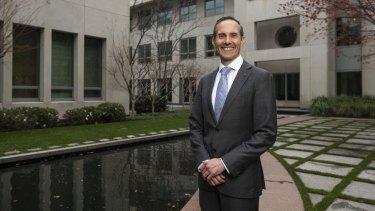 The new Assistant Treasurer, Andrew Leigh, is looking forward to the release of the census. Credit:Rhett Wyman

“I’m so excited. It feels like I’ve been training for 20 years for this job,” the former academic, now Assistant Minister for Competition, Charities and Treasury told The Sydney Morning Herald and The Age.

Tuesday’s release of the 2021 census is more than a data dump of statistics, Leigh says. Those statistics about people’s movements, income and health will form the foundation of the policies of the new federal government.

“Understanding the movement to regional Australia, whether the impact of COVID has slowed the growth of urbanisation, I think is really vital,” he said.

The census is the most well-known survey conducted by the bureau. But its work in other areas, including household spending, work participation and wages, is also vital to the government’s understanding of Australia.

His economics background also means he understands how integral the bureau is to Australian decision-making.

“But then there’s also the potential for better data to tell us what’s working and what’s not.”

The census data is published nearly a year after the survey was conducted and the pandemic helped shift the way the bureau operated.

The release of the 2021 census, which covers the years 2016 to 2021, should provide a picture of how the pandemic changed Australia.

A census is also a snapshot of the time in which they were conducted. On the night of last year’s census, almost 15 million Australians were in some form of pandemic lockdown.

It is not the first time the census has captured a pandemic.

The 1921 census, taken in the aftermath of the Spanish flu pandemic, did not have to worry about people in lockdown. Census takers, some of whom worked on horseback, found 5221 people were living in wagons or camps while 2223 buildings were made of bark.

Previous censuses have provided insights into Australia of global importance.

Australian medical statistician Oliver Lancaster used the censuses of 1911, 1921 and 1933 to establish a link between rubella and congenital problems in unborn children, having found a relationship between the level of deaf-mutism in people born in 1898 and 1899 and a known outbreak of rubella at that time.

In more recent memory the 2016 census was disrupted by a series of denial of service attacks that crippled the system on census night. An attempt to restore the computer system led to the failure of a router, which made the situation worse.

That disaster brought unwanted attention to the census and successive ministers have worked hard to make sure the integrity of the data is maintained.

“People often think that in economic policy, we should be wondering about the quality of forecasts. But what they forget is that knowing what’s happening now, so-called ‘nowcasting’, can often be just as critical,” he said.

For example, the bureau currently publishes quarterly data on household inflation in its consumer price index, which includes price changes for household items including groceries and clothing.

But the bureau is working on a business case to move to monthly reporting following a 2010 review that found more regular updates would allow for more timely and responsive economic management.

“Increasingly, we’re going to be speeding up the release of data,” Leigh says.

“Having more regular flows of information can only help to improve the quality of policymaking.”

Leigh’s portfolio will also see him take charge of oversight of the regulation of charities.

“I’m really excited by the opportunity to shape an Australia where not only do we have faster rates of growth, but also greater levels of equity, and stronger levels of community connectedness,” he says.