Follow
Home » Lifestyle » Sydney’s night mayor: ‘My job is to get people out of the house and having fun. And often.’

Sydney’s night mayor: ‘My job is to get people out of the house and having fun. And often.’

Like a loitering spectre, he feels its presence constantly, a devil-on-his-shoulder beckoning him to kick back in homely comfort, an inanimate metaphor against all he values and defends.

“In my house, the couch has a big target on it. The couch is public enemy number one,” the 45-year-old laughs. “Because my job is to get people out of the house and having fun. And often.”

The role was newly created out of the NSW Government’s Sydney 24-Hour Economy Strategy, published in September 2020 and aimed at invigorating the city’s night-time offerings and tapping into the potential to create jobs and expand productivity into the 6pm to 6am time block.

As part of the strategy, the state government shed various rules and bureaucratic red tape around night trading, including a wide-ranging roll back of its own infamous CBD lockout laws and relaxed restrictions around liquor licensing, live entertainment, food truck and pop-up applications, and noise. 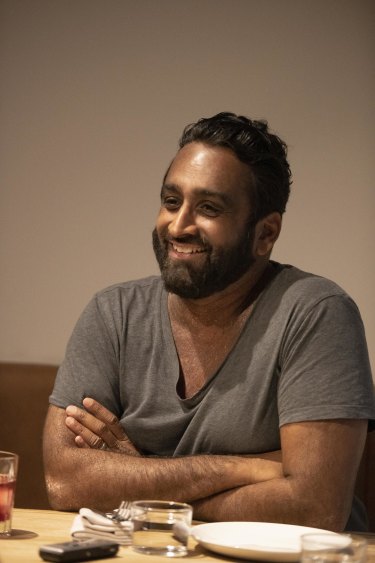 “Cities all around the world are thinking about the night-time economy, because what you have is a large amount of investment in living infrastructure – be it transport, roads, buildings – but if it’s only getting half-utilised, is that really a good thing?” Rodrigues explains.

“It’s like, we just came out of lockdown and everyone needed a haircut – well, barbers should be able to trade later if customers want to get their haircut later, right? Why are we stuck in a world that says you must trade between 9am and 6pm? It’s this increased understanding that, from an economic view, a city is an asset and like most assets you want them working more than less.”

A post-dinner buzzcut after, say, dumplings in Ashfield is a beautiful vision. Personally, I’d just like to be able to get a good coffee at 3am.

Rodrigues has been in the role since March (he’s so fresh to its public scrutiny, he insisted he pay his half of our dinner bill). A former managing director of Time Out magazine – he licensed and launched the publication in Australia in 2007; before that he was a lawyer at Allens specialising in project finance – he later co-founded the Independent Bars Association and the Night Time Industries Association after seeing the city’s going out culture atrophy amid the lockout laws.

“Ultimately, at Time Out I got bored with us just writing stories about [the lockout laws] and not actually doing something about it. There’s a difference between commentating and getting in and campaigning, and actually trying to change something.” 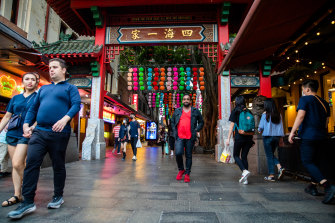 Michael Rodrigues in a bustling Chinatown in February before the lockdown.Credit:Edwina Pickles

The night-time focus of Rodrigues’ role justified a PM shift for this feature’s usual lunchtime slant. On a bustling Wednesday evening, we booked a table on the upper balcony of Odd Culture on Newtown’s King Street, a new diner from the group behind inner west hangs Oxford Tavern and Duke of Enmore, on the site of the old local institution Happy Chef.

‘You have a large amount of investment in transport, roads, buildings – but if it’s only getting half-utilised, is that really a good thing?’

The Chinese restaurant burned down in a fire in November 2018, prompting hand-scrawled messages of gratitude across its boarded up facade from locals for months as it was being gutted. Inside Odd Culture, a casually hip joint where patrons sip sour beers as Tom Petty and Mitski blare loudly through the speakers, a Happy Chef logo on one of its walls nods to the space’s cherished history.

Rodrigues says the venue is emblematic of the city’s entrepreneurial hustle – an attitude he finds essential in his new role helping to reimagine Sydney’s post-lockout, post-lockdown possibilities.

“Sydney always has this ambition, where it doesn’t matter what the circumstances throw at it. Even in the face of a pandemic there’s still people that are like, ‘You know what, we’ll give it a go anyway!’” he says, sipping Odd Culture’s signature sour negroni (cherry lambic vermut, gin and Campari). “Opening a new venue in a market like this is, I think, such an embodiment of Sydney’s ambition.”

Lockdown, particularly, has “made everyone understand the value of going out,” says Rodrigues. During the spell at home he started cooking vegetarian for his wife, Vicky, and two daughters, aged 5 and 8. “But now when I go out, I’m just like, I’m having meat,” he laughs. 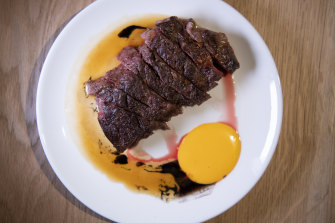 He eats vegetarian at home, so time to order hanger steak, with burnt garlic and egg yolk sauce. Credit:Wolter Peeters

As Sydney’s new “night mayor”, it seems part of the job to dine out like this.“I do alright,” Rodrigues laughs.

“There were periods there at Time Out, Monday night in particular, where I was constantly out till 2 or 3am. At the moment, I’m better serving my stakeholders to ensure businesses are getting relief. But I’ve just got to find a bit of balance and not have my wife initiate divorce proceedings.”

The lingering pandemic, with its public health restrictions and absence of tourism, has shaped Rodrigues’ early stint in the role. His main focus, he says, is “getting conditions for trade to a level that can allow businesses just to function in a new normal”.

“But then I’m also keen to use this as an opportunity to think about possibilities,” he adds. “This is not a restoration job. We get to reimagine the future, and reimagine it for a new generation who may not necessarily want to do the same things an older generation wanted to do.”

The question around what Sydneysiders want to do at night is manifold. Research cited in the government’s strategy, for example, found that 78 per cent of people “would like more night-time activities that do not centre around alcohol”. Sydney’s cultural diversity means these experiences are readily available, says Rodrigues. 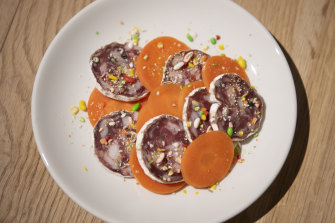 He recalls a spell living in Dubai for a few years, far removed from our “big night out” culture of boozing till 3am. “It was a late-night culture because it was burning hot during the day. At night we’d go out for shisha and mint tea, and oftentimes the locals would be out till 5 or 6 in the morning having Middle Eastern barbecue.

“Now, I look at our population and I think, well, that’s happening here, but it’s happening behind closed doors because it isn’t embraced as well as it could be in the public domain,” he says.

As such, a key concept in the government’s strategy is the “Neon Grid”, which aims to identify and promote safe 24-hour hubs beyond the CBD. Born to Indian immigrants in the western suburbs (he grew up between Liverpool and Campbelltown), Rodrigues is eager to make each local council area vibrant in its unique way.

“I see my role as creating an enabling environment that gives people of all ages and backgrounds and socio-economics an opportunity to participate in culture,” he says.

“So if it’s Haldon Street in Lakemba, or Wigram Street in Harris Park – how exciting is it to have all that? That’s my version of streaming in real-life: if you liked this, you might also like that. That’s kind of what the strategy is trying to do, it’s saying: how do we tell a better story of this great diversity of experiences in Sydney that don’t necessarily need to be expensive and don’t necessarily need to revolve around the consumption of alcohol?” 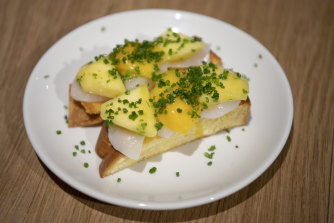 ‘Fish on Toast’, with raw scallop, mango and jalapeno.Credit:Wolter Peeters

In terms of night-time activities, Rodrigues says it’s not his role to prescribe what they should be. “Should you be going to three live gigs and a comedy show a week? Not up to me,” he says, recalling Time Out’s “agnostic” stance around going out. “It’s not about saying opera is better than ballet is better than music – all of it is better than being at home every night, so go and do something!”

He’s excited by “immersive experiences”, the work of companies like Punchdrunk and Meow Wolf overseas and a form that’s already gained traction in Sydney with productions such as A Midnight Visit and Hidden’s upcoming The Great Gatsby. But he’s more interested in “fostering the conditions for creativity to thrive” than in defining what they might be.

The urgent, if less sexy, opportunities lie in “those one to two per cent improvements” in people’s going out experience, he says, such as the rise of device use in venues with the recent uptake of QR codes and the ability to order-at-table at bars and restaurants.

“Think of what’s happened in the past three to four years, the choices you have now at home,” he says. “In the pandemic flat-screen TVs went through the roof, streaming spiked, delivery services proliferated. My brother-in-law lives two kilometres from Broadway; he’ll order popcorn and a frozen Coke from the cinema and watch a movie at home! Because he’s got a three-metre video screen and he’s in the comfort of his own house.

“That seamless experience we have at home is becoming the expectation of when you go out,” says Rodrigues. “So if it takes two clicks to stay in, how many clicks does it take you to go out?” 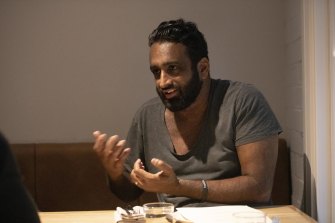 He points to YCK Laneways – the recently rebranded cluster of world-class cocktail bars on York, Clarence and Kent Streets in the CBD – as a tangible example of “what the future of going out in Sydney can improve to be”.

“Let’s say me and you go, oh we want to go to YCK now. I’ll get an Uber and rather than picking a single venue, I’ll just hit YCK. Then as you’re rolling into YCK, what if you could see the capacities at all the bars? If we want to meet new people, we’ll go to a bar that’s 80 per cent full. If we want a quick drink before the theatre, we’ll go to one that’s 20 per cent full. And then, because your phone’s already out, what if you could just order a drink the minute you walk in?”

Sounds convenient. But will I be able to get that 3am coffee?

“I would like to see that as a given, in more than one council area,” he says. “I think that happening in increased instances in small pockets is definitely achievable.” 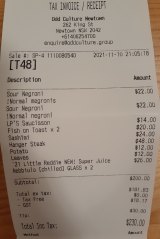 “When I was interviewing for this role, I asked people to tell me a great memory of a night out and why. And inevitably, people said, ‘Oh, we went to do this thing and then this other thing happened.’ It’s the unexpected. And in order for that to happen you need an element of critical mass.

“But I think already a fear of missing out is coming back,” he adds. “It’s that feeling that you weren’t there and you missed the most amazing night ever.”

'Eternals': Director Chloé Zhao Reveals That the Post-Credits Scene 'Sets up so Much' in the MCU