From a lost Constable worth £2million to a ‘Henry Moore’ sculpture used as a doorstop, FEMAIL reveals the most remarkable finds – and disappointing frauds – on BBC’s Fake or Fortune? as it celebrates its 10th series

The tenth series of BBC One show Fake or Fortune? premiered this week, with presenters Fiona Bruce and Philip Mould once again leaving viewers on the edge of their seats as they expose either genuine masterpieces – worth a princely sum – or convincing frauds with a next to nothing value.

As the show celebrates the milestone, there’s no let up in the antique drama, with the latest episode seeing a unique artwork, painted directly onto the wall of a cottage in Surrey, found to be a deliberate collaboration between two well-known artists, meaning the house’s owners have instantly added £50,000-£100,000 to the value of their home.

The series, which had the original working title of Sleuth when it was first conceived, before being changed to Fake Or Fortune?, has proved a surprise long-term hit for the BBC.

Here, FEMAIL casts an eye back over some of the most surprising finds the show has unearthed during its ten years on air…and the counterfeits that have sparked disappointment for owners… 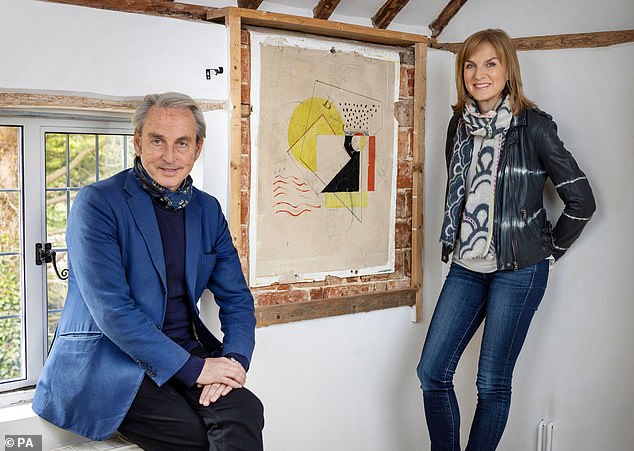 The show, which had the original working title of Sleuth when it was first conceived before being changed to Fake Or Fortune?, has proved a surprise long-term hit for the BBC. The show’s presenters, Fiona Bruce and Philip Mould, are now well into their tenth series of the programme, where experts decide if a painting is real or fake 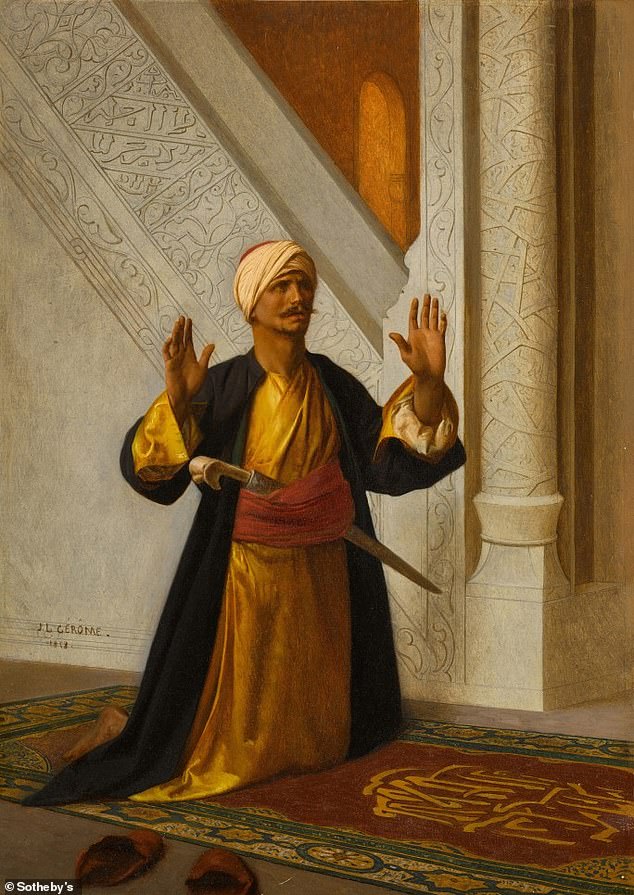 This work by Jean-Léon Gérôme, entitled ‘At Prayer’, was authenticated by Fake or Fortune? in 2021, much to the delight of its owners…and deemed worth £120,000

In an episode airing in October last year, a painting by a 19th-century French artist was estimated to be worth £120,000 – two decades after it was bought for £3,800 in New York.

The work by Jean-Léon Gérôme, entitled ‘At Prayer’, was authenticated following an investigation by the BBC’s Fake or Fortune team.

Mr Swihart was sure the painting could be a work by the actual artist – and enlisted the help of presenter Fiona Bruce and art dealer Philip Mould to help confirm this.

During the programme on August 4, Mould pointed out to Mr Swihart that his painting would have only been worth about £1,000 if it was not actually by the artist.

Art historian Emily Weeks, who is an acknowledged expert on the works of Gérôme, carried out a critical re-appraisal on the show and was able to authenticate the work. 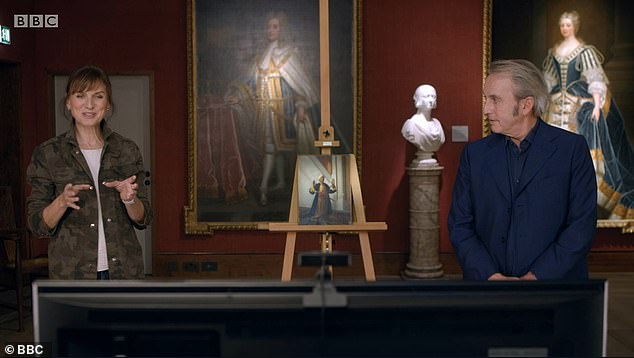 Fake or Fortune? presenter Fiona Bruce and art dealer Philip Mould with ‘At Prayer’ in the middle; the pair are celebrating 10 years of presenting the show 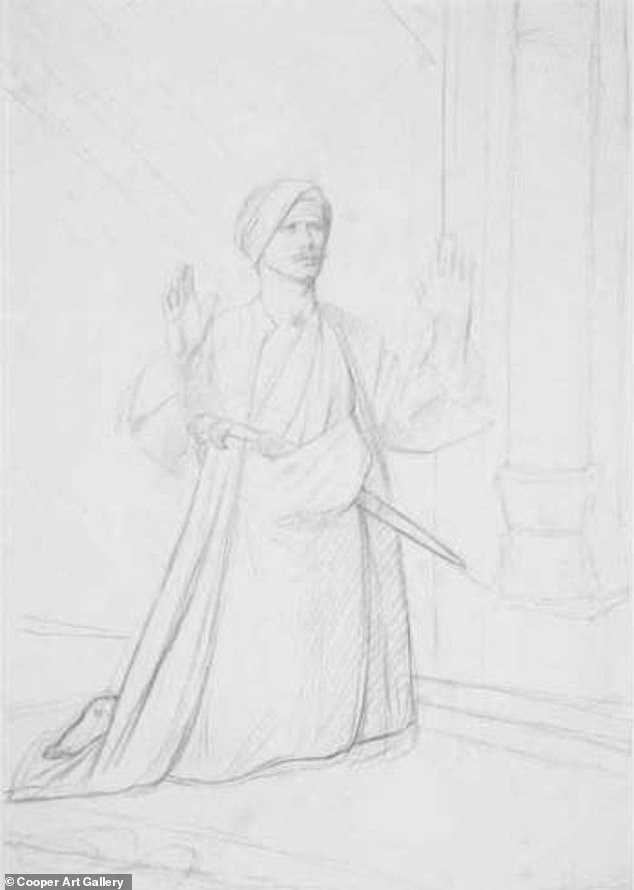 Proof: A key piece of evidence was a pencil sketch by Gérôme held by the Cooper Art Gallery in Barnsley, South Yorkshire, of a robed and turbaned man who is kneeling

A key piece of evidence was a pencil sketch by Gérôme held by the Cooper Art Gallery in Barnsley, South Yorkshire, of a robed and turbaned man who is kneeling.

Experts also noted the position of the worshipper praying away from the minbar, and therefore Mecca, rather than towards it – something Gérôme was known for.

Gérôme was said to have done this because he wanted to show people the intensity of the worshipper’s expression while also including the ornately-carved pulpit.

FAKE: Drawing hoped to have been worth £100,000 by French artist Auguste Rodin proved a fraud 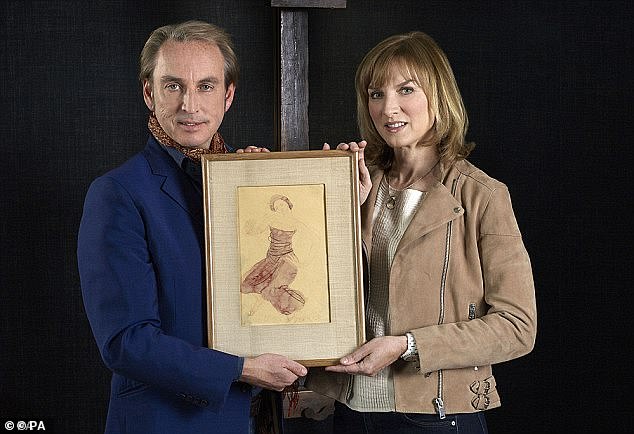 The owner of the picture at the time, Alice Thoday, approached the BBC One television show Fake or Fortune? after she inherited the watercolour from her mother 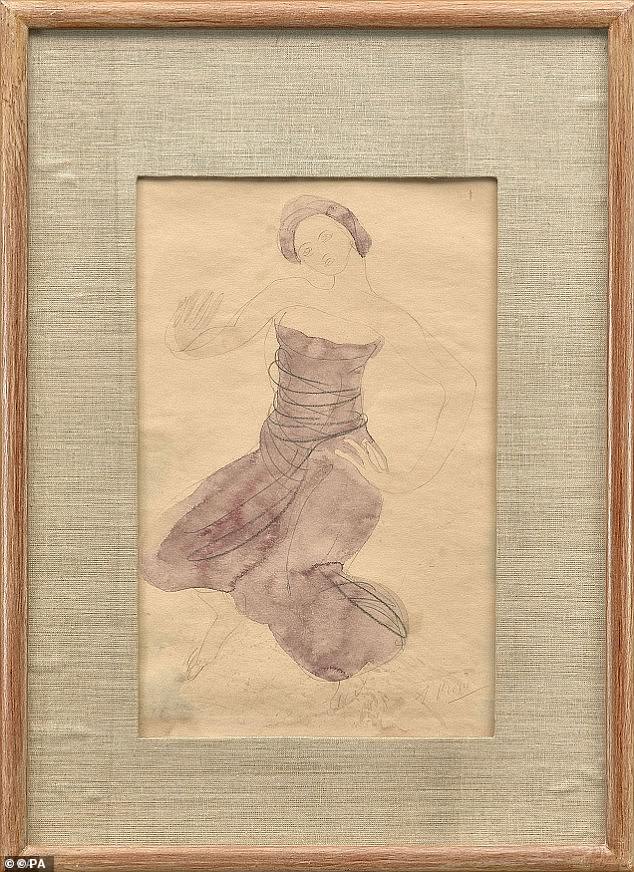 The drawing of a dancer was investigated and was judged to have been produced by a forger, who claimed he was Rodin’s last pupil

A picture thought to have been a £100,000 piece of work created by famous French artist Auguste Rodin has been revealed as a fake.

The drawing of a dancer was analysed and is believed to have been produced by a forger who claimed he was Rodin’s last pupil.

The owner of the picture, Alice Thoday, approached the BBC One television show Fake or Fortune after she inherited the artwork from her mother.

Ms Thoday, from Lincolnshire, and her family always believed the picture was one of a series of work Rodin drew of a Cambodian dance troupe who visited France in 1906.

If it was a genuine piece of art created by the famous sculptor, the work would have been worth at least £100,000.

A French conservator with expertise in Rodin’s Cambodian dancers could not determine the authenticity of the work after analysing the sketch.

But doubts were raised by a handwriting analyst who compared the signature on Ms Thoday’s work with examples of Rodin’s autograph as they couldn’t be sure they were written by the same hand.

Christina Buley, who uncovered several fake Rodin works in a collection at the Musee d’Orsay in Paris in 2014, said she did not believe the long-treasured artwork was created by Rodin.

She felt it had more of the distinctive stylistic hallmarks of forger Ernst Durig.

After the verdict, Ms Thoday said she had wanted to know the truth – and that despite the team being unable to prove the family’s belief that the work was by Rodin, it will remain hanging on her wall.

Expert Philip Mould said: ‘Making this programme showed me just how great a draughtsman Rodin was – he is so well-known for his work as a sculptor but this dimension of his work is just as compelling.

‘We’re dealing with an artist who has been faked with competence by those close to him. It’s understandable in the high-stakes art world that this leads to extreme caution and scepticism.’

Host Fiona Bruce said: ‘Never before have we investigated an artist whose work has been so comprehensively faked – and whose fakes have been displayed at the most renowned art institutions in the world.

‘Rodin is known primarily for his sculpture but he produced thousands of drawings and the fact he was so prolific is a big part of why he was so hugely faked.’ 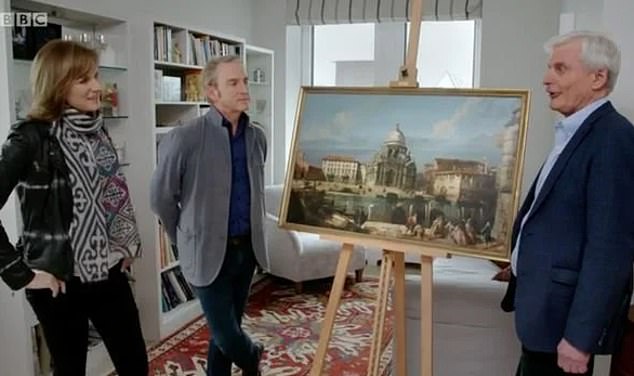 Hard to hear: In 2019, a painting that was thought to be a masterpiece by Canaletto was found to be a fake 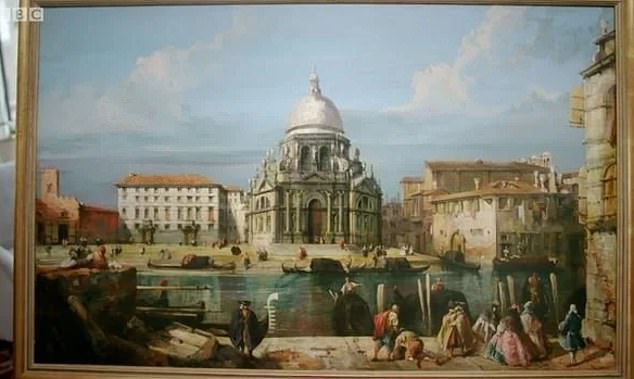 A family that brought an 18th century Venetian canvas to the show in 2019 saw their dreams of owning a masterpiece shattered.

Publisher Nick Hopkinson hoped the picture, purchased by his great-grandfather 100 years ago, would prove to be by Canaletto’s contemporary Francesco Guardi and worth £10 million.

By the time the experts had finished X-raying, carbon-dating and spectrum-analysing the work — wielding lab equipment including the marvellously nicknamed ‘Gun of Truth’ — Nick had found out a lot of things he really didn’t want to hear.

It turned out that great-grandad knew perfectly well when he bought it at auction that this was no Guardi, but faked the evidence — and even spun the family a tall tale. Ouch.

FORTUNE: How expert Philip Mould let a £2million Constable slip through his fingers 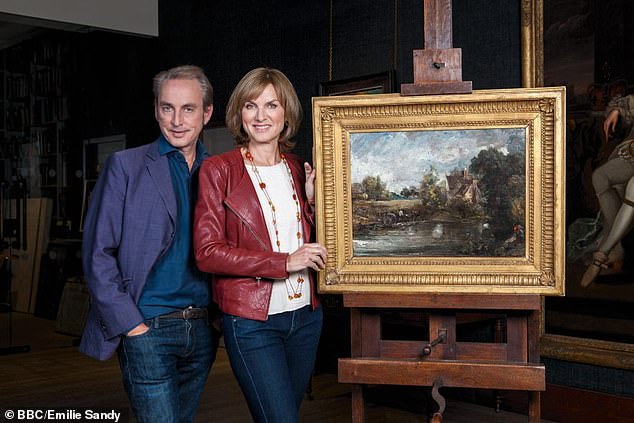 The very series of the ‘art detective’ show saw expert Mould admitting he’d missed out on a huge opportunity.

It emerges that Mr Mould first chanced upon an oil painting while browsing items for sale at a major London auction house in the mid-1990s. He sold the art to a client for the modest sum of £35,000.

However, the show saw experts uncover that the piece was created by the best-known icon of British landscape history – and was actually worth £2million.

It emerged that Mr Mould first chanced upon the painting while browsing items for sale at a major London auction house in the mid-1990s.

As soon as it caught his eye he was convinced it was an original by prominent landscape artist John Constable.

He bought the painting – a sketch depicting an alternative view of Constable’s iconic work The Hay Wain – for £10,000 and set out on a quest to have the work authenticated.

But despite his best efforts the dealer failed not once, but twice, to convince the experts and he was grudgingly obliged to sell it on for £35,000.

Advances in digital technology enabled the team to track down long-buried sales records to build a provenance trail, and scientific analysis such as ultraviolet and infrared photography revealed the painting was in keeping with Constable’s techniques.

The evidence was presented to two of the world’s top Constable experts and, finally, they were able to prove Mr Mould’s original hunch.

FORTUNE: Lost masterpiece by Sir Thomas Lawrence that saw its value jump from £8,000 to half a million pounds 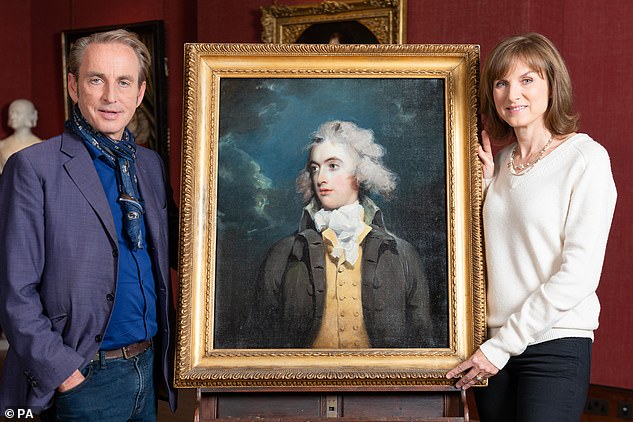 Philip Mould (pictured with co-host Fiona Bruce) discovered a lost masterpiece by Sir Thomas Lawrence which is estimated to be worth half a million pounds in Fake Or Fortune?

In 2019, a painting originally valued at £8,000 turned out to be a lost masterpiece by renowned painter Sir Thomas Lawrence worth half a million pounds, thanks to the show’s detective work.

The 18th-century portrait was originally thought to be the work of pioneering but little-known female artist Maria Cosway.

However, an investigation by the BBC programme revealed it is actually an early work by Sir Thomas – a leading English portrait painter who was known as a towering artist of Regency glamour.

The re-discovered work, which had been passed down through generations in the London-based Cecil family, was given a new estimated value of £500,000.

FAKE: The Henry Moore sculpture used as a doorstop that might have been worth a million – if it was real 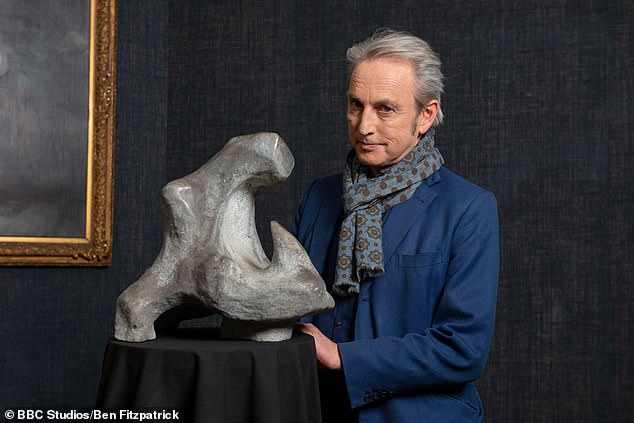 Worth Moore? This sculpture was brought to the show by a couple from Norwich in an episode that aired in July last year 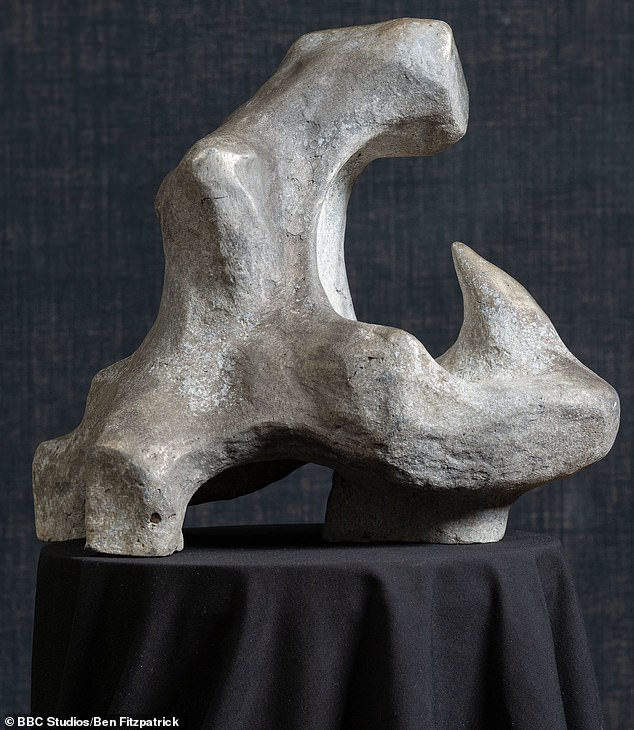 The couple had high hopes that it would see them through their retirement, if experts could authenticate it as a real Henry Moore – but sadly the verification note never came

A couple from Norwich, Neil and Barbara, had high hopes that their garden ornament might just be a lost sculpture by Henry Moore.

The owner had found it hidden under brambles in the garden of an elderly neighbour who had died and left them her property.

The neighbour, Betty Jewson, had been a sculptor herself, though she was better known for more conventional horses and hugging couples.

Used as a doorstop for years, the couple asked the programme to verify whether it was real – worth £1milllion – or was just a large piece of molten metal that would have a scrap value of £50. Alas, the verdict from the show’s experts didn’t find in their favour.

FAKE: The painting by William Nicholson bought for £165,000 and then declared a copy 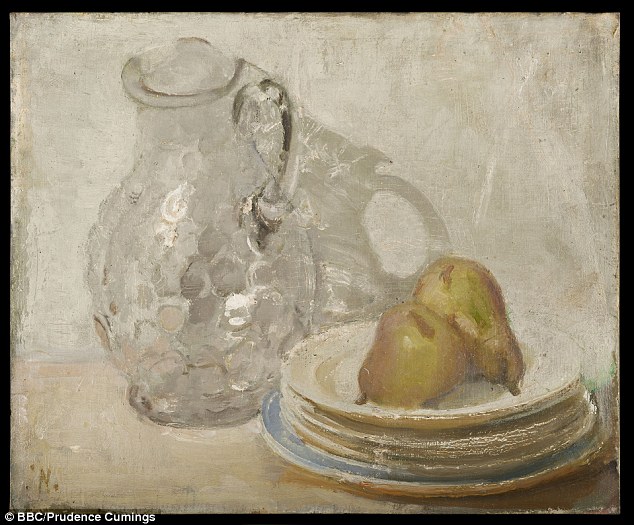 A still life attributed to a largely forgotten English master, William Nicholson, came to the team of experts in 2018. The woman who bought it had paid £165,000 for the painting.

The clues that all was not as it should be came thick and fast. For a start, the monogram signature looked all wrong. An artist who had faked Nicholsons to make money admitted his previous crimes on camera – but said this was not his handiwork.

It was eventually dismissed as a fake – much to the despair of the Mayfair gallery specialising in Nicholsons which had sold it. 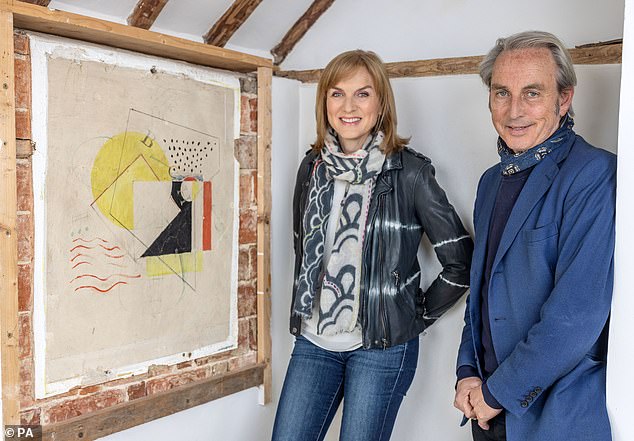 Series ten of Fake or Fortune? sees the story of a painting that’s not on canvas…but directly on the brick wall of a house.

The show’s specialists visited the cottage in Surrey, and found the artwork to be a deliberate and authentic collaboration between two well-known artists.

The couple, Ian and Julie, who’ve lived in their home for 20 years, looked shocked as Bruce revealed the work by established artists Ben Nicholson and Fred Murray was indeed authentic.

The artwork means the house is now worth between £50,000-£100,000 more – although the couple will now have to decide whether to have the piece pulled from the stone wall, or leave it in place.