Follow
Home » Lifestyle » The generation of kids whose time has stood still … they need your direction, Premier

The generation of kids whose time has stood still … they need your direction, Premier

Gladys Berejiklian has started laying the groundwork for the inevitable. As COVID-19 case numbers refuse to budge, and the virus bleeds into the regions, the Premier’s goalposts are shifting.

Berejiklian has repeatedly told us that if vaccination rates hit 6 million by August 28 – one or two jabs or about half of NSW’s adults – then we can hope for some freedom next month. But her talk of “life in September” has morphed into “life in September and October”. 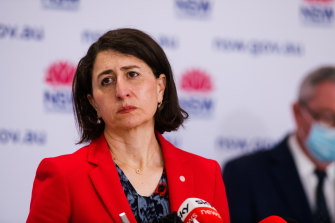 Clearly Sydney’s lockdown is not ending at the end of this month. September will be more of the same. This is hardly surprising given daily case numbers are hovering in the 300s, while the number of infectious people in the community remains close to 100.

Berejiklian’s hints of relaxed restrictions post-August 28 are designed to work as an incentive for people to get vaccinated. But her chief health officer, Kerry Chant, gave a dose of reality earlier this week when she said it was still “too premature” to think about where the state will be in a little over two weeks.

So, NSW remains in COVID-19 limbo. And stranded in this holding pattern is a generation of Sydneysiders. Thousands of students, some as young as five, are learning from home, with no plan for a return to the classroom.

The NSW upper house’s parliamentary inquiry into the latest outbreak reconvened on Wednesday to question Education Minister Sarah Mitchell and department secretary Georgina Harrisson. Mitchell was more cordial than her colleague Brad Hazzard had been the previous day, when the Health Minister had harangued the committee for wasting his valuable time during a pandemic. It wasn’t a high bar for Mitchell to raise. Hazzard at times scoffed at the committee and hijacked Chant’s questions. “I’m the minister,” he snapped.

Despite her more civil responses, Mitchell could not answer the No.1 question on the minds of teachers, parents and students. When will schools return to face-to-face learning? The best she could offer was that it would be after August 28: “We are currently working in terms of a return-to-school plan beyond that date. We haven’t made those decisions yet.

“I’m really cognisant of the fact learning from home is tough. Despite amazing efforts … it is challenging. I will always advocate for students to be back in the classroom as soon as they can in a safe way.”

Labor MP Courtney Houssos pressed Mitchell on a timeframe. The end of October? The end of the year? “I will just repeat what I said before,” Mitchell said. “I’m very aware of how challenging learning from home is.”

There is no doubt the highly transmissible Delta variant has thrown up challenges not experienced in NSW’s first COVID wave. Indeed, one of the strongest messages in 2020 was that schools were safe. That is not the message this year.

Delta is infecting children, including young ones. Childcare centres are reporting cases, and in the past week alone six public primary schools and two high schools have had to close for deep cleaning after positive cases among students. Given the vast majority of students are not on school grounds, these infections show how risky school settings could be, especially because young children are unvaccinated. So too are many teachers. Worryingly, the upper house inquiry was told that the government does not know how many of its teachers are yet to receive a jab.

Like Mitchell, Berejiklian’s priority has also been to see students back at school, although the Premier’s focus has been steadfastly on year-12s. That led to the announcement of a hastily and ill-thought policy, under which all HSC students were to be back on campus from next Monday. It quickly derailed and a watered-down version is in place. Year 12 students can return to school for no more than two hours and only in exceptional circumstances.

Excluded are students from the worst-affected eight local government areas. Instead, a vaccination program is being rolled out to 20,000 teenagers from the COVID hotspots at a special hub at Sydney Olympic Park. The inquiry heard on Wednesday that in the first two days of this program, 6500 students had received a Pfizer jab and half of all eligible students had made a booking for a vaccine this week.

On Tuesday, Berejiklian was upbeat and used one of her favoured terms, “green shoots”, to describe the student vaccine rollout. At this stage of the outbreak, there are a very few other green shoots to be seen, and certainly not for the rest of the state’s students.

Berejiklian may not be able to provide us with a pathway out of lockdown, but she at least needs to give students, parents and teachers some certainty about the final months of the school year, even if that news is bad.

The Opinion newsletter is a weekly wrap of views that will challenge, champion and inform your own. Sign up to receive it here.

Generation, kids, of, t, the, whose
You may also like: