Victoria’s acting Premier James Merlino says it remains unclear whether Labor leader Daniel Andrews will return to work in 10 days, which will mark the end of his planned six-week break as he recovers from a serious spine injury.

Two spinal surgeons said when Mr Andrews did return to his duties, it would almost certainly be on a flexible basis that avoided prolonged periods of standing up and multiple public appearances. 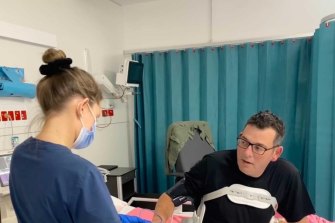 Daniel Andrews shared this photo in March when he was moved from ICU at The Alfred hospital.Credit: Supplied

The Premier has been recovering at home since March 15 when he was discharged from The Alfred hospital with a fractured vertebra and at least five fractured ribs after slipping on stairs at a rental beach house on the Mornington Peninsula.

He announced he would take a leave of absence for at least six weeks.

Wearing a back brace every day and undertaking physiotherapy, the only public update the Premier has shared was on April 4 when he revealed he was “making steady progress” and walking a maximum of 18 consecutive minutes.

His government will deliver its 2021 state budget on May 20, when Mr Andrews would normally make multiple media appearances on the day and in the preceding weeks. 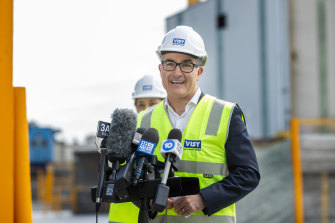 Asked whether April 26 was a realistic return date for the Premier, Mr Merlino said his doctors were yet to make an assessment.

“Dan will be back based on doctor’s advice,” he said.

“So over the next couple of weeks he’ll get advice from his doctors in terms of when it’s appropriate to return.

“They’re pleased with his recovery. But as we know, it was a really nasty injury and a painful recovery.”

Pointing to the long rehabilitation period for back injuries, the acting Premier referenced Mr Andrews’ admission he was “very lucky” to avoid permanent spinal cord damage in the fall.

“Over the next few weeks he’ll be discussing with his doctors what does a return to work look like, and when?” Mr Merlino said.

He said Mr Andrews was in “regular contact” with both himself and his chief of staff, Lissie Ratcliff.

“We’re in regular contact on the big issues but for the most part both myself, his office, our colleagues, we’re leaving him alone to focus on his recovery,” Mr Merlino said. 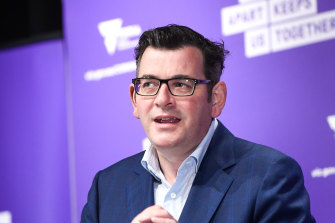 Mr Andrews’ office said it had no further updates beyond Mr Merlino’s responses.

Melbourne spinal surgeon Michael Wong said six weeks would be a “very early” time to return from a fractured T7 vertebra because that was the minimum period for bone healing.

Dr Wong said based on a general recovery from a fractured T7 vertebra there was a “reasonable chance” Mr Andrews would be back in the public eye for at least some of the budget on May 20 but the Premier would generally be restricted to office work in his first weeks back.

“There is no doubt he will get some pain if he works prolonged hours with prolonged physical activity,” Dr Wong said.

Orthopaedic surgeon John Cunningham said while it may appear counter intuitive, Mr Andrews achieving 18 minutes of consecutive walking after four weeks of recovery was a reasonable achievement that was on par with a standard recovery time.

“He could probably stand for longer than that now. This would also be the time they’d be getting more imaging, assessing whether his spine has healed in the right place and how much it has healed,” he said.

“It’s possible he will be able to return to office duties after six weeks. It will depend on when he thinks the pain won’t be distracting as he weans off the brace.”

If, M, Need, Premier, Unclear, will
You may also like: