Two seemingly unrelated, yet highly significant, events occurred on November 27, 2020 that will likely shape the future of Australian TV and culture for years to come.

On that day, the former Coalition government released a discussion paper reigniting debate about what kind of regulation broadcasters and international streaming services like Netflix, Amazon and Disney+ should be subject to. One of the key issues was that of content quotas. 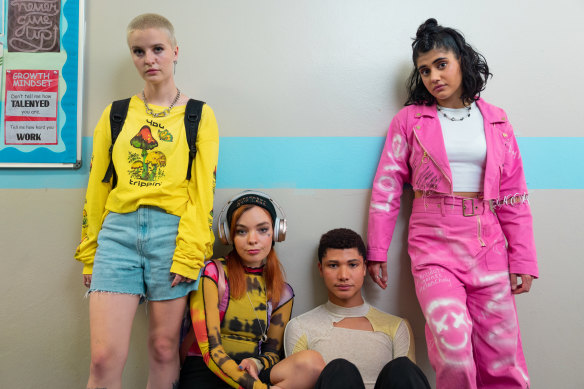 Should streaming giants be forced to produce a minimum amount of Australian content, or set aside a portion of their revenue to invest in local productions? It’s a proposal that has met stiff resistance from the streamers, but is backed by many in the local industry as a way to support jobs and ensure Australian stories are told on screen.

On the very same day the government’s discussion paper was released, Netflix dropped the complete original series of Australian teen classic Heartbreak High on its platform. The show was warmly received by audiences, and reportedly made the list of the most popular 25 local titles on Netflix.

Two weeks later, no doubt buoyed by the love showered on the original, the streamer announced it was rebooting the show with a new creative team and cast, in one of its biggest local productions to date. The announcement raised eyebrows because it landed right in the middle of a heated debate about whether companies like Netflix were spending enough on Australian content.

Cynics argued that the high-profile reboot was an attempt to convince policymakers that Netflix valued Australian stories and local productions, and didn’t need to be regulated.

Fast-forward to this month and Heartbreak High has been released, receiving both critical acclaim and huge audience response – featuring in Netflix’s list of top 10 shows around the world in its first week. But the cynics have also been proved right.

On Monday, the Australia New Zealand Screen Association, a group made up of multinational entertainment companies including Netflix, descended onto Parliament House to make their case against content quotas. Their weapon? Heartbreak High.

The organisation’s chief executive, Paul Muller, told this masthead that “streaming services are making fantastic local shows,” pointing to Heartbreak High, and argued that additional regulation could lead to less investment in local content. To back up that seemingly paradoxical argument, ANZSA pointed to a study by Frontier Economics that apparently showed countries with the strictest broadcasting regulations invested less in local productions per capita.

If that sounds confusing, that’s because it is. The study did find that some countries, like China and India, have some of the strictest regulations in the world, and invest less per capita. Leaving aside the absurdity of comparing Australian per capita investment to developing nations with populations of over one billion people, the study doesn’t specifically examine the impact of content quotas but takes in a broad range of different regulations including controls around advertising and the makeup of corporate boards.

Still, it found that countries like France, Japan, Canada and Korea had a stricter regulatory arrangement than Australia while also having greater investment in local TV productions.

Which brings us back to Heartbreak High. It’s possible that Netflix would have always commissioned a local show like it, regardless of the political debate currently underway. But the fact that the streaming sector was so quick to use the show to argue that everything’s fine and more rules aren’t needed has, unfortunately, dragged a popular and critically successful piece of Australian art into a murky political debate dominated by corporate self-interest.

It’s let down everyone who has worked hard on the show, and the fans who feel drawn to its diverse characters, by turning something meaningful into a crass lobbying tool. It’s also just a bewildering argument. The success of Heartbreak High will surely spur on debate around how to get more shows like it made, and what policy mix will get us there.

Other streamers like Disney+ have also announced a raft of Australian productions, no doubt hoping to convince lawmakers that they are committed to local investment and don’t need to be forced into it. The numbers, though, remain dire. A federal government discussion paper released in February found that Netflix, the most popular streaming platform in Australia, is estimated to devote only 3.3 per cent of its catalogue to Australian content. Apple TV+ had zero per cent, and Disney+ had 0.1 per cent.

There may be solutions other than content quotas to help encourage more investment from companies that are making hundreds of millions of dollars in revenue from Australians. But we at least deserve an informed debate with real facts – not an attempt to capitalise on the emotion of one popular new show that has Australians excited about seeing themselves represented on screen, something that is sadly all to rare.