Nothing can possibly prepare you for hearing your child’s last exhale.

It feels like your heart shatters into a million painful pieces and the world comes to an end. The world as you knew it.

It had been a 12 year battle but one that we ultimately lost.

My life would never be the same again, just like it had flipped the moment she was born in October 1995.

I was nearing the end of the first trimester and looking forward to the constant nausea easing. We were delighted to be expecting again, the three-year age gap was planned.

My first daughter was already a happy, chatty, social toddler.

When her playmates got chickenpox, I didn’t really think about it, nor when she herself got infected. The mothers were delighted the virus was doing the rounds to ‘get it done’. Everyone was so relaxed.

A couple of weeks later I started feeling unwell, the tell-tale fluid filled spots on my torso making the diagnosis obvious.

I was surprised because I didn’t know I hadn’t had chickenpox as a child growing up in Norway.

I went to the GP, concerned about the baby. I was aware of the dangers of measles to pregnant women, I’d heard the horror stories, but chickenpox?

The foetus would be fine, I was told, the virus wouldn’t cross the placenta. When I relayed this to my American father, he was worried.

‘Are you sure about this? It’s a known danger here in the US,’ he said.

‘Well, that’s what the doctor said, so I’ll have to go with it,’ I replied.

But I was unsettled, and as the weeks went by I didn’t get back to my strong, healthy self, to ‘blooming’ like I had done in my first pregnancy. Instead, I felt tired, weak and lethargic. I felt off. 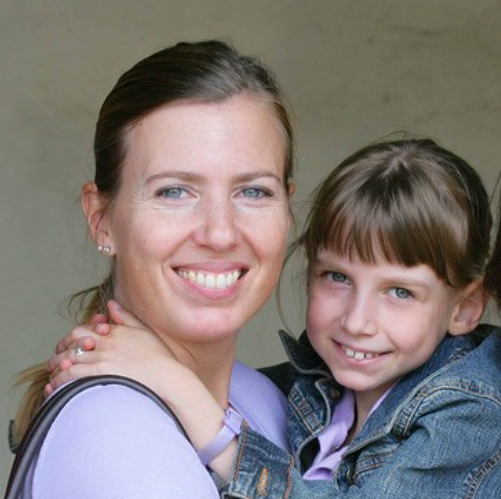 Entering the third trimester I became concerned at how big my belly was becoming. An ultrasound scan revealed a smallish baby floating around in a lot of amniotic fluid.

The radiographer queried the look of the baby’s bowels but the consultant who came to check said all was well and sent me home. This not only left me feeling dismissed and powerless but even more worried.

A few weeks later I went into labour.

Francesca’s complicated body dumbfounded the medics, they had not seen it before. The bowel issue turned out to be a random 10cm narrowing in the duodenum, a life-threatening situation that was fixed by surgery when she was 10 days old.

The mute cry that she emitted was more complicated. It took several medical teams to conclude she had vocal cord paralysis.

Her epiglottis was also faulty, meaning she leaked fluid and food into her lungs when she swallowed.

Our life turned into a nightmare of constant hospital visits, some of them emergencies. Each faulty part of her body was dealt with by a medical specialty (five in total — neurology, respiratory, ENT, gastrointestinal and orthopaedics) but no one coordinated her care or indeed, saw her as a whole. We became the project managers, which was exhausting and frustrating.

I kept saying that surely the cause was chickenpox. What were the circular scars on her torso and legs if not?

Without any existing case studies, however, I felt there was reluctance from the medics to agree with my theory. It didn’t change what we were dealing with.

After two years of hospital treatment, with Francesca using a tracheostomy to aid breathing and a gastrostomy for tube feeding, there were no more interventions to be done.

There was no official diagnosis or prognosis. We set sail into the unknown but I felt instinctively it would be short.

The virus had mercifully left her mental faculties untouched and Francesca grew into a charming, funny and engaging little girl.

One vocal cord regained function so she could speak, albeit hoarsely. The tubes into her throat and stomach were eventually removed.

Francesca’s life developed in line with her limitations and the family made sure it was as full and normal as possible.

Due to the frequency of lung infections and her general frail health, Francesca was mostly home-schooled, but she attended primary school as often as she could where she managed to make some friends.

When not playing with her older sister with whom she was very close, Francesca enjoyed birdwatching and identifying flowers in the beautiful nature reserve around near the house.

She was a shining light and we rallied around her with love. She taught us to see and appreciate beauty in all things, however small. A bird. A flower. A picnic. Despite her discomfort she emanated joy.

But sadly I was right and Francesca died just after her 12th birthday.

One Saturday she collapsed from respiratory failure and was taken to hospital where it became clear there was nothing more to be done.

We were allowed to take her home on the following Monday where we could all be together and she could die peacefully.

Congenital Varicella Syndrome – a condition caused by maternal chickenpox – is now a known disorder and is listed on the US Rare Disease Database website.

The warning to pregnant women is clear. I’d like to think we blazed the trail and I’m glad there is recognition of the fatal danger of chickenpox. There is a vaccine, but in the UK ‘it is currently only offered on the NHS to people who are in close contact with someone who is particularly vulnerable to chickenpox or its complications’.

Francesca has been gone for 14 years but is never far from my thoughts.

The loss precipitated a spiritual crisis that took me a long time to resolve and culminated in a book describing my healing journey.

Not for the Last Time is the uplifting story of how I went from just surviving to thriving.

Of how I met the people I needed to meet and travelled to places I needed to go in order to come to a profound understanding: that nothing is so bad that good can’t come from it.

Was it fair that Francesca contracted a rare illness that the doctors had not encountered before and died? No, but there is no learning in that, only pain.

We all have the capacity to face our fears and overcome what may seem an insurmountable challenge.

But the reward is the discovery that grief from any kind of loss gradually recedes into peace, and in the letting go lies a more fulfilling life.

Ultimately, I found the meaning of Francesca’s short life and the purpose of my own: to always live fully with gratitude and joy.

This was the gift she gave us. Because life is precious and we don’t know how long we’ll have it.

Mina’s book is available on Amazon and through her website.