Follow
Home » Lifestyle » Why everyone is watching The Watcher, Netflix’s latest true-crime hit

Why everyone is watching The Watcher, Netflix’s latest true-crime hit

For the second time in a month, Netflix has quietly released a true-crime series created by Ryan Murphy (American Horror Story, Glee) which has quickly become the most talked about show on the platform.

First came Dahmer – Monster: The Jeffrey Dahmer Story, which was released on September 17 and snowballed into one of Netflix’s most-watched debuts on record. After just 12 days, Monster had been viewed for 496.1 million hours despite the streamer doing very little promotion for the series or providing critics screeners in advance.

And now we have The Watcher, another series that features all the classic Ryan Murphy traits: strange neighbours in the suburbs, large creepy homes and a stacked cast. Based on a true story, The Watcher premiered last week and has swiftly moved to the top of Netflix’s top 10 list, knocking off Monster.

So, what’s the big deal and is it worth your time?

OK, hit me with it. What is The Watcher about?

The Watcher is loosely based on a true story about a couple, Derek and Maria Broaddus, who buy a sprawling home an hour outside New York City at the coveted address of 657 Boulevard. But before they even move into the house, they start receiving threatening letters from someone calling themselves “The Watcher”.

Indeed. Although the story was actually first the subject of a 2018 New York Magazine story, The Haunting of a Dream House by Reeves Wiedeman.

So, what was actually in the letters? I guess they weren’t ‘give me a shout if you need some sugar’-style notes?

Not exactly, although the first letter started pleasantly enough. “Dearest new neighbour at 657 Boulevard,” it read. “Allow me to welcome you to the neighbourhood.”

Oh, cute. See, you just don’t get that kind of wholesome hospitality in the city.

But it quickly took a much darker turn. “Do you need to fill the house with the young blood I requested?” the letter’s author went on to say. “Better for me. Was your old house too small for the growing family? Or was it greed to bring me your children? Once I know their names, I will call to them and draw them to me.”

Ah, the phrase “young blood” definitely makes it less wholesome. So how did we get from real-life letters to the Netflix series?

Naturally, this story piqued the interest of Ryan Murphy (American Horror Story, American Crime Story) and he recruited Bobby Cannavale and Naomi Watts to play Dean and Nora Brannock, a fictionalised version of the real-life couple. 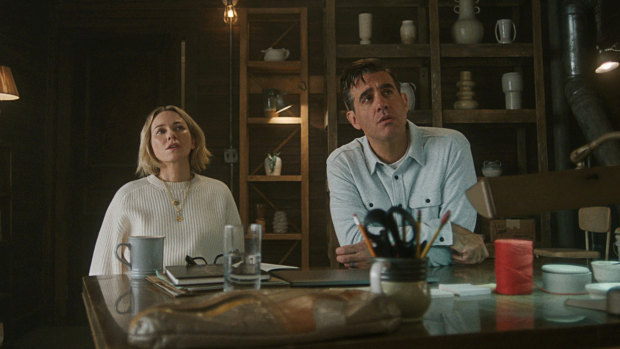 Naomi Watts as Nora Brannock, Bobby Cannavale as Dean Brannock in The Watcher.

Speaking of the real-life couple (no spoilers), are they OK? Surviving, thriving?

Surviving, yes, but maybe not thriving. Following the success of The Watcher, journalist Reeves Wiedeman has written a follow-up that offers some insight into how Derek and Maria Broaddus feel about their trauma being packaged up for TV.

Bingo. According to Wiedeman, “they had little interest in giving someone the right to make a piece of entertainment out of the worst years of their life.” But they suspected Netflix would make the show anyway, so cutting a deal offered them some semblance of control. Apparently “the money from Netflix didn’t even cover their losses on the house”.

Wiedeman says the Broadduses have not seen the show nor do they plan to watch it.

But despite this, audiences are watching The Watcher?

Watching it and loving it. Some are calling the series Ryan Murphy’s best show in years, and it is the number-one show on Netflix right now. While others are saying how unnerving the series is and how scared it’s making them feel in their own homes.

That’s the benefit of living in a one-bedroom. There is nowhere for murderers to hide.

Anything else I need to know?

Oh, Jennifer Coolidge is in it!

Way to bury the biggest selling point. Who does she play?

Got it. Time to binge.

The Watcher is available on Netflix.