There are so many phrases I really don’t understand. “Gym junkie” is one. “Internet influencer” is another. But the hardest to understand is “retail therapy”. This is the idea that shopping is fun and can be used to improve a dismal mood.

Are you kidding? Shopping, I’ve always thought, is the fastest way to create a dismal mood.

First, there are the prices. Sometimes, reading the advertisements in the newspaper, I find myself snorting tea out my nose.

“There’s an advertisement here,” I say to Jocasta, “that suggests we purchase a washing machine/dryer combo with a price tag of $4000. Who is buying this device? Are they insane? What does the machine do after it launders your clothes? Does it make French toast? Does it negotiate peace in the Middle East?”

Jocasta says, “I don’t care what people buy. Maybe not everyone is a cheapskate like you. Not everyone believes that you should always buy the second cheapest item, whether it’s a can of tuna or a new car”.

Never have I been so insulted. The “second cheapest in every category” has been my talisman, my trusty guide in uncertain times. It’s so deep in my heart it probably should be covered by Morrison’s religious discrimination bill. I might give the Prime Minister a call and ask him if he’d mind charging Jocasta with apostasy.

When I was a young man, in the decade known as the 1970s, the “second cheapest” mantra guided me to the marvel that is International Roast coffee. It was cheap, but not as cheap as Pablo. If you added sugar to a spoonful of International Roast, then a splash of milk, and then worked the combo into a frothy paste before adding the boiling water, it was almost as good as a store-bought cappuccino. And it was much cheaper. A “cheapuccino”, if you will, that still proved you were one rung above the Pablo.

Similar price points offered themselves in various categories including those of biscuits, pasta and cask wine.

With the cask wine, the self-talk went this way: “$3.99 for a cask of white wine? I don’t think so. That’s a lot of wine for very little money, even considering that this is the ’70s and everyone else is drinking beer. Myself? I’m a connoisseur. For me, it’s $4.99 for five litres of Moselle. Because I’m worth it.”

This attitude, I must confess, is past. I now buy bottled wine, mostly delicious shiraz from Victoria’s Heathcote region, at the price point of $16. In terms of Heathcote Shiraz, it’s the second-cheapest.

I decide to return to the matter of the newspaper advertisement. I say to Jocasta: “But don’t you agree the prices are a bit steep?”

‘Not everyone believes that you should always buy the second cheapest item, whether it’s a can of tuna or a new car.’

Jocasta considers for a moment. “Probably. All the same, that second-cheapest pasta is giving me indigestion. Would you consider shifting to the third cheapest?”

Of course, the ridiculous prices are only the first problem with shopping. There’s also the matter of deciding what product to buy. When buying appliances, people say you should go online and check the customer reviews. These consist of 440 reviews, each of which says the exact opposite of the previous one.

This coffee machine is either a five-star thing of wonder or quite the worst product that’s ever been placed on the market. After an hour of reading reviews, each contradicting the last, you’ll lose all faith in humanity, limping off to the kitchen to make yourself a cup of International Roast.

Having given up on the purchase of a new appliance, you might instead decide to buy some new clothes. This involves standing in a small cubicle, bristling with mirrors, appraising the size of your own bottom.

They say that Buddhist meditation dissolves the ego, but it’s nothing on 10 minutes in Just Jeans. Maybe the word “retail therapy” refers to the 52 sessions with a psychotherapist necessitated by the sight of yourself in a slim-fit shirt. 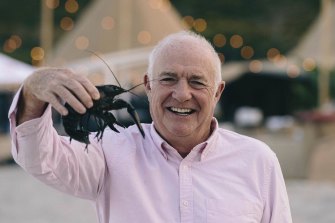 I half expect to see Rick Stein (pictured here selecting a WA marron).

A trip to the supermarket should be safe, I hear you say, since we all like food. Yet down at the local Colesworths, they’ve decided to move everything around. They seem to be going for the ambience of an Italian street market. It’s all fish in buckets of ice, sitting on the floor in a way that I find slightly unhygienic, and tomatoes in wicker baskets. I half expect to see Rick Stein picking through the herbs and a Florentine fishmonger singing opera arias.

The result is you can no longer find anything and are condemned to wander the aisles, hoping to chance upon the pasta section, while occasionally sidestepping a dangerously placed tub of fish.

Better perhaps to retire to the newsagency, where one can at least browse the magazines. It’s a good idea in theory, although the newsagency has now been converted into a mini-casino and you can hardly get in the front door without breathing in cancer-causing quantities of Scratchie dust.

Still, if you can beat them, you might as well join them. If I pick up a $2 Scratchie – it’s the second cheapest – I might win enough to one day afford a new washing machine.

Do wish me luck.