First she tried to cut in line… then she crossed it.

Gas is running low in North Carolina — and tensions are running high.

It even turned physical at one gas station near Raleigh on Tuesday when a driver tried to sneak her way into a lengthy queue, and things ignited.

The fight was filmed by another motorist stuck further back as cars patiently waited for their turn to fill up at the pump; but one driver clearly didn’t feel like going to the back of the line. 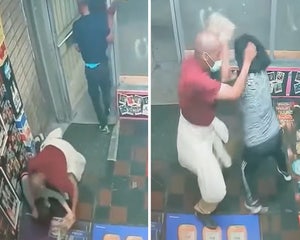 The clip shows two Hondas, wings touching as the white sedan tries to force its way in front of the silver SUV — whose driver is clearly not having it.

“Buddy in the Honda trying to cut in like, what the f— are you doing bro?” the filmer commentates.

But it’s not a bro; it’s a woman who appears to think she has a rightful place in the middle of the line, and jumps out of her car to let the other driver know. Storming up to his driver’s side, she screams something at him — before appearing to spit in through the window.

Her piece said, she returns to her car, speaking to someone on speaker phone the whole time. But the other driver followers her back and returns the favor, gobbing straight into her face.

The furious woman immediately retaliates, swinging blows at the man’s head, her phone scattering across the roadway. The man doesn’t hit her back but tries to restrain her, as she claws blindly at his face. She even manages to rip his t-shirt off.

Sensing his only means of escape is a distraction, he boots her dropped phone clear across the street and points to it, which indeed seems to work. With a final punch, she lets him go and heads for her phone. 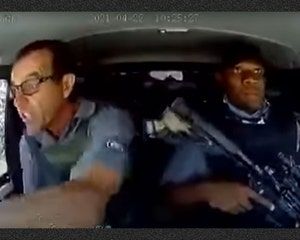 The whole time, a third motorist stands watching them brawl mere feet away, grinning at the spectacle.

The gas shortage is being caused by a cyber attack carried out on the Colonial pipeline last Friday.

The line, which normally carries 100 million gallons of gasoline and other fuel every day from Houston to New York, is one of America’s most vital fuel arteries. The 5,500 mile system brings almost half of all fuel consumed by the whole East Coast.

The attack has triggered panic buying and sent gas prices climbing; some chains have imposed a $50 limit on all customers.

According to CNN, as of Tuesday night, 12 percent of gas stations in North Carolina have already run dry.

On Monday, the FBI confirmed the ransomware attack was the work of a Russian criminal group named “DarkSide”.

Ransomware attacks have been snaring bigger and bigger targets, prompting calls for the US to dramatically step up its cyber security.

Ferris Wheel Operator Attacks Mom Getting Off With Kids, Gets Beaten Up by Crowd

at, Brawls, man, Pumps, With, woman
You may also like: