Follow
Home » Lifestyle » ‘You can achieve anything in this country’: Albanese on his Italian roots and modern Australia

‘You can achieve anything in this country’: Albanese on his Italian roots and modern Australia

Labor leader Anthony Albanese says the fact he could become the first non-Anglo-Celtic prime minister in Australian history sends a clear message that “you can achieve anything in this country”.

The Sydney Morning Herald and The Age asked Albanese on Thursday if he had thought about what it would mean to Australia’s multicultural communities to have an Italian-Australian as prime minister, and the first Muslim member of a federal cabinet in Ed Husic. 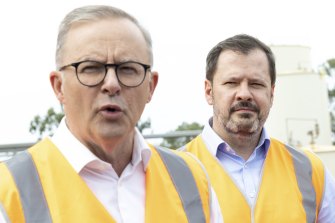 Anthony Albanese and his industry and innovation spokesman, Ed Husic. “Modern Australia is made up of people called Husic and Albanese,” the Labor leader says.Credit:Alex Ellinghausen

“I have absolutely [thought about it]. And I’m heartened by the response that I have [had], particularly from the Italian community,” Albanese said, adding he’d be at the Marconi Club in western Sydney next Wednesday.

“There are members of the Italian community saying to me that they are going to vote Labor for the first time in their life because they want an Australia that reflects modern Australia.”

Albanese often speaks about growing up in public housing in inner-city Sydney with his mother Maryanne. He grew up believing his father had died soon after meeting his mother on a European cruise but later discovered Carlo Albanese was alive and living in Italy. Out of respect for his mother, he did not track Carlo down until after her death, but was then welcomed into his life and found he had a half-brother and half-sister, according to biographer Karen Middleton.

“We’re a diverse country, and the fact that I have a non-Anglo-Celtic name and so does our Senate leader [Penny Wong] as well, I think it sends a message out there hopefully to multicultural Australia that you can achieve anything in this country.”

Senator Wong was the first Malaysian-Australian to serve in a federal cabinet, during the Rudd and Gillard governments.

“It’s a good thing that we have in Queensland a premier called Annastacia Palaszczuk, that we had in NSW a premier called Berejiklian, that in Victoria we had Steve Bracks of Lebanese descent and a fellow called Peter Malinauskas just elected in South Australia. I think it’s a very positive thing.”