Follow
Home » Lifestyle » ‘You need to be strong’: Ukraine tells Australia pressure on Russia will work

‘You need to be strong’: Ukraine tells Australia pressure on Russia will work

Volodymyr Shalkivski, the eastern European nation’s charge d’affaires in Canberra, said while the threat of war with Russia was “real” he said there was no need at the moment for panic. 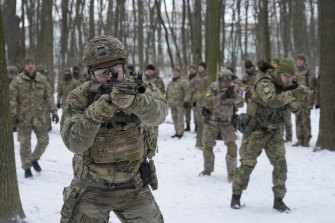 Volunteers in Ukraine’s Territorial Defence Forces train in a city park in Kiev.Credit:AP

The United States and NATO told Russia on Thursday there would be no concessions on Moscow’s main demands to resolve the crisis over Ukraine as concerns among Western allies grow that time is running out to persuade President Putin to step back from conflict.

French President Emmanuel Macron was expected to speak to Mr Putin by phone on Friday while British defence secretary Ben Wallace will fly to Moscow in the coming days in an attempt to persuade the Kremlin to back down.

Russia’s ambassador in Australia, Aleksey Pavlovsky, will address Australian media on Friday morning about the situation, having previously claimed Russian troops at the border were “not a threat” but a warning to Ukraine “not to attempt any reckless military adventures”.

Mr Shalkivski said while the threat at the eastern border remained he said the situation in the rest of the country remained safe. He said he was hopeful there was a way to de-escalate the tensions with Russia and move forward.

“We are facing reality… we are preparing for worst-case scenario, but we hope for better, that negotiations will succeed and there will be de-escalation… We’re confident there is a way out of this situation.”

Australia has ruled out direct military aid to Ukraine but will help the nation defend itself against a wave of cyber attacks while Russia assembles an estimated 127,000 troops on the country’s border.

Australian LNG exporters are also preparing to fill energy shortages across Europe if Russia cuts off gas supplies, with the federal government pledging to support “friends and allies” caught up in the escalating stand-off.

Mr Shalkivski said Australia has the biggest sanctions regime in the Indo-Pacific towards Russia and urged its Western allies to make a decision on whether to take further action “fast”.

“There is a strong political message that Kremlin receives from many countries … there is no way one country can dictate something in terms of its foreign policy to a neighbouring country in the 21st century,” he said. “We rely on the international stance, position in supporting Ukraine’s sovereignty and independence.

“We will appreciate any support that reinforced our defence capabilities.“

Defence Minister Peter Dutton said on Thursday the international community must “put as much pressure on Russia as possible” to prevent a “devastating” invasion of Ukraine.

He said Mr Putin was an ageing dictator, who wanted to leave a legacy but was becoming “more and more irrational”.

“Now, whether or not they listen to that, ultimately, is a decision for Putin, and he sees no doubt that Ukraine is part of the Russia that he wants to bequeath to his successor at some point,” Dutton told Sydney radio station 2GB.

He said an invasion of Ukraine “would be devastating because it would disrupt world economic markets” and have an effect on energy security in Europe.

“But more importantly than any of that is that you’d see tens of thousands of people die.”

The European Union’s ambassador to Australia, Michael Pulch said he remained concerned about Russia’s “threatening behaviour” along the Ukrainian border and the union’s 27 member states would respond should Russian troops invade.

“We call on the Russian government to de-escalate the current situation and to return to diplomatic consultations to address their concerns,” he said.

“We’ve made it very clear that we would respond, united with our trans-Atlantic and NATO partners, and also with the international community on such an action.”