Follow
Home » Lifestyle » ‘It’s time they came back to the mainland’: Coalition MPs call for Biloela family to stay

A powerful coalition of peak medical groups has called on the Morrison government to immediately release a Tamil family from Biloela from detention, as a growing number of Coalition MPs call for the four asylum seekers to be returned to their Queensland home.

Priya and Nades Murugappan – and their two Australian-born children Kopika and Tharnicaa – have sought refuge in Australia since 2012. 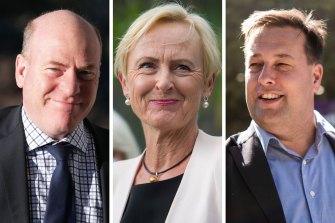 Katie Allen, Trent Zimmerman and Jason Falinski have called for the return of the Biloela famiy to the mainland. Credit:Composite

Liberal MPs Katie Allen, Trent Zimmerman and Jason Falinski expressed support for the family on Saturday, calling for an end to their three years in detention and for permanent settlement in Biloela.

“It’s been a difficult case but the saga has to end,” Mr Zimmerman said. “It’s time they came back to the mainland and are allowed to settle in the community that has so strongly embraced them.”

Mr Falinski, the member for Mackellar on Sydney’s northern beaches, added: “As the son of someone who was effectively a refugee, how can I disagree with him?”

In 2018, the Murugappan family were denied a visa to remain in Australia and put into immigration detention. The following year they were transferred to Christmas Island, at a cost of $6.7 million and counting.

Tharnicaa turned four on Saturday and is currently in a Perth hospital suffering from sepsis caused by untreated pneumonia. The family have lost their attempts to gain refugee status in the courts, but earlier this year the Federal Court ruled Tharnicaa had been denied procedural fairness.

Dr Allen, a paediatrician before entering Federal Parliament as the member for the Melbourne seat of Higgins, told The Sun-Herald and The Sunday Age a ministerial intervention was required.

“We urgently need a timely resolution to a situation that is endangering the health and wellbeing of innocent children. This has gone on for too long,” she said. “We must look at alternatives such as Section 195A of the Migration Act to solve the legal impasse and give this family a chance.” 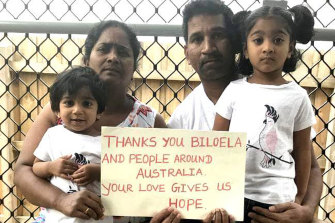 Priya and Nades Murugappan and their Australian-born children, Kopika and Tharnicaa.Credit: Supplied

Immigration Minister Alex Hawke is now reviewing the case to determine whether to lift the “bar” preventing Tharunicaa lodging another visa application.

Nationals MP Ken O’Dowd – whose Queensland electorate includes the regional town of Biloela where the family lived before being detained – has urged Mr Hawke to let them settle in Australia.

In the letter, the peak medical groups said they were ”extremely concerned” about the family’s ongoing imprisonment.

“Being held in detention presents an extreme and unacceptable risk to children’s health, development and mental health,” they wrote.

“These risks are particularly high for infants and toddlers. If detention is prolonged, the consequences may be long term or permanent.

“It is time for the government to release the Biloela family from immigration detention, as a
renewed sign of compassionate and humane Australian leadership.”

Ms Andrews’ spokesman said she had nothing to add to remarks she made last week. On Thursday she said there was “no obligation for us to provide protection to them, which means that they should be returning to their home country of Sri Lanka”. But she noted the family had an application before the courts.