Jane Garrett will leave Victorian politics at the 2022 election, five years after resigning as emergency services minister during a bitter dispute with the firefighters’ union that sank her career.

Ms Garrett, once viewed as a potential Labor leader, confirmed late on Friday afternoon that she would not recontest the upper house division of Eastern Victoria. 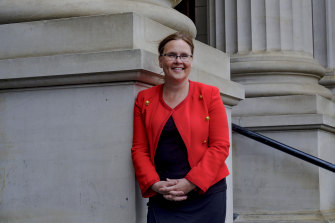 Jane Garrett on the steps of Parliament in 2018.Credit:Luis Enrique Ascui

She is the seventh Victorian Labor MP to announce in the past two weeks they would stand aside.

“It’s a sign of just how strong the Labor Party is when so many people make the call to step aside and give our huge range of talented young people the opportunity to become the next generation of MPs,” Ms Garrett said.

“Today it’s my time to help that shift to renewal.”

She first entered Parliament in the lower house seat of Brunswick in 2010 and was promoted to cabinet as a rising star in 2014 before being permanently sidelined in 2016 when she resigned as emergency services minister. 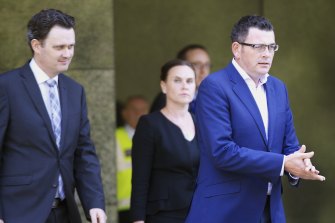 Jane Garrett (rear) with Daniel Andrews in 2015 when she was a minister.Credit:Simon O’Dwyer

The long-running Country Fire Authority dispute, a major issue in the first term of the current Labor government, pitted her against Premier Daniel Andrews and union leader Peter Marshall.

After a bruising preselection and a bout of cancer, she moved to the upper house in the Andrews government’s second term. She never returned to the cabinet.

In an exclusive interview with The Age earlier this year, Ms Garrett revealed that she was still being targeted by bullies in the United Firefighters Union.

The Victorian government in May refused to release a long-suppressed report into sexism and intimidation in the fire services, five years after it was commissioned by Ms Garrett. 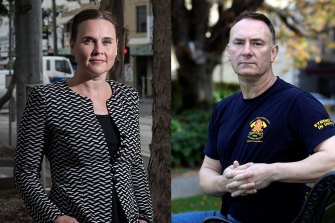 Nominations to run in next year’s state election close next Friday, having been extended by a week at the request of Mr Andrews to allow for “suitable nominees … to be identified” if other sitting members stood aside.

The Premier thanked Ms Garrett for her service to the Victorian Parliament and the Labor Party. He wished her and her family the best.

“Across Jane’s long political career, she has served the Australian Labor Party and Labor governments as a staffer, a local member, a party officer, a parliamentary secretary and a minister,” Mr Andrews said.

“Delivering secure jobs and a quality education for working people has always been at the heart of Jane’s commitment to her work.

“She can be rightly proud of her contribution to our movement and to our state.”

Ms Garrett said it had been a privilege to represent Brunswick, where she was first elected in 2010, and Eastern Victoria.

“I’ve been welcomed into people’s homes, their businesses, schools and community groups and I thank each and every one I’ve met and worked with on the way,” she said on Friday.

“Fighting for jobs, equality, social justice and a first-class education for all has been the mantra of every Andrews Labor government MP and it’s been a loud and proud one.

“I’m grateful I was able to walk this journey with so many wonderful people. And to those who are coming after I wish you all the very best.”

In recent years she lost the support of the CFMEU and its Victorian construction secretary John Setka, a key player in her Industrial Left grouping that split off from the Premier’s Socialist Left faction and contributed to years of instability.

The union’s position meant she was vulnerable to recent pressure placed on about half a dozen MPs to quit Parliament in a hope of generating renewal. Party operative Tom McIntosh is the frontrunner to replace Ms Garrett.

The faction made up of former allies of ousted minister Adem Somyurek was weakened this week by the decision of the CFMEU and rail workers’ union, led by secretary Luba Grigorovitch, to abandon a court challenge against the federal takeover of the ALP.